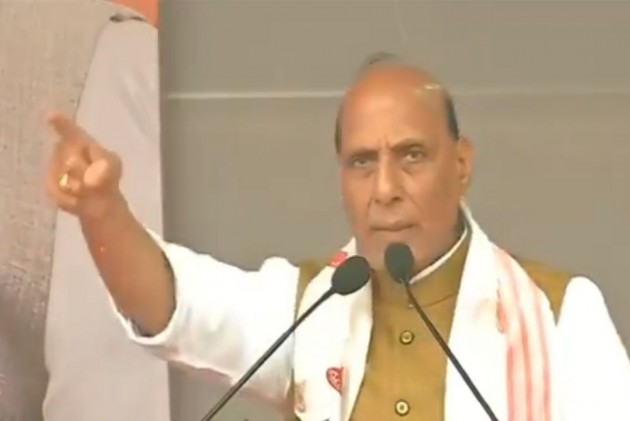 Amid speculation over the number of Jaish terrorists killed in the Balakot airstrike, Union Home Minister Rajnath Singh Tuesday said the figure would be known "today or tomorrow".

He claimed the National Technical Research Organisation (NTRO) system had informed about the presence of around 300 active mobile phones at the site before the February 26 airstrike by India.

Charging the opposition with doing politics over the airstrike, the Home Minister suggested that the Congress party should go to Pakistan and "count the bodies" if they want to know how many terrorists were killed.

We Don't Count Number Of Dead, Govt Will Give Figures: IAF Chief On Balakot Airstrike

"Some leaders of the other political parties are asking how many terrorists were killed in the IAF strike. Today or tomorrow, it will be known. Pakistan and their leaders' know in their hearts how many were killed," Singh said while addressing the public in Dhubri, Assam, after inaugurating a border project by the BSF.

He took a dig at the Opposition for questioning the number of terrorists killed and said the parties were up to, "kitne mare, kitne mare?" (how many died?)

"The NTRO, which has an authentic system, said that 300 mobile phones were active (at the Balakot site). Were these mobile phones used by the trees? Now will you (opposition) not believe the NTRO also?" Singh said.

He said politics should not be done only to form government, but it should be done to build the country.

"If my Congress friends feel that the numbers should be informed to them, then I would like to say that if you want to go to Pakistan, then go, count and ask people there that how many were killed by our Air Force jawans," Singh said.

On Monday,  Indian Air Force chief Air Chief Marshal BS Dhanoa said that the death toll in the Balakot airstrike would depend on the "number of people present in the target" and the casualty figure would be "given by the government".

"The Indian Air Force is not in a position to clarify the number of casualties. The government will clarify that. We don't count human casualties. We do not count how many people were dead. We count what targets we have hit or not," he said.

BJP chief Amit Shah said on Sunday that "more than 250 terrorists" were killed in the February 26 cross-LoC airstrike in Balakot.