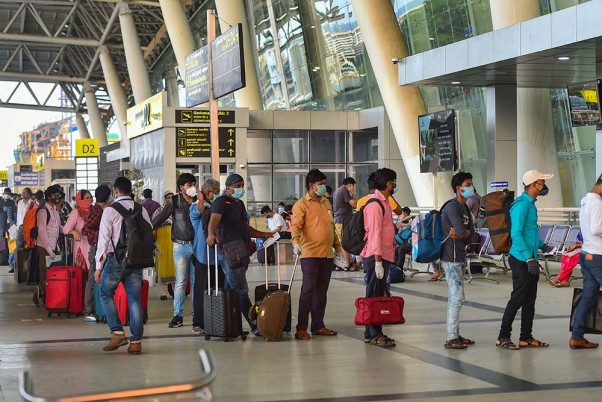 A passenger was arrested for creating ruckus and walking on the baggage belt at the Indira Gandhi International Airport in New Delhi after he was allegedly denied boarding by the airline for not carrying a mandatory RT-PCR test report.

The police on Tuesday said Suraj Pandey, 36-year-old businessman fom Rudrapur in Uttar Pradesh,  turned violent and started shouting. He also got onto the baggage belt and started walking on it and obstructed the airline staff and other passengers.

Pandey was arrested on Monday based on a complaint received from Deepak Chadha, Deputy Manager of Vistara Airlines, they said.

In his complaint, Chadha alleged that the passenger came to IGI Airport's Vistara airline counter for heading to Mumbai by flight number UK933 but he did not have an RT-PCR report and was not allowed to board the aircraft, police said.

The airline official further alleged that around 3 pm

In a purported video of the incident, the man was seen walking on the baggage belt even as he argued with the airport officials and demanded to be adjusted on another flight.

Despite repeated requests, he did not pay any heed to the officials.

In another purported video, he was seen being dragged out of the premises by the CISF officials. He was later handed over to the Delhi Police team for further investigation.

Deputy Commissioner of Police (IGI Airport) Rajeev Ranjan said, "We checked the CCTV footage to verify the complainant's version. From the contents of the complaint, CCTV footage and enquiry conducted so far, accused Suraj Pandey had committed offence under relevant sections of the Delhi Police Act. Subsequently, he was arrested and his medical examination was also conducted."

Since it was a bailable offence, the accused passenger was released by police on bail and will be produced before a court here, he said.

An official statement issued by the Vistara spokesperson said the customer booked the flight from Delhi to Mumbai on June 21 but was not allowed to board the airline as he was not carrying a COVID-19 RT-PCR test report, which is mandatory as per government guidelines.

"In reaction, he behaved badly with our staff and other customers, and his acts threatened the safety of ground operations. We have provided a full refund of the booking to the customer and notified the authorities of the incident," the spokesperson added. Vistara stands firm with its zero-tolerance policy against unruly behaviour or act that endangers the safety, security, and dignity of its customers and staff, the airline further said.