Addressing a rally in Sundargarh in Odisha, Prime Minister Narendra Modi said people across the country have embraced the BJP and reposed faith in the party which can be seen from the fact that the party has formed government in a large number of states. 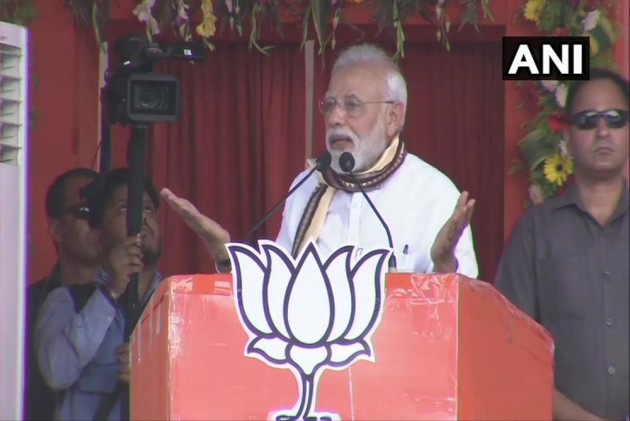 Prime Minister Narendra Modi on Saturday said that while the "chowkidar" has demonstrated courage to hit terrorist safe havens inside Pakistan, the Congress wants to dilute the powers of the armed forces.

The prime minister has on several occasions said he's the chowkidar (watchman) of the country and serves to protect its best interests.

"The chowkidar is fighting terrorists, while the Congress is working to dilute the powers of the armed forces," he said at a rally in tribal-dominated Sundargarh, referring to the party's plan to review the Armed Forces (Special Powers) Act.

"There were governments in the past too, but they could never think of undertaking surgical strikes. They did not have the courage to cross the border by aircraft and kill terrorists," the prime minister said.

The Congress is trying to protect people who shelter terrorists and Maoists, he alleged.

The prime minister said people have to decide whether they want to choose an honest and principled government committed to development of all, or a corrupt and unprincipled one.

"This time lotus will bloom in Odisha. The BJP will taste victory. I can say with certainty that maximum number of lotuses will bloom in the state," PM Modi said.

Similarly, the BJP will again come to power at the Centre as the country needs a strong and decisive government to ensure national security as well as speedy development, the prime minister said.

Only the BJP is capable of providing a strong and decisive government, he said.

Hitting out at the BJD government in Odisha, the prime minster said its intentions are not good and the 2019 polls are significant for the future of Odisha as well as country.

On the 39th foundation day of the BJP, Modi said, "The party was born out of sweat of its workers, not dynasty or money. It came into being and grew manifold with the sweat and
labour of its workers."

"I salute every worker of the Bharatiya Janata Party. The BJP is the biggest democratic organisation in the world. We are now a strong alternative to the Congress and other parties which were born out of it," he said.

Asserting that the BJP all along fought to safeguard democracy, he said lakhs of party workers and leaders were jailed while protesting the Emergency.

There was a time when no one could imagine that the BJP would be able to form government with absolute majority at the Centre, Modi said, claiming that now even leaders of the Congress are now not ready to repose faith in their own party.

Now all sections of society including farmers, jawans, women, youths, Dalits, tribals and backward segments have associated themselves with the BJP, he said.

The prime minister said people across the country have embraced the BJP and reposed faith in the party which can be seen from the fact that the party has formed government in a large number of states.

"Right from the northeast, the BJP's flag is flying all over India as people have given place to the BJP in their hearts," he said.

The prime minister called upon the people of Odisha to bring a "double engine" government by voting the BJP to power both at the Centre and in the state in order to ensure speedy and balanced development.

This was Modi's third visit to Odisha in a week in the run-up to the elections. He had addressed rallies in Jeypore and Bhawanipatna on March 29 and April 2, respectively.

Assembly election in Odisha will be held along with Lok Sabha polls in four phases on April 11, 18, 23 and 29.