All the drum beating about 'Vaccine Maitri' appear hollow when the government is not in a position to deliver health care to its own people. 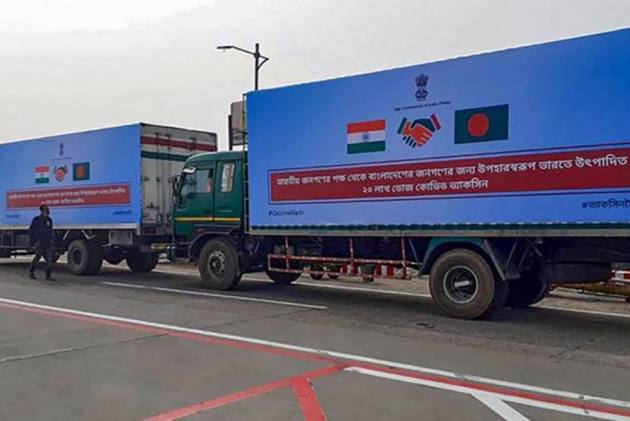 There is no way that India can honour its commitment to provide vaccines when the country is facing an unprecedented health emergency with the essential supply of oxygen, drugs, hospital beds running out.

All the drum beating about Vaccine Maitri appear hollow when the government is not in a position to deliver health care to its own people. This is not questioning the export of vaccines, but questioning the Modi government’s complete mismanagement of the health crisis. Managing the health emergency is the principal task of every government. It is not just vaccinating the people, it is about stepping up domestic supply lines of ventilators, adequate stock of oxygen and ensuring distribution across the hard-hit states. Smaller countries like South Korea and Taiwan have managed the pandemic with rare efficiency, despite not having the advantage India has of being the pharmacy of the world. After the first wave, India seemed to have forgotten about the pandemic, though several countries in Europe were going through a second surge.

Recently, foreign minister S. Jaishankar speaking at an event, took on the critics of the government’s vaccine diplomacy. “As a foreign minister, I'm pushing other countries, particularly some big countries, saying - look, please keep the raw materials flowing for vaccines to be made in India,” news agency ANI quoted Jaishankar as saying at a conclave.

“If you ask why are you exporting (vaccines) at all, somebody will ask - why am I exporting to India. That is so short-sighted. Only non-serious, irresponsible people can make that argument,” he added, according to ANI.

But no one is questioning exports. The point is the Modi government was narrowly focused on winning brownie points on the world stage through its generous sharing of the vaccine. While going ahead with this, the Centre was supposed to keep an eye on what was happening across the world and prepare for the second wave.

Vaccine diplomacy was a good move to boost India’s international image and spread goodwill by coming to the aid of humanity. India had come in for fulsome praise across the globe for its desire to help the world. The World Health Organisation had on several occasions commended India for its desire to act as a responsible global power.

India’s generosity was in sharp contrast to the vaccine nationalism of the rich industrialised world. The US, Britain, Canada and other well-to-do countries were buying vaccines much above their requirements and depriving poorer nations, especially countries in Africa. The rich nations have grabbed 60 per cent of the vaccines, while they constitute just 16 per cent of the global population.

India began its Covid outreach even before the vaccines were in place. India sent out 446 million HQC tablets and 1.54 billion paracetamol tables to 133 countries according to a press release issued at that time. Besides hydroxychloroquine, Remdesivir, the drug used for Covid treatment, as well as diagnostic kits, ventilators, masks, gloves, and other medical supplies were also exported.

Planning for the soft power outreach was meticulous. India first provided vaccine doses to its neighbours starting with Bangladesh and Nepal. So far, 66 million doses of Covaxin and Covishield were sent out to various countries. But exports of the vaccine have come to a halt since last month.

A country like Bangladesh is in a spot having relied heavily on Indian vaccines. India had at the start donated three million doses of the AstraZeneca to Dhaka. Bangladesh had also signed a commercial deal with Pune-based Serum Institute of India (SII) in 2020 to buy 30 million doses of the vaccine. Under the terms of the contract, Dhaka was to receive five million doses of Covishield vaccine per month, from January to June of this year.

However, SII could provide just seven million doses in the first two months. India stopped exports of vaccines last month because of a fresh surge of the pandemic. Bangladesh is scrambling to get sufficient quantities of vaccine. Prime Minister Sheikh Hasina has spoken to her counterpart when Modi was in Dhaka last month. Bangladesh will be looking towards China and Russia if the SII is not able to honour its commitment.

All is however not lost for India. The Modi government has to concentrate on getting its act together and work at coordinating efforts to streamline the distribution of oxygen, ramp up production of essential medicines needed for Covid treatment and demonstrate that it can provide effective leadership at a time of unprecedented health crisis.