Presenting The Past: Tracing History Of Shared Names Across India And Pakistan

India-Pakistan, locked into a hyphenated relationship of a shared history and a divided present, is not just about rift but also about the many vestiges of unity that have survived seven decades. 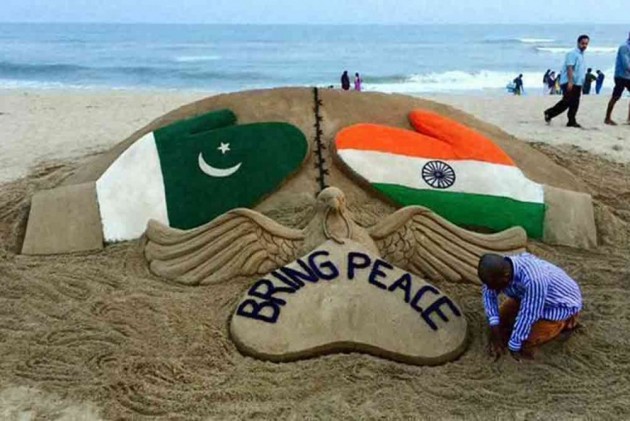 Gujarat in India, Gujrat in Pakistan; Hyderabad here and also there; Delhi Gate in Lahore and Lahori Gate in Patiala. Then there is the favourite sweetmeat of many Indians, the Karachi halwa, while the Pakistanis relish Bengali samosa.

Some names have withstood the uneasy decades since Partition, standing out like little beacons of oneness in a landscape fraught with hostility but also hope between two neighbours sharing a border and age-old cultural ties.

India-Pakistan, locked into a hyphenated relationship of a shared history and a divided present, is not just about rift but also about the many vestiges of unity that have survived seven decades.

It’s about the names of streets, shops, monuments, food and more, say historians and others on both sides of the border.

With the recent escalation in tensions following the Pulwama terror attack, this legacy has come under increasing strain.

The spotlight of unwelcome attention fell on the Karachi Bakery in Ahmedabad and Bengaluru after the February 14 strike, which prompted the first aerial combat between the two countries since 1971 and led to the capture of an IAF pilot by Pakistan on February 27. Abhinandan Varthaman was released almost three days later on March 1.

The managements of the two stores were told by vigilantes to hide ‘Karachi’, Pakistan’s buzzing commercial centre, from their signboards.

Forced to show their Indianness, they also put up a tricolour along with posters reading that the brand established in 1953 is "absolutely Indian by heart".

The ripple effect of fear could be seen in other cities, including in the national capital, particularly the historic walled city.

"All I can tell you is that we are as Indian as anyone standing or doing business in the street out here. Anyone judging our loyalty for this nation by the name of my shop, which is there for over good 50 years now, is despicable," said an Old Delhi based trader.

Scared that he’ll be the target of vigilante groups, he spoke on the condition of anonymity.

Changing existing names alluding to Pakistan is neither nationalism and nor an act of valour, said experts.

"India has Gujarat (state), Pakistan has a district in Punjab called Gujrat. There is a city called Hyderabad in Sindh. India, too, has Hyderabad. Even surnames such as Bajwa, Sethi, Rathore, Chaudhry etc. are used by several people from both countries. We cannot change geography or erase the shared past," Amit Ranjan, editor of the recently released book "The Partition of India", told PTI.

Recounting many delicacies, places and shops named after cities in Pakistan, cultural historian Sohail Hashmi said many places "predate Partition" and the creation of Pakistan.

"There is a locality in Paharganj called Multani Dhanda -- now Multan is in Pakistan -- it predates the creation of Pakistan. Just because the part of India is now Pakistan, these places have to change their name now? We must understand that people carry place names with them when they migrate.

"... Also, there is a specific kind of halwa, which is known wherever it is made as Karachi halwa only. What are you going to do with it, call it Delhi halwa or Patiala halwa?" he asked, referring to the gelatinous sweet made usually of cornflour, sugar and water and quite different in texture from other ‘halwas’.

A quick search on food app Swiggy in New Delhi showed up over 15 restaurants offering dishes such as Chicken Peshawari, Chicken Lahori, Pakistani Chicken Biryani, Paneer Tikka Multani; and a casual stroll in the by-lanes of Old Delhi was enough to come across shops and places named after Pakistani cities.

This is a part of the subcontinent’s intangible history that nothing can erase.

Flagbearers of the deep cultural ties on the other side of the border include Madras Jewellers with branches in several cities and Karachi's Delhi Colony. There is also the upscale Bombay Chowpatty restaurant with branches in Lahore, Islamabad, Gujrat, Faisalabad and Karachi.

"There is also Amritsari Sweets in Lahore, while Bengali samosa in Islamabad is supposed to be the best samosa in town. In Lahore, there is Delhi Darwaza while in Islamabad there is a restaurant by the same name that serves the best nihari in the city. These are just a few that I know from the top of my head," Haroon Khalid, the Pakistani author of "Imagining Lahore", told PTI in an email conversation.

According to Altaf Hussain Para, the Srinagar-based author of “The Making of Modern Kashmir”, the “anger” has its roots in the emergence of a new cult of "muscular nationalism" being seen in India for the last few years.

"...Expression of anger through street justice against Pakistan backed terror is dangerous," he said.

Khalid, who denied any recent incidents of backlashes in Pakistan over "Indian names", said the Pakistani state is now "increasingly conscious of its soft image".

Giving his perspective, Hashmi was also clear that he is no fan of the Pakistani state and their way of doing things.

"The mobs there (in Pakistan) are doing their work, their focus is not on the names right now, they might shift to this tomorrow and these fellows (mobs in India) might shift to some other agenda.”