BJP's IT cell chief Amit Malviya said ‘anarchists behind these protests in the name of farmers need to be exposed’. 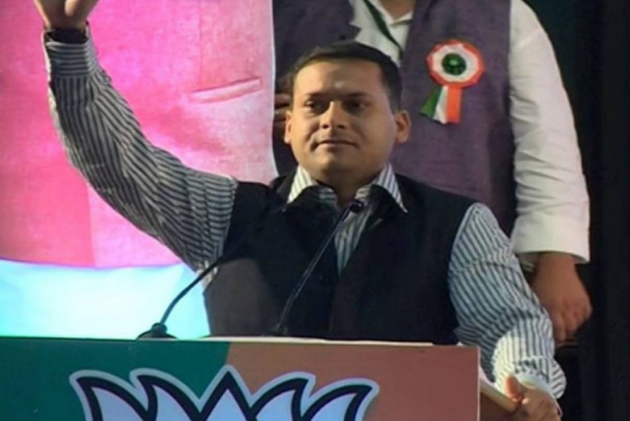 Following the lynching of a man at a farmers protest site near Delhi-Haryana border, BJP on Saturday said the “anarchists” in the name of farmers behind the protests need to be exposed.

Reacting to the incident, BJP's IT cell chief Amit Malviya said: "had Rakesh Tikait not justified lynching in Lakhimpur Kheri, with Yogendra Yadav sitting next to him maintaining sanctimonious silence, the gory murder of a man at Kundli border would not have happened".

"Anarchists behind these protests in the name of farmers need to be exposed," he said.

BJP MP Subramanian Swamy demanded that the incident be probed by the government and a report be made public in a week.

"The Singhu border horrible decapitation and hanging of Lakhveer needs to be probed by the government and a report made public in a week," he said.

A man was lynched, his hand chopped off and the body bearing over 10 wounds caused by sharp-edged weapons tied to a barricade at a farmers' protest site at Kundli, a gruesome incident being blamed on a group of Nihangs.

While, the Congress said it was the government's responsibility to investigate the lynching of a man.

Hours after the macabre crime, a man wearing the blue robes of the Sikhs' Nihang order appeared before the media, claiming that he had "punished" the victim for "desecrating" a Sikh holy book.

Asserting that there is no place for violence anywhere, the Congress said it is the government's responsibility to investigate the incident and that the law should take its course.

Asked about the incident, Congress spokesperson Pawan Khera said, "We saw it on social media, don't know the details yet. There is no place at all whatsoever for violence anywhere in the country."

"This country is and must be governed by the rule of law. It is the government's responsibility to get deep into this, investigate and let the law take its course," he said in response to a question at the All India Congress Committee (AICC) headquarters here.

Another Congress leader Salman Anees Soz said the "gruesome murder" at the Singhu border, between Delhi-Haryana, is shocking and condemnable.

"Hope the perpetrators are quickly brought to justice. But there will now be an attempt to paint all protesters as killers. Just watch how low government supporters will go," he said in a tweet.

Congress spokesperson and senior leader Abhishek Manu Singhvi said that he was expecting BJP leadership and IT Cell to question the opposition about how all's not well at the Singhu border and then "go back to promoting the party and photoshopping images".

Another Congress spokesperson Jaiveer Shergill said the "horrifying murder and hanging of the body at Singhu border is shameful, gruesome and a spine chilling act".

"The matter should be thoroughly investigated, individual(s) responsible should be identified and be awarded strictest punishment," he said.

In a statement, the Samyukta Kisan Morcha said it wanted to make it clear that "both the parties to the incident", the Nihang group and the victim, have no relation with the Morcha.

The peaceful and democratic movement of the farmers is opposed to violence in any form, it added.

The SKM said it is against the desecration of any religious text or symbol but that does not give anyone the right to take the law into their own hands.

Akali Dal leader Manjinder Singh Sirsa said those who believe in humanity can never justify what happened at the Singhu border.

"Violence is condemnable and appalling. I am personally very pained by it," he tweeted.

Shiv Sena leader Priyanka Chaturvedi also tweeted on the incident, saying, "What a sad and condemnable turn of events, fight for justice cannot become means to violence and deaths. This is shameful and the guilty need to be punished. Shameful."

Former diplomat K C Singh also condemned the "gruesome murder" at Singhu and asserted that no crime justifies acts one associates with ISIS/Al Qaeda or vigilantism in Pakistan.

The deceased, Lakhbir Singh, was stated to be a labourer from Punjab's Tarn Taran and was aged around 35 years, police said, adding that the body was found tied to a metal barricade near a stage put up by the farmers protesting against three agriculture laws of the Centre at the site for over 10 months. (With PTI inputs)