The Congress leader is on life support at Guwahati Medical College Hospital after suffering from post-Covid complications. 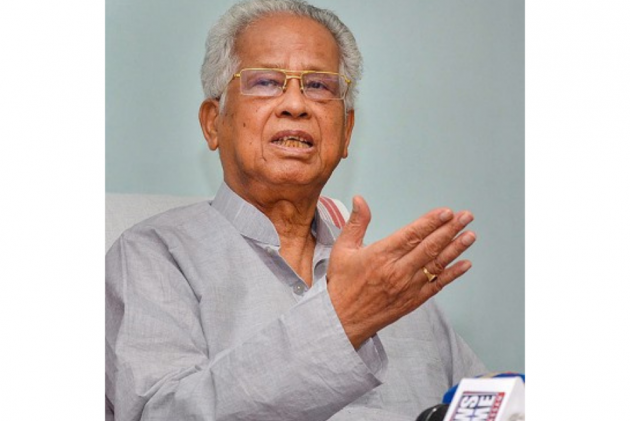 The octogenarian Congress leader, undergoing treatment at the Gauhati Medical College Hospital for post-Covid complications, is being monitored by a team of nine doctors, GMCH Superintendent Abhijit Sarma said.

"The present status of Sir (Gogoi) is very very critical and the doctors are doing their best," he told reporters.

"The former CM's condition is extremely critical and worrisome. He is completely on life support and though doctors are trying, now God's blessings and peoples' prayers are required to improve his current condition," Health Minister Himanta Biswa Sarma, who is at GMCH along with Gogoi's son Gaurav, said.

Sarma said Gogoi's organs have failed with the brain receiving some signals, eyes are showing some reflexes and his heart is functioning as a pace-maker is fitted, but no other organs are functioning.

Gogoi, who was on dialysis on Sunday for six hours, is again flushed with toxins and he is not in a position to undergo the process again, the minister said.

Chief Minister Sarbananda Sonowal said he has directed the health department to provide every possible treatment to him, and "I pray to God for his speedy recovery".

The doctors attending on Gogoi is in constant touch with a team from the All India Institute of Medical Sciences (AIIMS), led by Randip Guleria.

Gogoi was put on ventilation after suffering a multi-organ failure.

The 84-year-old three-time chief minister was admitted to GMCH on November 2. He was put under invasive ventilation on Saturday night when his condition worsened.

On October 25, Gogoi, who was undergoing treatment for Covid-19 and other post-recovery complications, was discharged from GMCH after two months.

He had tested positive for Covid-19 on August 25 and admitted to the GMCH the next day.