This Birthday, That Birthday ... A Tale Of Lalu Yadav’s Fluctuating Fortunes 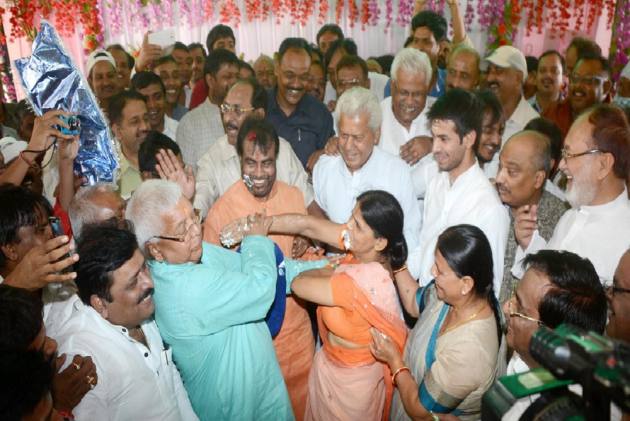 It’s a tale of two birthdays, and of fluctuating fortunes of a leader who once ruled the roost in Bihar.

Rashtriya Janata Dal (RJD) president Lalu Prasad Yadav turned 74 on June 11, but there is no beeline of followers at his 10, Circular Road to celebrate the occasion in Patna. The party has, of course, planned to commemorate the day as ‘Sadbhavna Diwas (harmony day)’ at the party headquarters without any fanfare.

His supporters have put up some posters, planned blood donation camps and also planted saplings at some places in the state but it is unlike any of the birthdays that the maverick strongman of Bihar celebrated when he held sway in the state politics.

Lalu himself is away in Delhi, recuperating since he was discharged from AIIMS, Delhi after being released on bail earlier this year. Convicted in multiple cases in the fodder scam, the former Railway minister had been serving time for more than three years on the trot before being released.

Late last night, he cut a cake at the house of his eldest daughter and Rajya Sabha Member Misa Bharti in the presence of his wife, Rabri Devi and other family members in Delhi. It was a quiet family affair, nothing like the yesteryear celebrations that his boisterous supporters hosted in his presence on his every birthday.

Beating drums, they would bring a green-colured, jumbo-sized cake, invariably in the shape of a hurricane lantern (laalten in Bihari, if you please!) to his bungalow to celebrate it with as much pomp and show as possible every year. Folk dancers would also be invited to sway to the beats of catchy panegyrics composed in his honour by the local Bhojpuri bards. Everybody would hail the ‘birthday boy’ as the messiah of the poor, an inveterate champion of social justice, who gave voice to the voiceless in Bihar, even as hundreds of people trickled into his bungalow just to wish him all through the day.

Lalu did not mind such adulation at all. As he did during the Holi festivities, he would happily keep the gates of his bungalow open for all and sundry, though he himself admitted year after year that June 11 was not his real birthday. “It is my birthday, as per my certificate, not the real one,” he would say. I still do not know my exact birthday. All I can say that the Britishers had left the country before I was born. My party workers have been celebrating the day since it happens to be my birthday on my school certificate. I do it all in deference to their wishes.”

However, the sheen of his birthday celebrations has since worn off considerably. In 2017, he was sent to prison in Ranchi. Since then, he has been battling against multiple health issues and has remained confined to the patient’s ward of Rajendra Institute of Medical Sciences in the Jharkhand capital, and later at AIIMS, Delhi.

The last big bash on his birthday at his Patna bungalow actually took place on his 68th birthday after he forged an alliance with Chief minister Nitish Kumar against BJP ahead of the 2015 assembly elections. Together, they won the elections but parted ways in 2017.

His supporters, however, remain hopeful that Lalu would regain his health soon and return to Bihar shortly to guide his party, which had given a tough fight to the Nitish Kumar-led alliance in 2020 state assembly polls under the leadership of his son, Tejashwi Prasad Yadav. They also hope that Lalu’s birthday would continue to be celebrated by the secular forces just the way it used to be done in the past in his presence.