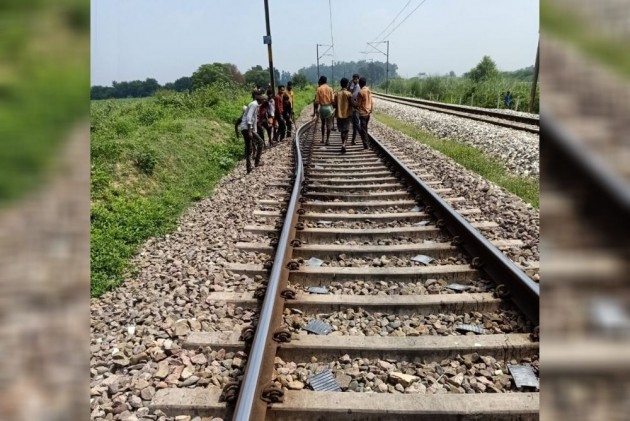 Railway staff travelling in a parcel train, running between Amritsar and Guwahati, had a narrow escape recently. Unaware of ongoing track repair work, the parcel train had a close shave as the loco pilot (driver) had to apply the emergency break just 10 meters before the repair site. The train crew did not receive any prior information. The incident took place between Kesari and Barara railway stations in Haryana. According to sources, engineering staff were working on the track without having cautioning the loco pilot or putting any display board along the track near the site.

“The train was stopped by applying the emergency break just 10 meters before the site. The pandoral fast clip--the clip that fastens the rail to the concrete slab was opened and had the train crossed the track, it would have derailed,” a source from the track repair site informed.
A driver, an assistant driver and a chief loco inspector were present in the train's cabin.

This incident is just one among many such incidents and accidents that have occurred in the past few years. For instance, in August 2017, Puri-Haridwar Utkal Express had derailed in Khatauli in Uttar Pradesh's Muzaffarnagar district due to a communication gap between officials undertaking track repair. The accident left over 20 dead and 100 injured.

The Indian Railway has issued Standard Operating Procedures (SOPs) to repair tracks in various situations such as emergency repairs, temporary repairs and permanent repairs. For each type of repair, there is a set protocol which includes delivering prior information to the train crew. Since the start of the Covid-19 pandemic, the Indian Railways has introduced over 100 parcel trains across the country on various routes for transportation of essential items.

Speaking to Outlook, Deepak Kumar, Chief Public Relation Officer, Northern Railway, has said that "necessary action is being taken," to avoid such incidents in the future.