Amid all the political drama that has been going on in Rajasthan between Ashok Gehlot and Sachin Pilot camps, BJP has remained silent and not made any move to benefit from the crisis. 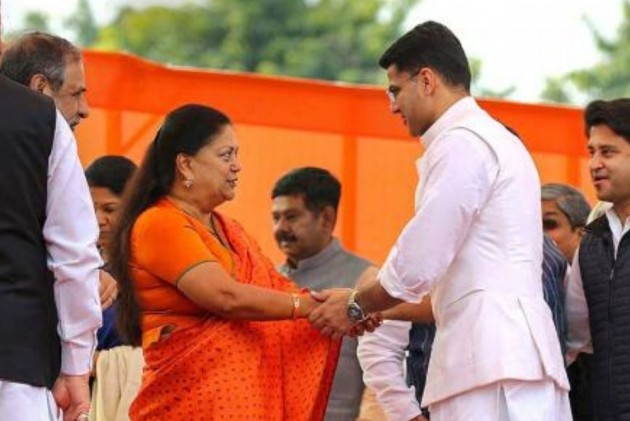 Unlike in Karnataka and Madhya Pradesh, where the BJP came to power after toppling incumbent Congress governments with the help of rebel legislators, the saffron party has not made any move in Rajasthan yet, despite an open rebellion by former Rajasthan Deputy Chief Minister Sachin Pilot and 18 of his loyalist MLAs.

BJP's wait and watch approach stems from two factors: lack of numbers to topple the government; and conspicuous silence of former chief minister and BJP's most prominent leader in Rajasthan, Vasundhara Raje, over the entire political crisis.

BJP leaders are closely following the developments in the state but have not made any move yet. A senior BJP leader told Outlook, "So far, Pilot only has support of only 18 MLAs and it is insufficient to bring down the present government. But one never knows; he may get more support as there are many MLAs in Ashok Gehlot camp who are silent and could become turncoats."

Even after the rebellion, Congress claims to have the support of 109 MLAs. However, a closer look at the numbers suggests that without the 19 rebel legislators, including Pilot, the ruling government has the support of around 103 MLAs -- 88 Congress, 1 RLD, 10 Independents, 2 BTP and 2 CPI (M) MLAs -- in the Assembly.

In a possible scenario, wherein the rebel MLAs are allowed to take part in a floor test, and they cast their vote against the Congress government, then the collective support of anti-Congress votes will stand at 97 MLAs (72 BJP + 19 Congress Rebels + 03 RLP + 03 independent MLAs), assuming that the three independents who are being investigated by Anti-corruption Bureau vote against the Gehlot government.

At present, in the House of 200 MLAs in the State Assembly, including the 19 rebel legislators, the Congress has 107 MLAs -- six of them are originally from Mayawati's Bahujan Samaj Party and changed camp last year. It also has the support of at least a dozen independent MLAs. Whereas, BJP has 72 of its own MLAs and the support of three Rashtriya Loktantrik Party MLAs.

According to BJP insiders, an informal meeting was held at the BJP state president Satish Poonia's house on Thursday afternoon. It was attended by Gulab Chanda Kataria, leader of opposition, Rajendra Rathore, deputy leader of opposition, and former Social Justice Minister Arun Chatturvedi. "It was an informal meeting called to discuss the state of affairs in Rajasthan. It was decided that BJP will wait for some time and then decide our next move," a senior BJP leader told Outlook.

Despite the speculations of Sachin Pilot joining the BJP, no political leader in the saffron party has officially confirmed this or asked him to become part of the saffron party. In fact, Pilot has told media that he will not join the BJP and termed such speculations 'an attempt to tarnish his image'.

However, in the last one week, Union Minister Gajendra Singh Shekhawat, Rajasthan BJP chief Satish Poonia, Om Mathur and several other BJP leaders, without naming Pilot in their statements, have said that "a leader with mass support is most welcome in the party."

Former chief minister Vasundhara Raje, who is presently in her Dholpur residence, is yet to comment on the political crisis in Rajasthan. She also skipped the informal BJP meeting held Thursday.

Sources in BJP tell Outlook the 67-year-old BJP leader is upset with the alleged proximity of Pilot with the BJP.

"Raje is eyeing the third term as chief minister of Rajasthan. Already, attempts were made to sideline her after BJP lost in assembly polls in 2018 in the state. The latest political crisis has made her more upset as she can see a potential replacement of her in Pilot if he joins the party. But even now she has the support of at least 30 MLAs who will stand with her," a senior BJP leader told Outlook on the condition of anonymity.

Also Read: Notice Sent By Police Had Upset Sachin Pilot, Made Him Head To Delhi

BJP sources say that the process of sidelining Raje by the central leadership had started back in 2018, right after the BJP lost in the assembly polls and its seat share crashed from 163 to 73. This also became evident when the party chose Satish Poonia as its state president. Poonia, a long-time dedicated BJP leader with roots in the ABVP and RSS, was sidelined by Raje in her last tenure. A few months later, Om Birla, MP from Kota and a known Raje detractor, was chosen for the important post of Lok Sabha speaker.

This was in sharp contrast to early 2018, when Raje staunchly opposed the appointment of Union Minister Gajendra Singh as the party's state president who was the central leadership's choice for the post and also managed to get her way.

BJP leaders say that the party is wary of any possibility of Raje publicly opposing joining hands with Pilot or convincing MLAs loyal to her to not support the party's move if Pilot allies with the party.

Meanwhile, Rashtriya Loktantrik Party leader Hanuman Beniwal wrote on Twitter on Thursday that Raje called up Congress MLAs close to her and asked them to support Ashok Gehlot and keep a distance from Sachin Pilot.

"She called every Jat MLA in Sikar and Nagaur and asked them to maintain distance from Sachin Pilot. We have proof of this," Beniwal wrote on Twitter.