US Will Soon Have Trade Deal With India: Trump Assures PM Modi After Meeting

The two countries are negotiating a trade package to iron out issues and promote two-way commerce. 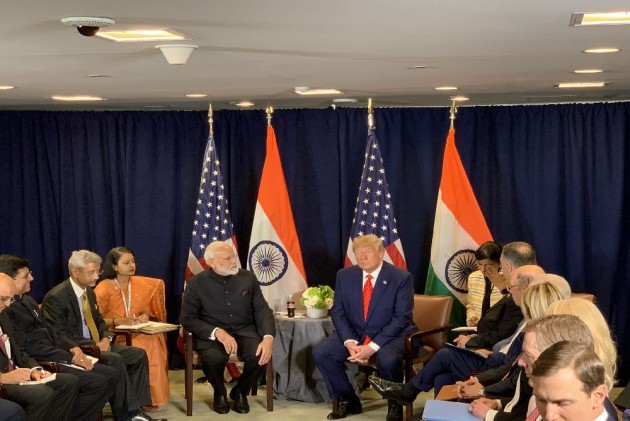 US President Donald Trump has said his country will soon have a trade deal with India to boost economic ties between the two nations.

"I think very soon. We are doing very well. (US Trade Representative) Robert Lighthizer who is right here negotiating with India ... I think, very soon we will have a trade deal," Trump told reporters here when asked if there is any trade deal is expected in the talks between India and the US.

Prime Minister Narendra Modi met Donald Trump on the sidelines of the UN General Assembly session and discussed with him bilateral ties.

The two countries are negotiating a trade package to iron out issues and promote two-way commerce.

The US has been pressuring India to lower duties on its products and address the trade gap.

Speaking at the press conference, Modi said: "As far as trade is concerned, I am very happy that in Houston, in my presence there was an agreement signed by Indian company Petronet for $2.5 billion, which is the amount of investment the Indian company is going to do in the energy sector and this will mean that in the years to come, this will result in trade of an amount of $60 billion and create 50,000 jobs which I think is a big initiative taken by India."

The Petronet deal, the largest by an Indian company in US LNG, came after Modi had a meeting with the CEOs of top US-based oil companies on Saturday last week.

India is demanding exemption from high duties imposed by the US on certain steel and aluminium products, resumption of export benefits to certain domestic products under their Generalised System of Preferences (GSP), greater market access for its products from sectors, including agriculture, automobile, auto components and engineering.

On the other hand, the US wants greater market access for its farm and manufacturing products, dairy items and medical devices, and cut on import duties on some ICT products. The US has also raised concerns over high trade deficit with India.