After shaking a leg with students, new Punjab CM Charanjit Singh Channi went viral on Sunday for stopping his car to wish a newly wed couple in Bathinda. 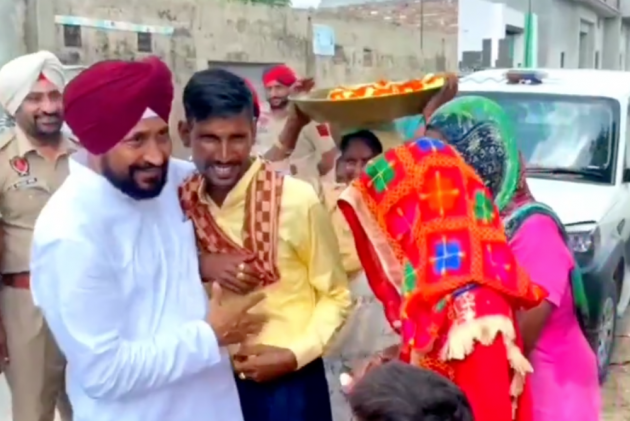 Punjab Chief Minister Charanjit Singh Channi earned much love on social media on Sunday after a video of him stopping his vehicle to wish a newly married couple went viral. The incident happened in Bathinda, Punjab when the CM was visiting.

The Punjab government's Twitter handle posted a video of the incident and tweeted, "During his visit to Bathinda today, Chief Minister @CHARANJITCHANNI spotted a newly married couple at village Mandi Kalan and suddenly stopped his vehicle to convey his best wishes."

During his visit to Bathinda today, Chief Minister @CHARANJITCHANNI spotted a newly married couple at village Mandi Kalan and suddenly stopped his vehicle to convey his best wishes. pic.twitter.com/kws6XBAZGf

The video shows the chief minister, who was on a tour of the cotton belt in Bathinda district, hugging the man and also giving 'shagun' to his wife after alighting from his vehicle.

With several police personnel surrounding him, he is also seen tasting some sweet dish carried in a 'parat' (platter) by the family.

Channi is then seen asking when did they got married and a woman from the family replying that their marriage took place on Saturday.

In the video, he is seen conveying his best wishes with folded hands.

A few days back, Channi had performed Punjab's folk dance 'Bhangra' with students at an event in Kapurthala.

He, along with his deputy Sukhjinder Singh Randhawa, undertook a whirlwind tour of the cotton belt in the Malwa region of the state to assess the loss because of pink bollworm pest.