‘We Did It, We Did It,’ Nepali Sherpas Scale ‘Savage Mountain’ K2 In Winter For First Time

‘We did it, believe me we did it,’ expedition’s team leader Chhang Dawa wrote on Facebook, ‘The Karakorum's Savage Mountain been summited in most dangerous season: winter.’ 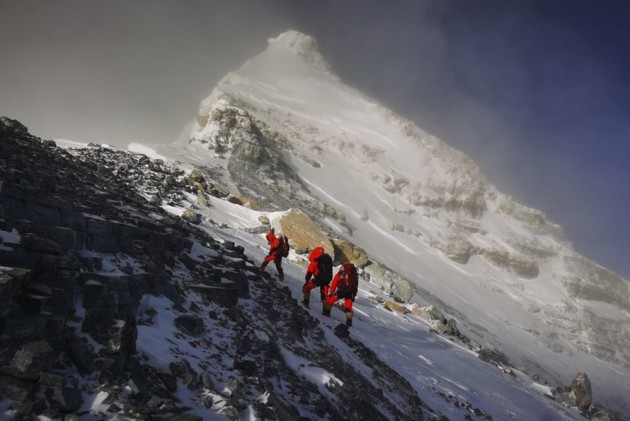 A group of 10 Nepali Sherpas, part of three different expeditions, became the first to scale Mount K2, the world’s second-highest and perhaps the deadliest peak, in winter.

Of the world’s 14 peaks taller than 8,000 metres, K2 had been the only one had could never be scaled in winter, mostly because of hostile weather, with extreme cold, high wind and low barometric pressure.

On Saturday evening, Chhang Dawa Sherpa, the team leader of the expedition organised by the Nepal-based Seven Summits Treks (SST), announced on Facebook that the summit of K2 (8,611 metres) had been scaled at 5 pm local time.

Call Of The Black Pyramid

“We did it, believe me, we did it,” Chhang Dawa wrote, “The Karakorum's 'Savage Mountain' been summited in most dangerous season: winter.”

Part of the Karakoram Range, K2 is located in Pak-Occupied Kashmir.

“The impossible is made possible!  #K2winter - History made for mankind, History made for Nepal! At 17:00 hrs local time @nimsdai and team summited K2, teaming up with Mingma G and team and a member from SST, Sona Sherpa,” mountaineering legend Nirmal ‘Nims’ Purja wrote on social media on Saturday evening.

“A very special moment. The whole team waited 10 metres below the summit to form a group then stepped onto the summit together whilst singing our Nepalese National Anthem. We are proud to have been a part of history for humankind and to show that collaboration, teamwork and a positive mental attitude can push limits to what we feel might be possible,” Purja wrote.

However, since the summit time was evening, there remains apprehensions among the global mountaineering community about their safe descend from the peak, as the mountain has a history of successful summiteers perishing while descending. The steepness of the terrain, loose rocks and unpredictable weather makes K2 dangerous climb.

“It’s K2 and it’s winter, still many uncertain things may occur, we never know. Hope everyone descends to the base camp safely,” Chhang Dawa wrote. He was coordinating from the base camp.

“Finally we did it. We made the history in mountaineering field,” Mingma G’s update on Facebook said.

This year, four separate expeditions comprising more than 60 climbers targeted a winter climb of K2, which has remained an elusive success despite repeated attempts since 1987. Of these four teams, two was all-Sherpa teams and one was a major international expedition comprising Western climbers and Nepali Sherpas.

A 10-member team from all these expeditions started for the summit from Camp IV at 1 am on Saturday and reached near the top by afternoon.

Over the past few days, the two all-Sherpa-member teams were working in tandem with the Sherpas of the SST expedition due to the hostile weather, which had already left a good number of their climbing gears damaged.

Usually, in every climbing season, Sherpas first climb up to set up tents at the high altitude camps and fix ropes for future climbers. In end-December, all the rope fixing teams had to return after setting up the camps I, II and III due to bad weather.

Earlier this week, after week-long hostility of the weather, clear weather gave an opportunity to the Sherpas to climb for fixing ropes for the rest of the distance and set up the highest camp, called Camp IV.

On Friday evening, Purja wrote on social media, the combined effort from the teams made some remarkable progress this afternoon. “As per the mega plan, big well done to our team lead by Mingma G with Mingma David Sherpa, Mingma Tenzi Sherpa and Sona Sherpa (SST) for successfully fixing lines up to Camp 4 at 7800m, The Highest Altitude Ever Gained at K2 in Winter! Later today, I will be leading the fixing team to the summit. We hope to stand on the summit together.”

On Saturday afternoon, some of these 10 Sherpas had reached near the top but instead of reaching the summit, they waited 10 metres below it, waiting for the others so that they could make it to the summit together.

The term Sherpa has traditionally been used to describe the high-altitude porters who assist Western mountaineers during their climb. Over the past two decades, however, many of these Sherpas had emerged as more of ace mountaineering guides than mere porters.

Of the four expeditions this year, the teams led by Mingma G and Nirmal Purja decided not to take any “clients” and achieve this feat to create a history of behalf of the Sherpa community.

The SST team has many globally renowned climbers who are still at the base camp and will attempt the climb in the coming days.

The fourth team is of Icelander John Snorri, who is being supported by Pakistani mountaineering guides Muhammad Ali Sadpara and his son, Sajid. They too are expected to attempt for the summit later this month.