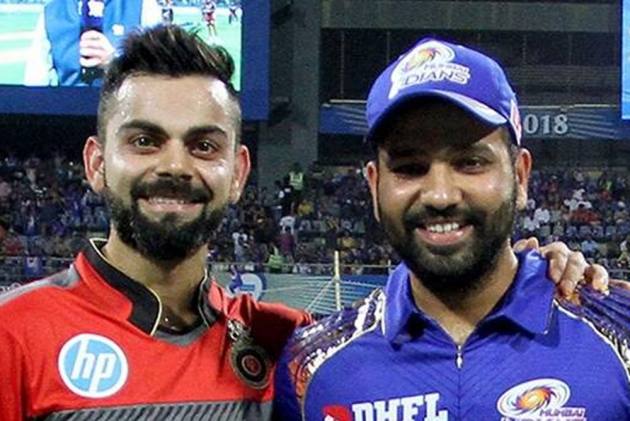 Virat Kohli and Rohit Sharma will be aiming to up their captaincy quotient and raise their respective team's performance by a few notches when Royal Challengers Bangalore lock horns with defending champions Mumbai Indians in an IPL game, in Dubai on Sunday.

India's outgoing T20 captain and the one who will replace him, both have endured crushing defeats. It puts them on a slippery slope as the tournament approaches its business end.

The fact that bulk of India's top-order batters, who are currently under-performing, are from these two sides, sticks out like sore thumb.

Going into the World T20, Kohli, Rohit, Suryakumar Yadav and Ishan Kishan are some of the batting mainstays.

Also there is Hardik Pandya, who is not being picked by Mumbai Indians as he is perhaps not 100 percent fit to carry his all-round duties which includes four overs of brisk fast-medium bowling.

But if Hardik is batting fit and still the burly and bordering on sloppy Saurabh Tiwary is preferred, then it does seem a bit baffling as the Baroda all-rounder purely as a batsman is miles ahead of the Jharkhand man.

Kohli showed some form en route his half-century against CSK at Sharjah but the overall form has been scratchy and his MI counterpart also didn't completely look in his elements during the previous game against KKR.

The more worrying factor will be Surya's lack of form which might be a result of lack of game time, having sat through two Tests in England. He is suddenly looking a lot rustier than usual.

It was no different for Ishan also as the trio needs to fire to be in good head space before the T20 World Cup on same tracks that are expected to get slower.

One can only hope that their form doesn't desert them when they need it most in the "Desert Nation".

Interestingly, both RCB and MI have lost their two matches on resumption to same opposition --- KKR and CSK.

What's more disconcerting has been the patchy bowling efforts from both sides save an odd bowler.

For Mumbai, it is Jasprit Bumrah, who has looked head and shoulders above the rest of the pack while Yuzvendra Chahal with wiry little frame is carrying the burden of an entire below-par bowling attack.

No support for either of the two from the other bowlers have not helped their cause either.

RCB's case is a bit trickier as they have now lost seven matches on the trot in the UAE. Five of those defeats came in the last edition.

RCB's bowling attack, in terms of quality, is a bit wafer-thin as the likes of Harshal Patel don't have the wherewithal to perform match after match.

In case of Navdeep Saini, a success-rate of just about "half wicket per IPL game" (17 scalps in 30 matches) gives a picture of why Kohli can't always rely on him.

Wanindu Hasaranga was taken after just two good matches against a second string Indian side in Sri Lanka and even if one goes by his ICC rankings, there are enough quality players who would see his spell through.

In batting, it's more about Kohli and Devdutt Padikkal who put on 111 for the first wicket only to find that others weren't good enough to add even 50 runs.

They have a keeper in Kona Bharath, who is primarily a red-ball specialist. Against the CSK, Harshal Patel, who had some sporadic experiences of batting for Haryana, was sent ahead of him.

That only speaks of skipper's lack of trust having sent him up the order.

Glenn Maxwell as usual is the "big buy" which more often than not goes waste and Tim David not being the man for slow tracks is also hurting RCB chances.