After restricting Australia to 152/5, India chased down the target in just 17.5 overs in Dubai. Catch highlights of IND vs AUS, warm-up match here. 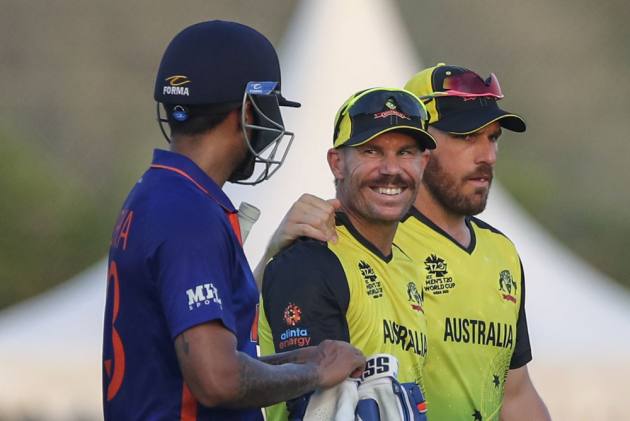 India produced a clinical performance on Wednesday in Dubai, UAE to hammer fellow title favourites Australia by eight wickets in their final warm-up match ahead of the ICC Men's T20 World Cup 2021. Chasing a target of 153 runs, openers KL Rahul (39 off 31) and Rohit Sharma (60 off 41) laid the perfect foundation with a 68-run stand in 9.2 overs, then Suryakumar Yadav (38 off 27) and Hardik Pandya (14 off 8) gave the finishing touches. Ashton Agar took the lone wicket, that of Rahul, while captain Rohit retired to give Pandya some time in the middle. The all-rounder was more than grateful, and he showed it with a six to finish off the chase. Earlier, a buoyant India let Rohit lead the side. Aussie skipper Aaron Finch won the toss and opted to bat first only to see Ravichandran Ashwin produce a magical spell to send both David Warner and Mitchell Marsh back in the second over. Ravindra Jadeja made it 11/3 with the wicket of Finch. Then Steven Smith and Glenn Maxwell revived the Aussie innings with knocks of 57 and 37 runs respectively even as Rohit utilised Virat Kohli as one of the seven bowlers. Marcus Stoinis gave Australia a big finish with 41 off 25. India need 153 to make it two in two in the warm-ups. Catch highlights and cricket scores of IND vs AUS, warm-up match here.

Hardik Pandya hits Kane Richardson for a six off the fifth ball and it's over. India win by nine wickets. A thrashing. And a perfect warm-up campaign for India.

Pat Cummins with his final over. Hardik Pandya hits the first ball for a four, to deep mid-wicket boundary. Australi's premier pacer finishes wicketless. Five from the over and his figures: 0/33. India need 14 in 18. IND - 139/1 (17)

Kane Richardson gets his first over. KL Rahul hits the second ball for a four. Six from the over. In the previous over, Adam Zampa conceded seven. IND - 36/0 (6)

Pat Cummins shares the new ball with Mitchell Starc. Rohit Sharma hits back-to-back fours to end the second over. 10 from it. IND - 17/0 (2)

Mitchell Starc with the first over. KL Rahul takes first strike. A dot, then a wide. A double to square leg. Three dots then a four to third man. Seven from the over. Rohit Sharma is Rahul's opening partner.

Bhuvneshwar Kumar with the final over. He removes Steve Smith (57 off 48), caught by Rohit Sharma at extra cover off the fifth ball. New man Matthew Wade hits the last ball for a four. Six from the over. India concede 58 runs in the last five. AUS - 152/5 (20)

Another big over. Varun Chakaravarthy concedes 15 in the penultimate over. Marcus Stoinis hits the first for a four, then a six off the second. AUS - 146/4 (19)

Bhuvneshwar Kumar returns for his third over. 13 from it as Marcus Stoinis and Steve Smith hit fours off the second and fifth balls respectively. 29 runs in the last two overs with Shardul Thakur leaking 16 from his third. AUS - 131/4 (18)

Second over for Shardul Thakur. Steven Smith hits the fourth ball for a four, through cover. Eight from the over. 37 runs in the last five overs. AUS - 94/4 (15)

Virat Kohli returns for his second over. Marcus Stoinis hits the fourth ball for a four, to deep mid-wicket boundary. Eight from the over. AUS - 81/4 (13)

Rahul Chahar on with third over. Glenn Maxwell hits the first ball for a four, over backward point fielder. Chahar responds with three dots, then the wicket. Bowled. Maxwell goes for 37 off 28. Marcus Stoinis is the new man. AUS - 72/4 (11.5)

A steady stand for Australia as Steven Smith (22 off 24) and Glenn Maxwell (23 off 18) add 46 runs in 41 balls for the fourth wicket. 37 runs in the last five overs. Rahul Chahar leaks eight runs in his second over.

Another tidy over as Rahul Chahar concedes four singles from his first over. AUS - 42/3 (8)

Virat Kohli gets an over. Singles off the last four balls.

Ravindra Jadeja on with his second over. Glenn Maxwell hits the first two balls for fours, then a three. Three singles to finish the over. 14 from it. AUS - 34/3 (6)

And glimpses of mentor MS Dhoni working with Rishabh Pant as groundsmen adjust sightscreen in Dubai.

Ravichandran Ashwin on with the second over. A dot to Aaron Finch, then three singles. And the wicket. Ashwin traps David Warner (1 off 7) in front. Mitchell Marsh joins Finch in the middle. And it's two in two. Marsh goes for a first-ball duck, caught by Rohit Sharma. Steve Smith is the new man for Australia. AUS - 6/2 (2).

Bhuvneshwar Kumar with the first over. David Warner takes the first strike. Three dots, then two wides. Aaron Finch. takes a single off the fourth. Three from the over.

Australia win the toss and will bat first against India. Rohit Sharma is leading India today.