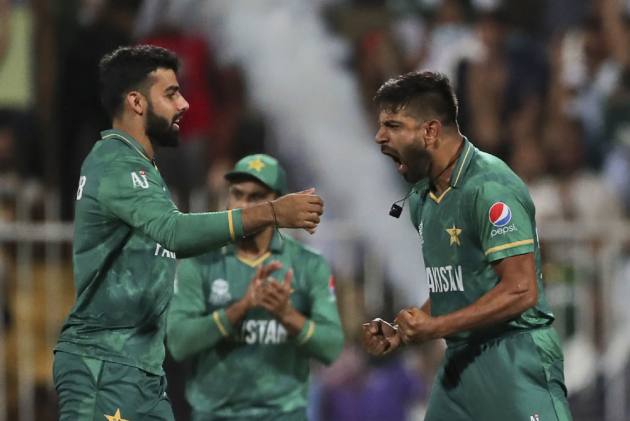 India on Sunday, New Zealand on Tuesday. Pakistan are now the favourites. Two days after breaking the World Cup jinx against arch-rivals India, Babar Azam & Co registered another comprehensive win, by five wickets, in their second ICC Men's T20 World Cup 2021, Super 12 match. With two wins in two outings, Pakistan now sit at the top of Group 2 table with four points (net run rate +0.738). Azam won the toss, and opted to bowl first again. Haris Rauf took four wickets to help Pakistan restrict the Kiwis to 134/8 with none of the batters reaching 30. Then Mohammad Rizwan hit 33 off 34 even as New Zealand keep the fight alive with wickets in tensed middle overs. Then veteran Shoaib Malik (26 off 20) and flamboyant Asif Ali (27 off 12) stitched an unbeaten 48-run stand in 23 balls for the sixth wicket to take the 2009 champions home in Sharjah, UAE. Next, Pakistan face Afghanistan on October 29 and New Zealand take on India on October 31. Catch highlights and cricket scores of PAK vs NZ, ICC T20 World Cup 2021 match here:

Trent Boult with the penultimate over. A single as Shoaib Malik plays it to square leg. Physio is back again, and having a talk with Asif Ali. The batter was hit on the grill by a Tim Southee bouncer a while ago. Pakistan need 8 runs in 11 balls.

Tim Southee on with his last over. A dot, then Asif Ali hits the second ball for a six, over long off, then another, this time of long on. A shout for LBW. Not given, but Kiwis take the review. Missing middle stump bail. A dot, then a bouncer. Deflects into the grill. Concussion test for Ali. 1/25 for Southee. 13 from the over. Pakistan need 24 runs in 18 balls. PAK - 111/5 (17)

Trent Boult returns for his third. A single off the second as Shoaib Malik plays it to third man. A dot, then Imad Wasim hits the fourth for a four through extra cover. And LBW. No review. Wasim goes for 11 off 12. Pakistan need 48 runs in 31 balls. PAK - 87/5 (14.5)

Mitchell Santner continues. Five singles, and the wicket of Mohammad Hafeez (11 off 6), courtesy of a superb catch by Devon Conway at long-off. Conway dives to his left and pulls off a crazy, single-handed catch. Pakistan need 72 runs in 54 balls. Shoaib Malik is the new man. PAK - 63/3 (11)

James Neesham returns for his second. A dot, then a single. Mohammad Hafeez lofts the third over sweeper cover for a six. 11 from the over. Pakistan need 77 runs in 60 balls. PAK - 58/2 (10)

Ish Sodhi on. Two dots, the Fakhar Zaman hits the third for a six over mid-wicket boundary. Two singles, and the wicket. Zaman is trapped in front. New Zealand take the review and it's hitting middle. Zaman goes for 11 off 17. Next man for Pakistan is Mohammad Hafeez. PAK 47/2 (9)

Mitchell Santner returns for his second over. A dot then Mohammad Rizwan sweeps, and a four to fine leg boundary. Six runs from the over. PAK - 36/1 (7)

Fakhar Zaman joins Mohammad Rizwan in the middle. A single to open his account, the another single as the Pakistani duo rotates the strike. A dot. Another. And another. Two runs and a wicket in the over. PAK - 30/1 (6)

Trent Boult continues. Mohammad Rizwan hits the first ball for a four, to third man. Delicate touch. Two dots, then a single. A dot to Babar Azam, then a single to mid-off. Six from the over. PAK - 28/0 (5)

Tim Southee continues. A dot, then a single as Babar Azam plays it to deep. A dot, then a four to fine leg. Mohammad Rizwan connects his pull shot. A single to fine leg, again. A double to mid-wicket to end the over. Eight from it. PAK - 22/0 (4)

Bowling change. Trent Boult on. Mohammad Rizwan pulls the first ball for a four, to mid-wicket boundary. But only five from the over. PAK - 14/0 (3)

Mitchell Santner with the new ball. A dot, then a single as Mohammad Rizwan plays the second to long on. A four to mid-wicket boundary as Babar Azam plays a lofted drive. Two more singles and a dot. Seven from the over. Target - 135

Haris Rauf with the final over. New man Ish Sodhi takes a single off the first. A double to mid-off as Mitchell Santner plays a lofted drive. One bye, then a slap to deep point. Santner then finds the gap and four to deep extra cover. Rauf is not happy. And middle stump to end the innings. Santner out for 6 off 5. Rauf's figures: 4/22. 34 runs and four wickets in the last five overs. NZ - 134/8 (20)

Shaheen Afridi with the penultimate over. A dot to Tim Seifert. Then another one, on the toes. Pakistan take a review. Not out. Missing everything, long way off the leg. A wild swing, to deep mid-wicket for a single. Half chance for Hasan Ali. Another shout for LBW, against Mitchell Santner. No review this time. But one leg bye for the Kiwis. Seifert then guides the next ball to fine leg boundary. Som sweep against real pace. And first wicket for Afridi tonight. Seifert (8 off 8), thick edge, and caught by Mohammad Hafeez at backward point. Six from the over. Afridi's figures: 1/21, including a maiden. NZ - 125/7 (19)

Shaheen Afridi returns for his third over. Two singles, then one leg bye to Devon Conway. The singles, then a four to long off by Glenn Phillips. The previous four was off the last ball of the 13th over, by Conway. Nine from the over. NZ - 116/4 (17)

Hasan Ali returns and Kane Williamson (25 off 26) is run out off the first ball. Ali reacts quickly and hits the target even as the Kiwi skipper tries a quick u-turn. Blink and miss dismissal. Glenn Phillips is the new man. NZ - 90/4 (13.1)

Mohammad Hafeez continues. Kane Williamson tries to reverse sweep the third balll, but ends up getting a LBW verdict. But review saves him. Then the Kiwi skipper hits the next for a four, to the mid-wicket boundary. Then a one-handed six, over long on. 12 from the over. NZ - 75/3 (12)

Imad Wasim on with his final over. Daryl Mitchell mishits a six off the first, over long off boundary. Chance for Shaheen Afridi there, but watches it sail over. Another mishit, but this time Fakhar Zaman takes the catch at long on. Mitchell goes for 27 off 20. James Neesham joins Kane Williamson. 54/2 (8.2)

Shadab Khan with his first over. Three from the over, including one leg bye. In the previous over, Imad Wasim conceded three singles. NZ - 48/1 (8)

Hasan Ali gets his first over. And 13 from the over as Daryl Mitchell and Martin Guptill hit a six off the first and four off the last ball respectively. NZ - 34/0 (5)

Shaheen Afridi continues. Daryl Mitchell hits the fifth ball for a four, to mid-off boundary. Eight from the over. NZ - 15/0 (3)

Imad Wasim shares the new ball. Daryl Mitchell takes a single off the second ball, then a dot. Two singles, then Martin Guptill hits a four past point. Seven from the over. In the first over, Shaheen Afridi produced a maiden, to Guptil. NZ - 7/0 (2)

Shaheen Afridi with the new ball. Martin Guptill to take the first strike. His opening partner is Daryl Mitchell.

New Zealand pacer Lockie Ferguson is out of the tournament with a calf injury.

Focus will be on Pakistan's opening pair, Babar Azam and Mohammad Rizwan. They looked peerless against India. For the record, they have three 150+ stands this calendar year.

Haris Rauf with the final over. New man Ish Sodhi takes a single off the first. A double to mid-off as Mitchell Santner plays a lofted drive. One bye, then a slap to deep point. Santner then finds the gap and four to deep extra cover. Rauf is not happy. And middle stump to end the innings. Santner out fot 6 off 5. Rauf's figures: 4/22. 34 runs and four wickets in the last five overs. NZ - 134/8 (20)