Akbar, who resigned as Union minister on October 17, had filed a private criminal defamation complaint in the court against Ramani after his name cropped up on the social media when he was in Nigeria, as the #MeToo campaign raged on in India. 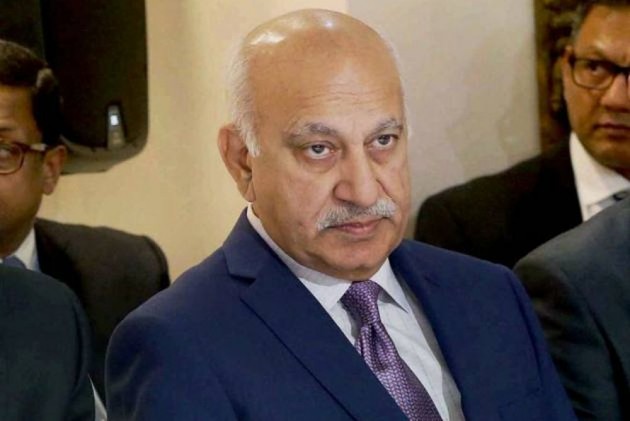 Two witnesses recorded their statements with Delhi court on Friday in support of defamation case filed by journalist and politician M J Akbar against his former woman colleague Priya Ramani who had filed a case against him alleging sexual misconduct.

Akbar's two former colleagues, Sunil Gujral and Veenu Sandal deposed as witnesses before Additional Chief Metropolitan Magistrate Samar Vishal and said the allegations came as a shock to them and irreparable damage was caused to his reputation.

Gujral, a businessman and printer, publisher of the Sunday Guardian, who appeared as a complainant witness to support defamation case filed by Akbar, testified that as a colleague and a friend, he never heard any whisper regarding misconduct or misbehaviour of any kind.

Regarding the allegations levelled by scribe Ramani against Akbar, he said this came as a "shock" to him and he was "very disturbed".

"I spoke to Akbar thereafter as I felt embarrassed and let down. Besides this, my embarrassment was compounded as friends and acquaintances who knew of all my old association with Akbar of almost 40 years started asking embarrassing questions, which made me feel very bad since I felt that irreparable damage has been done to Akbar's reputation in my estimation as well as in estimation of my friend circle and acquaintances," Gujral, who knows Akbar sinch 1979-80, testified.

Akbar, who resigned as Union minister on October 17, had filed a private criminal defamation complaint in the court against Ramani after his name cropped up on the social media when he was in Nigeria, as the #MeToo campaign raged on in India.

Ramani has accused Akbar of sexual misconduct around 20 years ago, which was denied by him.

The other witness, Sandal said she heard in the news about Ramani's tweets on October 8 and it was a "huge jolt" that she had called Akbar a "predator" and other revelations about him.

"It was really distressing that the allegations had been made and that he could do the things that Ramani had alleged... It was very shocking and painful to think that someone you had placed on a pedestal could allegedly fall so low," she deposed.

Sandal, a journalist who said she knows Akbar for over 20 years, added that there was a lot of talk about this at that time and during discussions with friends and at other public places, it was embarrassing to be asked questions about Akbar as people knew of her association with him.

"It was very obvious that not only in my eyes but also in others, his reputation had been dragged through the mud and was in tatters," she said.

The court has posted the matter for further hearing on January 11, when it is likely to record the statement of another witness named by Akbar in his complaint.

The court had earlier recorded the statement of Joyeeta Basu, the editor of Sunday Guardian who strongly defended former Union Minister M.J. Akbar, calling him "a thorough gentleman with an impeccable reputation".

Akbar had earlier told the court in his statement that an "immediate damage" has been caused to him due to the "scurrilous", concocted and false allegations of sexual misconduct levelled against him.

About 19 women journalists who have worked with 'The Asian Age' newspaper, came out in support of their colleague Priya Ramani who has accused Union minister, M J Akbar of sexual harassment, while he was working as a journalist.

Although he had denied the allegations saying, "The allegations of misconduct made against me are false and fabricated, spiced up by innuendo and malice. I could not reply earlier as I was on an official tour abroad."