As Bangladesh Cosies Up To China, New Delhi Looks For Path Correction

Use of issue of illegal influx of Bangladeshi immigrants as an election plank by the ruling dispensation harms ties with a friendly country. It shows little concern for India’s strategic interests. 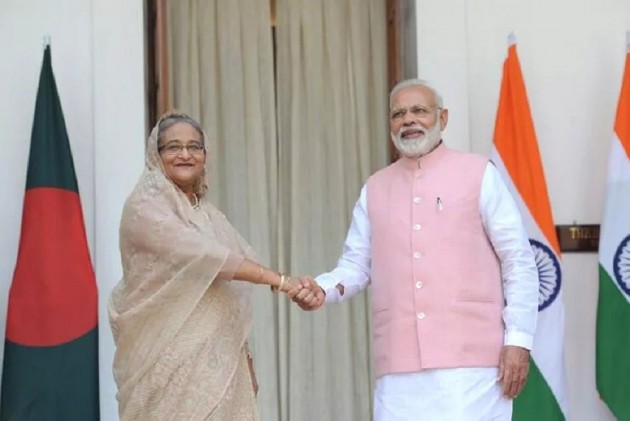 Bangladesh Prime Minister Sheikh Hasina has been a true friend to India. Ever since she came to power, she has been sensitive to New Delhi’s security and strategic concerns. India could not have hoped for a better neighbour.

Violence and terrorism in Assam have come down, thanks largely to Hasina’s generosity. One of the first acts of her government, when it came to power in 2009, was to hand over leaders of the United Liberation Front of Assam (ULFA) operating out of Bangladesh back to India. Insurgent groups of the northeast had found it easy to slip across the border to escape the Indian security forces. All insurgent camps were shut down and unlike the previous governments in Dhaka, Hasina made it plain that anti-India forces were not welcome. Pakistan’s Inter-Services Intelligence (ISI) also got short shrift in Bangladesh. But today, China is spreading its wings in Bangladesh, literally India’s backyard.  Pakistan’s Prime Minister Imran Khan was on the phone with Hasina in an attempt to mend fences with her. The opportunity for China and Pakistan was provided by the ruling party's domestic agenda.

Foreign Secretary Harsh Shringla has rushed to Dhaka on fears of growing Chinese interest in Bangladesh. Earlier Beijing announced tariff exception for 97 percent of exports from Bangladesh. During the pandemic, China sent out a medical team to assist the government. Bangladesh has also allowed a Chinese company to conduct human trials for a vaccine that it is testing. All this was keenly followed by New Delhi. But alarm bells rang out with China’s announcement of USD one billion dollar for a project on the Teesta river. Ironically, India and Bangladesh have had major problems about sharing of Teesta waters.

During UPA rule, former prime minister Manmohan Singh’s visit to Dhaka in 2011 when a deal was to be signed, West Bengal chief minister put her foot down, and no agreement has so far materialised.

The foreign secretary flew to Dhaka on Tuesday and met Prime Minister Hasina Wednesday afternoon. He is carrying a message from Prime Minister Narendra Modi. Shringla was India’s high commissioner to Bangladesh before he moved to Washington on a short stint and returned to head the ministry. Shringla knows Bangladesh well and has a good equation with all the top brass of the ruling Awami League.  He would also hold talks with foreign minister A.K. Abdul Momen and other senior ministers.  Momen had some time ago complained about the demeaning way a section of the Indian press portrayed Bangladesh.

Much of the fault in the downturn in ties lies with India. Use of issue of illegal influx of Bangladeshi immigrants as an election plank by the ruling dispensation harms ties with a friendly country.  It shows little concern for India’s strategic interests. But the ruling BJP, including its powerful home minister Amit Shah, has flagged this as a major election issue. Shah has earlier dubbed Bangladeshi migrants as “termites”. Dhaka had said not a word at that time. Hasina’s government had also not protested the scrapping of article 370 and the crackdown on Kashmir. But Assam’s National Register of Citizens and the Citizenship Amendment Act (CAA) are major concerns.

First the CAA. Through this amendment, India decided to fast track citizenship for minorities facing religious persecution in Pakistan, Afghanistan and Bangaldesh. Hindus, Sikhs, Christians, Buddhists could get refuge in India. All but Muslims would be admitted from these three countries.  While introducing the bill in the Lok Sabha, home minister Amit Shah spoke of religious persecution in these three countries. Realising that the Hasina government would be offended, Shah clarified in the Rajya Sabha that he was not referring to the current situation in Bangladesh but of previous military rulers of that country. The Awami League government prides itself in being a modern democratic nation not defined by religion. Hindus in Bangladesh today do not fear persecution. So lumping Bangladesh with Pakistan and Afghanistan certainly did not please Dhaka. But again it showed restrain. There were no public comments.

Assam’s problem on influx from Bangladesh is perennial. There was a massive popular movement in the early ‘80s but the agitation did not affect ties with Dhaka. Now, however, with the NRC and loose talk of pushing back foreigners back to Bangladesh is naturally of concern. Though India has repeatedly assured Dhaka that the NRC is a domestic issue, the worry is many of the Bengali-speaking Muslims placed in armed camps could try to escape prison and find their way to Bangladesh. The Delhi riots as well as the general anti-Muslim trend in India, has disturbed many citizens of that country. Students had threatened massive protests when Prime Minister Narendra Modi was scheduled to visit Dhaka to take part in the birth centenary celebrations of Mujibur Rahman, the founder of Bangladesh. The visit was cancelled thanks to the pandemic.

India’s constant hammering of illegal immigration from Bangladesh is making the normally friendly Bangladeshi citizens angry. It is not just the opposition but supporters of the Awami League who are disappointed with India. Shringla will do his best and perhaps control the slide, but with elections in West Bengal slated for early next year the Bengali-speaking Muslims and illegal influx will again come up in a big way.