The Rajapaksa government will naturally do a tightrope walk between the India and China and take advantage of the situation. 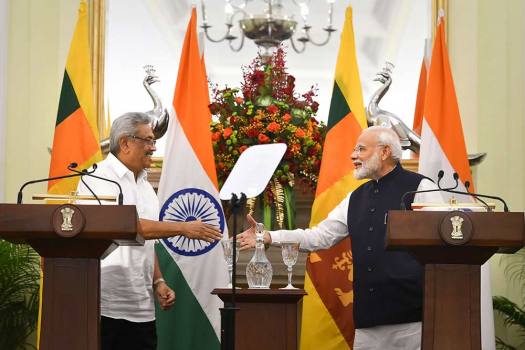 The Rajapaksa brothers are back with a bang, with Sri Lankan voters once again backing a decisive political leadership. Mahinda Rajapaksa will be sworn in as the Prime Minister for the fourth time after his party registered a landslide victory in the general election. Despite warnings from liberals about threats to freedom and liberty, the electorate turned a deaf ear, and the Sri Lanka Podujana Perumana (SLPP) won a total of 145 seats, just five seats short of a two-thirds majority in the 225-member Parliament.

The opposition, meanwhile, is in tatters. Former Prime Minister Ranil Wickremesinghe’s United National Party (UNP) won only one seat. Samagi Jana Balawegaya (SJB)—the breakaway faction of the UNP—headed by Sajith Premadasa, emerged as the second largest party with 54 seats. The Tamil National Alliance (TNA), the party representing interests of the Tamil minorities, also lost several of their previous constituencies. It won 10 seats as opposed to the 16 in the previous Parliament.

The message from the electorate was clear. The government’s response to the pandemic was much appreciated by voters. Sri Lanka’s early lockdown had worked better than India’s. The island state now has 2,839 cases, with 2541 recoveries and the death toll stands only at 11. This record of the Rajapaksa government was compared with the performance of the previous administration’s response to another crisis. The 2019 Easter bombings found the government in shambles. Although India had warned Colombo of a terror attack during Easter, nothing was done. All this played on the mind of the electorate while voting for the Rajapaksa family.

Prime Minister Narendra Modi was the first world leader to congratulate Mahinda when it was clear that the SLPP was riding to victory. Mahinda immediately tweeted his thanks and promised to work closely with India.

Sri Lanka is of strategic importance to India’s security and it is imperative to cultivate ties with a neighbour a stone’s throw away from its mainland. China’s looming presence in the island nation and Rajapaksa’s close ties with Beijing is a major concern. China has been steadily making inroads into India’s neighbourhood, whether in Nepal, Bangladesh, or Sri Lanka. Delhi wants to make sure that India remains relevant in Colombo.

The Rajapaksa’s are revered by the Sinhala-Buddhist majority in Sri Lanka for eliminating the Liberation Tigers of Tamil Eelam (LTTE). The last stages of the military campaign against Prabhakaran in 2009, was criticised for widescale human rights abuse. India together with the US and other Western democracies introduced resolutions in the UN against Sri Lanka. As Colombo found itself isolated, it turned more towards China.

In 2014, alarm bells rang in New Delhi when Chinese submarines docked in Colombo port. China has been spreading its wings across the island, winning major contracts. During the 2015 presidential elections, India together with other countries was delighted to see the back of Mahinda Rajapaksa. But the farsighted former president, while out of office, tried to mend ties with New Delhi. Every time he visited India after leaving office, he made it a point to meet with Prime Minister Modi.

India too does not want to take any chances. Soon after Gotabaya Rajapksa won the presidential elections in 2019, Delhi signaled it wanted to start afresh with the new government. Foreign minister S. Jaishankar was in Colombo days after the elections to extend a hand of friendship. Prime Minister Modi’s call to Mahinda Rajapaksa, even before the official results were declared, was also aimed at making the first move.

The majority of Sri Lankans had in the past always regarded India as a friend of the Tamil minorities on the island. Delhi had tried to break away from that image and had succeeded, but now it has tough competition from China which has invested billions of dollars in the island country. But the debt trap triggered by Chinese loans is a worry for Lanka. The Hambantota port project now leased to China is a case in point. Significantly, it was first offered to India. China is also building the new Colombo port city for $1.4 billion, the largest FDI project in the island state. Sri Lanka plans to develop the city into a major financial hub. The Colombo port city project when completed is expected to transform the country’s economy.

India and Japan were to collaborate to build the East Container Terminal at the Colombo Port, about three kilometers away from the Chinese project. The MOU between Sri Lanka, India and Japan was signed in May 2019, when Sirisena was the president. But the project has since faced massive problems with a major trade union strike. President Gotabaya Rajapaksa had in July this year appointed a committee to look into the entire deal. Moreover Mahinda Rajapaksa had said that there was no final agreement on the deal.

During the election campaign, the JVP (Left-wing party) consistently raised the East Container Terminal issue. Nalinda Jayatissa of the JVP said: “If the Colombo harbour is handed over to India we will be left with nothing. What will happen to the port workers? They have already launched a hunger strike; the government says nothing. We call upon the President and the Prime Minister to abrogate the agreement to sell ECT to India.” However, with a strong mandate, the government can afford to do what it wants. Some say China is against India and Japan getting the contract.

India has its work cut out. The Rajapaksa government will naturally do a tightrope walk between the India and China and take advantage of the situation. Like every country, Sri Lanka will consider its national interest while balancing relations between India and China. Delhi needs to make sure that it drives home its advantage in terms of cultural, religious, and people to people ties.