The Congress or any other Opposition party will now find it difficult to counter the powerful images of the PM Modi walking amid the soldiers and chants of ‘Vande Matram’ and ‘Bharat Mata ki Jai’. 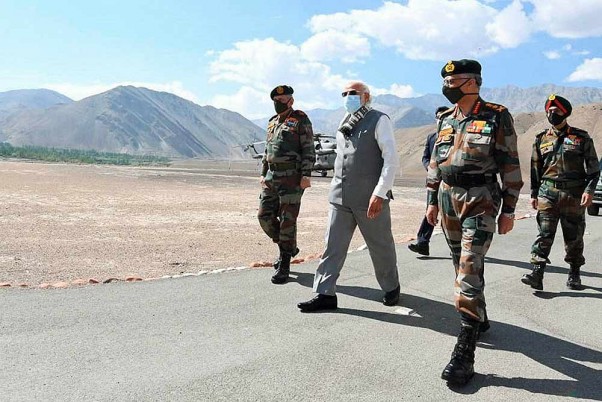 When Prime Minister Narendra Modi addressed the nation on June 30, many were left disappointed when he did not say a word about the standoff with China at Line of Actual Control (LAC) in Ladakh. That was probably a strategic move. Every conflict doesn’t have to be responded with bluster and bombast.

However, as PM Modi reached Nimu – a forward base of the Indian Army, 34 km from Leh, and at a height of 11,000 feet – on Friday, flanked by Chief of Defence Staff (CDS) General Bipin Rawat and Army Chief MM Naravane, he made the strongest statement ever that no words could have matched. PM Modi’s visit to Ladakh to review the security situation came a fortnight after the Indian Army lost 20 men in the unprecedented Galwan Valley violence on June 15. His message to the soldiers, guarding the LAC in those inhospitable terrains and sub-zero temperatures, was that of gratitude and support. He visited the injured at base hospital in Leh and reiterated the nation’s indebtedness to their valour and fortitude.

Later, as he addressed the soldiers of Indo-Tibetan Border Police (ITBP), Indian Air Force and the Army – surrounded by the Zanskar range -- the PM evoked emotive issues of nation’s security, the sacrifice of the brave soldiers and their grit to take on the enemy and protect the borders. The PM said India has always stood for peace. “Only the brave want peace. We are for peace but we have the courage to protect our nation,” he said.

‘Era Of Expansionism Is Over’: Top Quotes From PM's Ladakh Speech

Even as his resolve of support will galvanize the forces, PM’s unannounced visit to the forward areas will also address the domestic political concerns. His gesture is likely to emphatically silence the critics, led by Congress leader Rahul Gandhi, who have accused him of quietly ceding territory to China. PM Modi’s firm message to his domestic audience is that Ladakh is very much a focus area and definitely not forgotten. The Congress or any other Opposition party will now find it difficult to counter the powerful images of the PM walking amid the soldiers and chants of ‘Vande Matram’ and ‘Bharat Mata ki Jai’.

And then there is the unequivocal message to China – India is not a pushover and will not get cowed down by its muscle-flexing. Even though military-level and diplomatic talks are on between India and China, PM Modi’s visit is the most compelling symbolism of dominion. He also conveyed to the world that India cannot be trifled with and is a force to reckon with in the region.

If anyone had any doubt, he conveyed the strong message in words – “Days of expansionism are over. Expansionist forces only create hurdles in global peace. They have either been defeated or forced to retreat. The world wants peace, security and development.”