COVID-19 And Malaria: Through The Ayurvedic Gaze 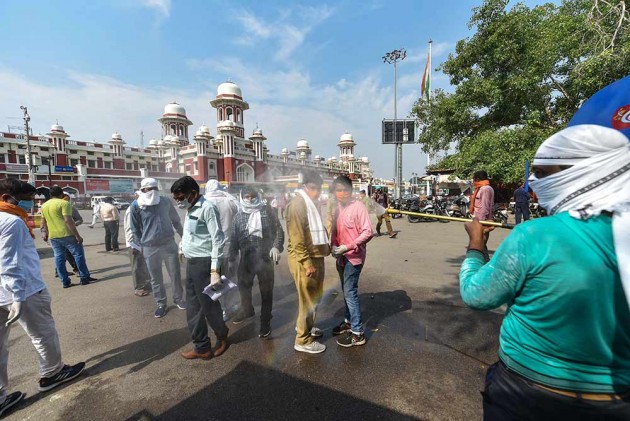 Even a cursory glance at the spread of COVID-19 pandemic across different regions of the world reveals a variety of pattern, some incidentally interesting and a few possibly instructive. While rich-poor, urban-rural and cold-warm polarities of the zones of its spread appear intriguing, it’s also quite instructive to see the rather clear instance of the pandemic being less virulent in areas that are regarded as Malaria-prone. Be it the African mainland barring the Mediterranean coastal countries, central patch of the two continental Americas or even South and Southeast Asia; they have all been places where Malaria transmission occurs, and yet these places have so far comparatively been less impacted by the viral pandemic.

While there has been a putative inverse correlation between the spread of COVID-19 and Malaria, what has so far escaped the attention of readers is an interesting medical classificatory principle – developed by ancient Indian physicians, notably Sushruta (roughly two millennia ago) – that further allows us to discern the pattern of COVID-19’s spatial spread in India.

What gets attempted in the following passages is not a mere jubilant reiteration of the indic-tradition-having-said-so-long-ago assertion, but a more researched dovetailing of crucial Ayurvedic medicinal taxonomical categories, namely Jangala and Anupa, with the emerging regional numbers of COVID- 19 cases and the associated fatalities in India till date. Beyond anything xenophobic and cathartic, this is about hard COVID-19 numbers ratifying the Ayurvedic categorization of ecological variables – biotic and abiotic – that evidently are coterminous with the modern medical frontiers of Malaria in India. The same Malaria, whose treatment drug, hydroxychloroquine, still holds its neck out as one of the possible panacea for some defense against COVID-19.

Before we juxtapose the geographical spread of COVID- 19 numbers in India to the mapped geography of the Jangala and Anupa Ayurvedic categories, a quick discussion about the two classificatory categories seems to be very much in place. The Ayurvedic treatises written by Charaka and Sushruta are replete with taxonomical categories like the three doshas, six rasas and so forth. Of them figures the categories of Jangala and Anupa. While – as is true for several other classificatory schemata – no parameters are explicitly provided as the underlying basis, one has to discover inner logic of the schemata by examining its details and attributes.

Francis Zimmermann, the noted scholar in his monumental work that first appeared in the 1980s, convincingly established the terms Jangala and Anupa as the bioclimatic polarities between the arid and the marshy regions (see Map 1). Using the scientific principles of soil typology and biocenoses (a modern ecological term to denote “communities of living creatures that share the conditions of life in a given place”), he mapped the biotic and abiotic components and persuasively subsumed the empirical data into the two notional categories: Jangala ( for dry climate, thorny shrubs, acacia trees, partridges, gazelles to antelopes as animals, and finally men of bilious temperament) and Anupa ( for wet and marshy zone, palm trees, wild duck, elephants to buffalos as animals, and finally men of phlegmatic temperament). 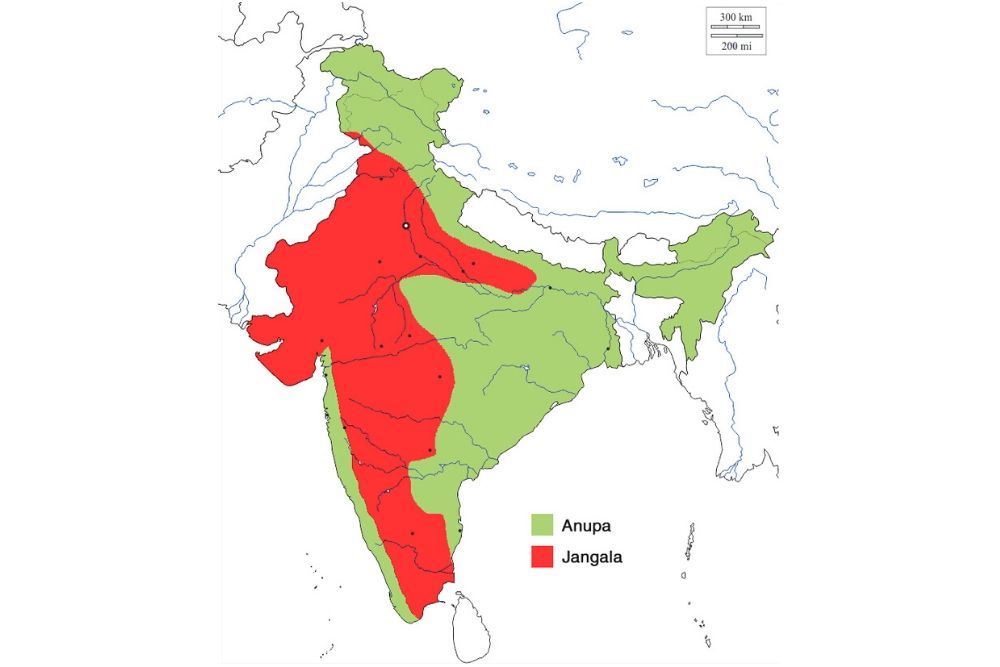 Ayurvedic therapy of restoring the balance of body constituents by compensating for contraries is legendary. Therapeutic interventions in the Ayurveda, in its crudest reduced form, either ‘excite’ or ‘calm’ the three doshas (kapha, vayu and pitta). As is evident, and true for many other pre-modern medical systems including that of the Greeks, these operative insights of treating the ailment through the restorative actions of materiamedica drawn from the binary opposite ecological or biocenoses categories (Jangala and Anupa) are not biochemically- arrived , but result from a simple biological point of view that “flesh does nourish flesh.” Interestingly, however, Zimmermann, wading through the “semantic profligacy” of the Ayurvedic hemistichs and cosmological imageries, could actually map the geography of Jangala and Anupa on the real physical plain of India, and thereby discover that the latter is coterminous with the zone where Malaria is endemic while the former coincides with modern medical zone where it could be epidemic in India.

With the end of two rounds of the most stringent countrywide lockdown in the wake of the COVID-19 spread in India, the government has come out with a dynamic list of the Red, Orange and Green districts representing the viral infection from the severest to negligible numbers in the same order (see Map2).Let us try and juxtapose these three COVID-19 zones with the two traditional medicinal frontiers: Jangala and Anupa, as shown in Map 1. 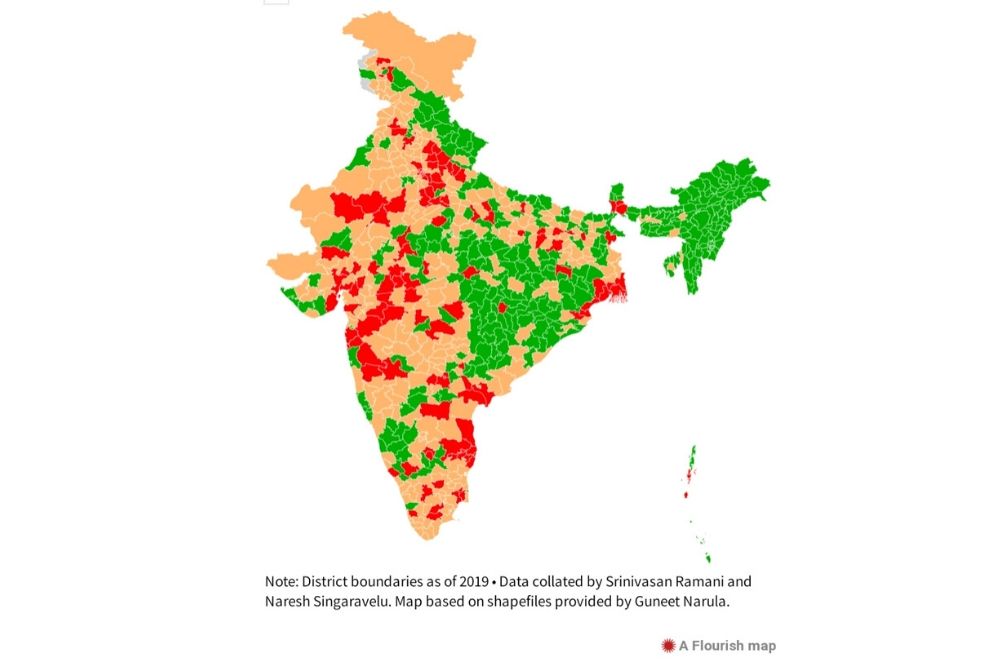 Once we start plotting these Red, Orange and Green districts on the map of India – divided in the Jangala and Anupa zones - we find that while a number of states like Punjab, Haryana, Rajasthan, Gujarat, Uttar Pradesh and a few others get neatly subsumed under the Jangala category, a few of the states like Himachal Pradesh, Uttarakhand, Bihar, Madhya Pradesh, Chhattisgarh, Telangana, Karnataka, Maharashtra have their areas divided between the two categories. Interestingly, it gets observed that in the cases of Himachal, Uttarakhand, Bihar, Madhya Pradesh, Chhattisgarh and Telangana, a majority of Red and Orange districts fall in the Jangala geography with just a few exceptions. The cases of Maharashtra and Karnataka too betray the same trend, though the case of Mumbai – the city with the largest number of COVID-19 cases – certainly stands as an exception alongside some Red districts in West Bengal as they happen to fall in the Anupa category. While the distribution of actual COVID-19 positive cases and associated fatalities would bring out the contrast between the two categories all the more, the big picture – even in terms of the distribution of the three zones across the two categories – reveals an instructive inverse relation of the COVID-19 spread in Malaria endemic area (Anupa) and a positive relation of the two in areas where Malaria is epidemic (Jangala).

This pattern – emerging as an Indian microcosm of the global inverse relation of COVID-19 and Malaria - simultaneously reiterates the veracity of a crucial medical frontier, identified as Jangala and Anupa in the ancient Indian Ayurvedic treatises. While the proposition like people in Malaria-endemic areas having developed some sort of basal immunity against such pathogens across generations is a matter that can best be examined by the scientists, underpinned as these glaring patterns are on the millennia-old medical classifications, one should desist from casual dismissal of the early Indian medical system as nothing more than a phantasmagoria: bereft of any empiricism and scientificity. Though it has been very usual of such instances of apocalypse-like-situation for modern medicine to generate a nostalgic clamour of reaffirming faith in the wisdom of holistic and traditional healing systems like the Ayurveda, we probably here have instructive reasons to temper the unbridled march of modern medicine that seems exclusively fueled by biochemistry to the arrogant exclusion of the rest.