India Should Not Carry Colonial Baggage In Addressing Environmental Issues

Time is running out. India must revisit its spiritual roots to discover its own form of environmentalism 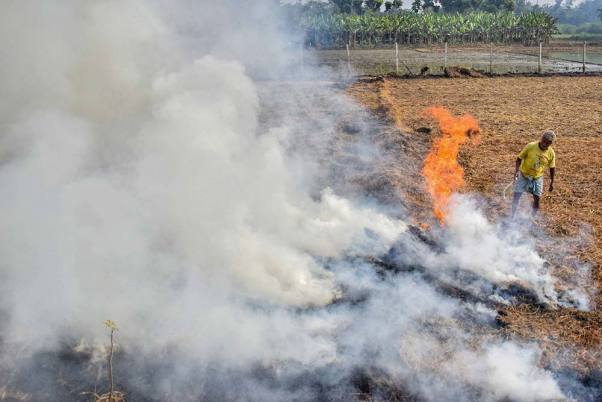 The environmental crisis is the canary in the mineshaft of modern society. Modern society and its reliance on maximising profit have paved a path of human advancement that runs contrary to the holistic growth of eco-friendly consciousness. The sketching of major factors resulting in the crisis are many but the underlying reason is the extracting behaviour that guides the Western culture which is based on modern technology that has effortlessly worked towards exploiting the earth’s resources to satisfy the whims of human fulfilment and in the process ignored the menacing effects.

Today the question is not whether climate change is happening but rather what can be done with the remaining time we have to restore it. The question at the same time provides a glaring prospect to reflect on the environmental practices of developing nations such as India and to understand how they differ from the Western countries.

The blame game is a reality when it comes to addressing environmental issues. For the past several decades, the West has used it as a tactic to shift the focus of responsibility towards the developing nations, which is highly erroneous. India witnessed one of the earliest environmental movements in the 1700s with the Bishnoi Movement in the Marwar region of Rajasthan, whereas, in the Western countries such as the USA, environmental movements have catalysed only after climate change was recognised as a reality.

It has been noticed by several scholars that in Western countries, the movements have always taken a political shape rather than being reflected in actions at the grassroots level. In these countries, environmentalists form political parties, for example, the Green Party, in parliamentary systems of government, like Germany. However, in the case of India, the common people may have taken the help of political parties, but they still have not formed political parties to address the issue of environmental change, rather they come together as responsible citizens of the nations and create pressure group to fight for the cause.

Thus, the eco-conscious sensibility in India is a continuous process with a genesis from antiquity. Here nature and human society are thought of in consonance with one another rather than two separate entities. People built their lives around the magnificent grandeur of nature and affix the environmental concerns with the fundamentals of culture in society. On the contrary, in the West, nature and humans are seen through two diverse lenses of development where humans feel estranged from nature. Unlike the Old Testament of the bible that holds an anthropocentric viewpoint where humans are considered to be the centre of the world and things are made for his consumption, the Vedas emphasise that every being has a soul and is equally important.

Even though the western notion of enlightenment has been achieved and imperialism has disappeared, nevertheless its memory, ideology and political practices still persist and are being perpetuated to Orientals and they fall prey to such dominant ideologies. The Western countries trick the general public of these developing countries with fancy language and impose their idea of development which in turn has a tremendous impact on the environment. Before they realise it, the damage is done at the cost of great environmental loss which would, later on, affect the citizens of the country.

Edward Said in “Culture and Imperialism” (1993), provoked a discourse emphasising the hybrid form of culture and sharp criticism of the west to continue their dictation of the power politics.  Similarly, the influence and interference of the Western countries do not stop here rather it dictates major debates about the development and environmental concerns in these countries.

For example, Australia’s bush fires have dominated global headlines for months, but the forest fires of Borneo and Sumatra that were far more destructive were not covered at all. This is because the climate change debate has always been dominated by Western narratives that distort and oversimplify the problem. And due to colonial baggage Indian state carried the same development model.

What differs in the approach of the West and India is that the people of India believe in ‘actionism’, where they are led by their consciousness and spiritual values and try to bring qualitative and recognisable change by their actions on the ground. On the contrary, when we see western environmental activist(s) who are inspired by western philosophy, we find there is much more agitation than action. Their activism on environment protection demands the involvement of big actors, organisations and corporates but failed to become a determinant in the process at an individual level which has the potential to bring real change and valuable difference.

The individual practices of reducing carbon footprint and planting more trees or working for local water bodies can give a local solution to a major global problem. Hence, the binary of actionism and activism rolls out the major divergence between the Western outlook and the Indian approach.

India’s environment protection movement is deeply rooted in spirituality where every living being is considered to have a soul in it. The Bishnoi movement is a paramount example of such a spiritual connection. The community forbids the harming of trees and animals and follows the principles of Guru Jambaji. In 1730, the ruler of Jodhpur wanted to build a new palace and ordered his soldier to gather woods from the Khejarli forest, where Bishnoi villagers cultivated khejri (acacia) trees.

To save the trees 363 Bishnoi villagers gave their lives before the news broke to the king and he declared the state as a protected area. The voluntary martyrdom of the villagers later became an inspiration for the Chipko movement and inspired generations of environmental movements. Similarly, the case of Padma Shri Saalumarada Thimmakka who planted 8,000 trees over a span of 80 years is a classic example of the love and care that the people of India have for the environment.

The Indian scientific community has also transgressed the mechanistic idea of viewing environmental concerns and relies on a path of holistic development. Jagdish Chandra Bose throughout his career remained firm in his belief that nature forms an intrinsic part of human existence and any scientific or technical advancement made should be towards the benefit of both. His scientific findings reaffirmed the traditional belief that trees have life.

The youth of India are conscious of climate change. ABVP’s Students for Development (SFD) was founded in the 1990s, this student-led environment movement was envisaged much before the environmental threats were recognised as a reality in the world. SFD aims to bring change to the community through individual change. And its motto of “Sarvepi Sukhina Santu” inspires to knit the coherence between Jal (Water), Jangal (Forests), Jameen, (Earth), Janwar (Animals) and Jan (people), it proposes a model of development taking all actors along.

The idea of development cannot be envisaged by leaving any one of them. SFD endeavours to build a community of conscious beings who remain attentive to their surroundings and work to preserve nature and its entities.

India has always seen Goddesses in Rivers, plants and animals. However, the making of Whanganui River as a legal person in New Zealand initiated a debate all over the globe. In India, the High Court of Uttarakhand gave Ganga and Yamuna the status of a legal person but the Uttarakhand state went to Supreme Court and stayed the order. Every deity has its own rights in India, in the case of Sabrimala at the Supreme Court, an argument was made regarding the rights of a deity in the same way we should give rights to our natural deities and make them legal person. The giving of legal rights would open debates around past injustices but this will certainly allow for a space to acknowledge the evils of human advancements and make amends.

The world needs to learn and reflect on the practices adopted by the Indian society in its indulgence with nature and the transcendental link that motivates people to connect with the environment during the process. India is a global agricultural powerhouse and its economy is heavily dependent on agriculture. Our cultures, festivals and everyday lives are highly intertwined with nature. Communities and individuals are more aware of their surroundings than big business houses and their traditional knowledge and practices can help come up with favourable solutions to engage with concerns of environmental crisis. The modern capitalist consciousness created by the western narrative is a dangerous way forward due to its extractive character and therefore, needs immediate alterations.

(The author is a research scholar at the Centre for Studies in Science Policy, School of Social Science, JNU. Views expressed in this article are personal and may not reflect the views of the Outlook Magazine.)