Rajasthan Assembly Election: Congress, BJP To Slug It Out In Gehlot's Home Territory

The 199 seats of the 200-member Rajasthan Assembly go to polls on December 7 and results will be declared on December 11. 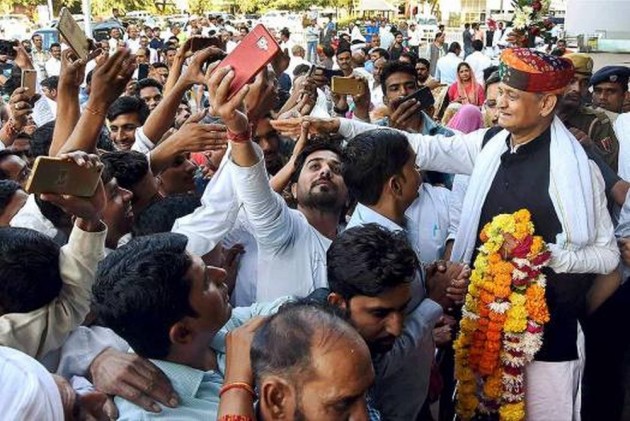 As poll campaign gains momentum in Rajasthan, former chief minister Ashok Gehlot's home turf Jodhpur is bracing for an interesting fight with the Congress putting all its efforts on 10 seats of the district, of which the BJP had swept nine in the last assembly elections in 2013.

The Congress has given tickets to eight new candidates, while retaining Gehlot from Sardarpura and Hira Ram from the Bilada constituency.

On the other side, BJP has repeated all its sitting legislators in the nine seats it had won last time. On the one seat the saffron party lost last time, Gehlot's Sardarpura, the party has again fielded the candiate who had fought against the Congress heavyweight five years ago.

BJP has pitted Shambu Singh Khetasar opposite Gehlot, who was defeated in the 2013 election by 18,478 votes. Khetasar is the chairman of the State Seed Corporation and enjoys a ministerial status in the current BJP government.

"Sardarpura is a strong bastion of Gehlot. He has been elected from this seat consecutively since 1998," Congress spokesperson Ajay Trivedi said.

"In the last four assembly elections, the BJP had changed its faces to defeat Gehlot, but none of them has been able to snatch Sardarpura from the Congress," he added.

The BJP candidate, however, exuded confidence of winning the seat.

"Gehlot has an upper hand due to a caste-based vote bank. There is no other basis. Public sentiments are not with the Congress. Gehlot has neglected constituency," Khetasar told PTI.

Gehlot has, however, rubbished these allegations.

"Since Jodhpur is my hometown, it has suffered a step-motherly treatment by the Vasundhara Raje government. She purposefully deprived Jodhpur from developmental works," he said.

Congress' other candidates for the district's assembly seats include three faces from well-known political families of the state, including some linked to controversies in the past.

While Mahipal Maderna and Malkhan Singh Bishnoi, the main accused in the sensational Bhanwari Devi case, are currently facing trial and are in judicial custody, their family members are in the electoral fray.

Congress has given ticket to Divya Maderna, Mahipal's daughter, from the Jat-dominated Osian constituency. In 2013, Divya's mother, Leela Maderna was fielded from the same seat but she had lost to the BJP's Bhera Ram Siyol.

Malkhan Singh Bishnoi's son Mahendra Bishnoi has been given a ticket from Luni, which is also dominated by the Jat community. Mahendra's grandmother Amri Devi had contested from Luni last time but she had lost to BJP's Jogaram Patel.

The 199 seats of the 200-member Rajasthan Assembly go to polls on December 7 and results will be declared on December 11.