Ravindra Jadeja was hit on the helmet by a Mitchell Starc bouncer. The left-hander then limped off after the end of the Indian innings 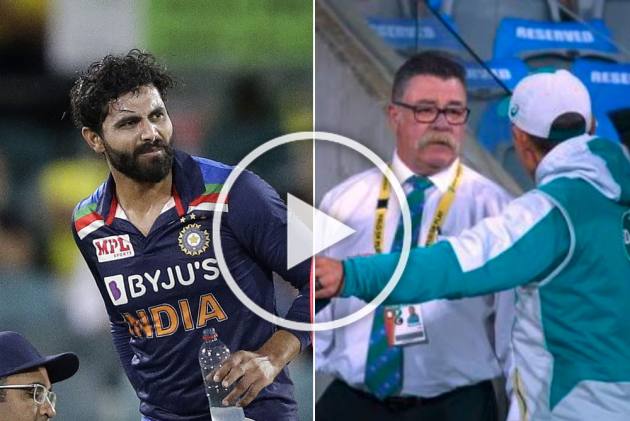 Ravindra Jadeja, who helped India post a fighting total in the first T20I against Australia, didn't take the field as the visitors defend 161 at Manuka Oval, Canberra on Friday.

Jadeja, 31, was hit on the helmet by a Mitchell Starc bouncer in the last over of the Indian innings. The left-hander remained unbeaten on 44 off 23, and walked off limping.

The incident where Jadeja got hit in the helmet.

After taking the heat, Jadeja hit Starc for back-to-back fours. Watch it here:

Later, the Indian cricket board (BCC) released a statement saying, the all-rounder has been replaced by Yuzvendra Chahal.

It read: "UPDATE: Ravindra Jadeja was hit on the helmet in the final over of the first innings of the first T20I."

"Yuzvendra Chahal will take the field in the 2nd innings as a concussion substitute. Jadeja is currently being assessed by the BCCI Medical Team. #TeamIndia #AUSvIND"

Yuzvendra Chahal will take the field in the 2nd innings as a concussion substitute. Jadeja is currently being assessed by the BCCI Medical Team. #TeamIndia #AUSvIND pic.twitter.com/tdzZrHpA1H

“Look Justin I’m just not sure it’s even the best version of A Star is Born, let alone the greatest film of all time.” pic.twitter.com/2zNuf8XHBa

Interestingly, Chahal got the wickets of  Steven Smith and Aaron Finch.

Earlier, KL Rahul continued his impressive run in the shortest format with yet another fifty but it took Jadeja's brilliant back-end flourish to take India to a fighting 161 for 7.

The Indian vice-captain hit 51 off 40 balls but leg-spinner Adam Zampa (1/20 in 4 overs) and all-rounder Moises Henriques (3/22 in 4 overs) were brilliant between overs 11th and 15th, which shifted the momentum in favour of the home team till Jadeja came into play with a 44 not out off 23 balls.

However, Jadeja (five fours and a six), who suffered from hamstring trouble, launched into Josh Hazlewood and Mitchell Starc in the final two overs that yielded 34 runs taking Indian to a par-score at the Manuka Oval.