Bangladesh now lead the series 2-1. Bangladesh won the first T20 by seven wickets and the second match by four runs 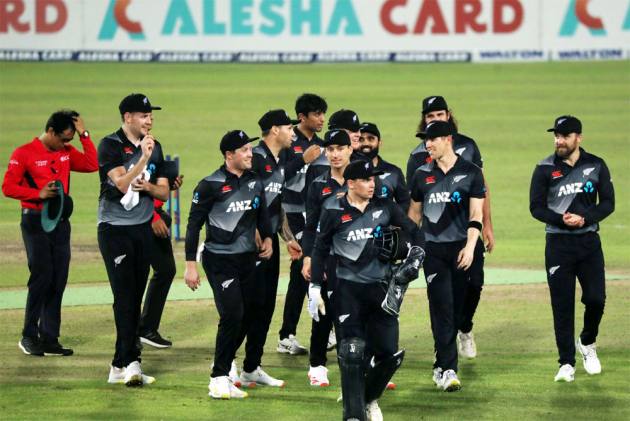 Left-arm spinner Ajaz Patel claimed a career-best 4-16 as New Zealand kept alive its Twenty20 series against Bangladesh with a thumping 52-run victory in the third game on Sunday.

Off-spinner Cole McConchie (3-15) and left-arm spinner Rachin Ravindra (1-13) also played their part in dismissing Bangladesh for only 76 in 19.4 overs after New Zealand had recovered from 62-5 to a total of 128-5 on a slow surface.

It was Bangladesh's joint second-lowest total in this format.

New Zealand's Henry Nicholls and Tom Blundell shared 66 runs for the unbeaten sixth wicket. Nicholls was not out on 36 off 29 deliveries with Blundell on a run-a-ball 30.

Bangladesh now leads the series 2-1. Bangladesh won the first T20 by seven wickets and the second match by four runs.

The fourth game is on Wednesday.

After opting to bat first, New Zealand made a disappointing start. Finn Allen was out for 15 and fellow opener Rachin Ravindra also perished to a big shot when he appeared set to flourish with a 20-ball 20.

Bangladesh pacer Mohammad Saifuddin (2-28) struck twice in an over, dismissing Will Young (20) and Colin de Grandhome (0).

A big blow for New Zealand came when offspinner Mahedi Hasan got rid of skipper Tom Latham (5) with a return catch.

Nicholls and Blundell resisted and, playing with caution, they helped the side reach a total good enough to defend.

It got better when McConchie removed Bangladesh opener Liton Das (15), who had made an aggressive start by hitting three fours in the first two overs.

Patel then came into action and immediately made an impact with a double strike that included the wicket of Shakib Al Hasan, who played a rash shot to be out for a duck.

Ravidra dismissed opener Mohammad Naim (13) with Bangladesh relying on senior batsmen Mushfiqur Rahim (20 not out) and captain Mahmudullah to bring them back into contention.

But Patel was relentless as he removed Mahmudullah for 3 on his 100th T20 match and Afif Hossain in consecutive deliveries, leaving Bangladesh on 43-6 from which it never recovered.