Frenkie de Jong scored for the third time in six games for Barcelona in Sunday's 2-0 win over Elche and earned plaudits from Ronald Koeman. 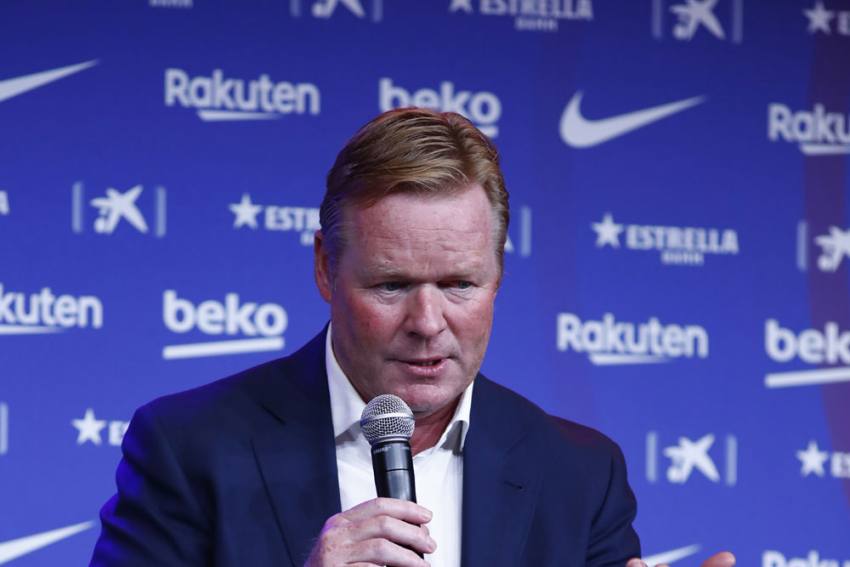 Ronald Koeman praised Frenkie de Jong for improving the attacking aspect of his game after chipping in with another goal and an assist in Barcelona's 2-0 win over Elche. (More Football News)

The Netherlands international profited from a Diego Gonzalez error to give Barca a 39th-minute lead and crossed for substitute Riqui Puig to score a late second in Sunday's LaLiga clash.

De Jong now has three goals and two assists in his last six games in all competitions, while his five LaLiga goals in 18 months at Camp Nou is one more than he managed in five seasons in the Eredivisie.

He also contested more duels (11) than any other Barca player at Estadio Martinez Valero and no visiting player intercepted the ball more often (twice).

But it is the attacking side of De Jong's game that most pleased head coach Koeman, who wants his midfielders to take the goalscoring burden off the forward line.

"The three forwards aren't enough; we need the midfielders to score too," Koeman said. "It's good that he's scoring and assisting.

"He's always improving. We want the midfielders to get into the box and get up there."

Fellow midfielder Puig followed that advice by getting on the end of De Jong's cross and heading past Edgar Badia from his seventh touch after being introduced from the bench.

It was the academy graduate's first goal at senior level but he admitted to being disappointed by his lack of playing time this term, having made only one start in all competitions.

"I'm having quite a difficult season because I'm not used to playing so little," Puig told Movistar.

"But I'm getting stronger mentally. I'm happy with the team's hard work and how my team-mates are helping me."

Victory for Barcelona was their fourth in a row in the league, three of those without conceding, as they moved up to third place.

The Catalan giants have not conceded in any of their last nine LaLiga games against Elche, meanwhile, which is their best such run against a single opponent in the competition.

Marc-Andre ter Stegen produced a big save to deny Emiliano Rigoni with Barca 1-0 up and Koeman was grateful for his compatriot's shot-stopping ability.

"They didn't have many chances - they only had one and it came from a big mistake from our defence," Koeman said. "But Ter Stegen was very good in the one-on-one.

"Luckily we have a good goalkeeper, because they could've equalised at that point.

"Defensively, apart from that mistake, we did well. The best thing about today was our pressing and our performance without the ball. We deserved to win.

"I'm very happy with how we won. We've had lots of matches in the last few days and we've kept focus.

"We were better than our opponents. We were patient. We won possession. It was difficult to score because they had lots of men behind the ball. But we pressed well."

Barcelona return to action on Wednesday with a trip to Rayo Vallecano in the last 16 of the Copa del Rey.

Jurgen Klopp: Liverpool 'Wanted It Too Much' Against Man United