Arturo Vidal is adamant Peru's pre-tournament punishment of Chile will have no psychological impact on their Copa America semi-final encounter on Wednesday. 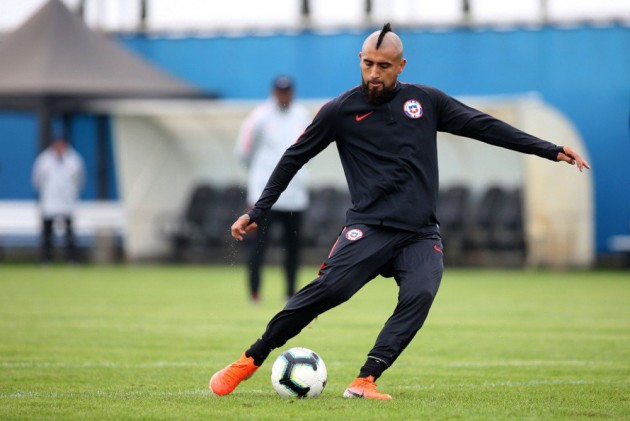 Arturo Vidal is adamant Peru's pre-tournament punishment of Chile will have no psychological impact on their Copa America semi-final encounter on Wednesday.

Emboldened by a recent World Cup appearance, Peru stormed to a rare and impressive 3-0 victory over La Roja in a friendly in Florida in October.

Enzo Roco's own goal and two late strikes from Pedro Aquino made for a surprise result that ended Vidal's run of six successive victories in the fixture.

Experienced utility player Mauricio Isla and centre-backs Gary Medel and Guillermo Maripan also took to the pitch that day and are set to form three quarters of Chile's defence under decidedly more pressure in Porto Alegre.

But with a third successive Copa America crown firmly in view, Barcelona midfielder Vidal insists the present is all that matters.

"First, this is not about revenge for us," Vidal said.

"The friendly matches are to tune up for the national team, to see how the players are.

"Whatever happened against Peru is common in football and we don't have any hard feelings against them.

"This game is different, a semi-final, and it would be historic for us to reach the final. That is our only goal."

Chile remained on track to defend their status as South American champions by squeezing past Colombia on penalties in the last eight.

Peru, who only reached the knockout rounds as one of the group stage's best third-placed teams, upset Uruguay on spot-kicks last time out and are now 90 minutes away from a showpiece clash against either Argentina or hosts Brazil.

"We're in the right condition to tackle this kind of match," said head coach Ricardo Gareca.

"Maybe it's a bigger match than the others before but we can play better."

Bayer Leverkusen's Aranguiz, like Vidal, is one yellow card away from a suspension at the Copa America, meaning the combative midfielder will need to be careful in Porto Alegre. Naturally aggressive in his attempts to win back the ball, it will be fascinating to observe whether a player described as "one of the best in the world" by Vidal curbs his instincts.

Peru have advanced deep into the tournament despite scoring in only one of their four matches. Continue any further and goalkeeper Gallese will surely be anointed a national hero. He crucially denied Luis Suarez in the shoot-out triumph over Uruguay and could have a big say on the semi-final.

- Peru have kept a clean sheet in each of their last three Copa America knockout games (W1 D2), last conceding in such a match in their 2015 semi-final loss to Chile.

- Chile have been eliminated once in five previous appearances in the Copa America semi-finals (against Uruguay in 1999), while Peru have come unstuck in five of their previous six appearances at this stage.

- Eduardo Vargas has scored 38 international goals for La Roja, including a career-high seven against Peru.