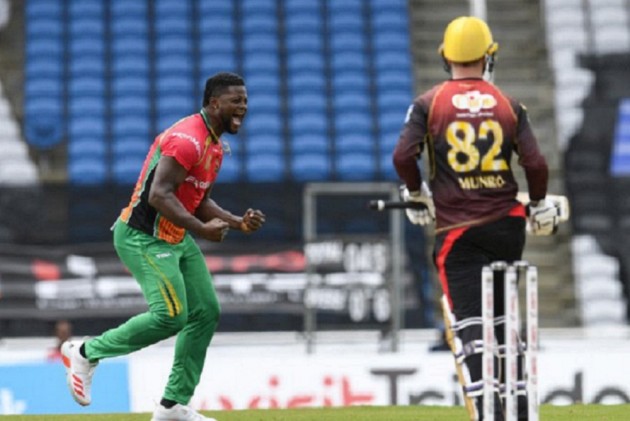 After both teams finished on exactly 138 for nine from their 20 overs, Sunil Narine bowled the Super Over for the Knight Riders and conceded just six runs.

It was left to Shepherd to bowl Amazon Warriors' Super Over and he conceded just four runs to win the game for his team.

In another match, St Kitts & Nevis Patriots also carried on their unbeaten run in the tournament with a six wicket victory over the Jamaica Tallawahs on Wednesday.

Amazon Warriors got off to a perfect start when Chandrapaul Hemraj bowled Lendl Simmons off the second ball of the innings.

The Warriors picked up two more TKR wickets inside PowerPlay but it could have been even better as two chances went down.

A partnership of 39 between Narine and Tion Webster looked promising before the former was caught at mid-on, attempting to hit over the top of the infield.

When Webster was gone, seven runs later, it was left to Colin Munro and Tim Seifert to rebuild the innings.

Munro top-scored with 32 from 28 balls before he was dismissed by Imran Tahir.

A steady flow of TKR wickets prevented them from really get going but a sprightly 21 from nine balls from Isuru Udana took them to 138 for nine.

The Warriors had a wobbly start to their chase with Ravi Rampaul dismissing Hemraj and Odean Smith from successive balls to leave them struggling at 7 for two in the second over.

Shimron Hetmyer and Mohammad Hafeez looked to rebuild but they were tied down by the TKR spinners.

Hafeez was dismissed by Khary Pierre for 16 off 30 balls to leave Amazon Warriors needing 100 runs from nine overs.

Pooran was dismissed by a stunning one handed grab by Akeal Hosein before Shepherd took the game deep with the bat.

Amazon Warriors squeezed out the tie off the last ball before they claimed a famous win in the Super Over.

In another match, the Patriots dished out a disciplined bowling performance to restrict the Tallawahs to 166 for 8.

In reply, the Patriots made it four wins from as many games with another dominant batting display led by tournament's top scorer Sherfane Rutherford.

Put in to bat, the Tallawahs got their innings off to a lightning start with the hard-hitting duo of Chadwick Walton and Kennar Lewis putting on a blistering partnership of 41 runs in 3.3 overs.

Things went from bad to worse for the Tallawahs when Walton had to retire hurt, tweaking his hamstring after running a quick single.

It took an enterprising counter-attack by Rovman Powell and Carlos Brathwaite in the back end of the innings to revitalise the Tallawahs and this was further boosted by some late blows by the lower order to ensure a respectable total.

The Patriots made a similar start in their innings, with Evin Lewis producing the early fireworks, but the wickets of Devon Thomas and Asif Ali in quick succession followed by Evin Lewis left the game in the balance.

Sherfane Rutherford and Fabian Allen then smashed 55 runs from 20 balls to seal the comfortable win.