Real Madrid returned to winning form in style as Karim Benzema and Eden Hazard helped the defending LaLiga champions to a 4-1 rout over Deportivo Alaves. 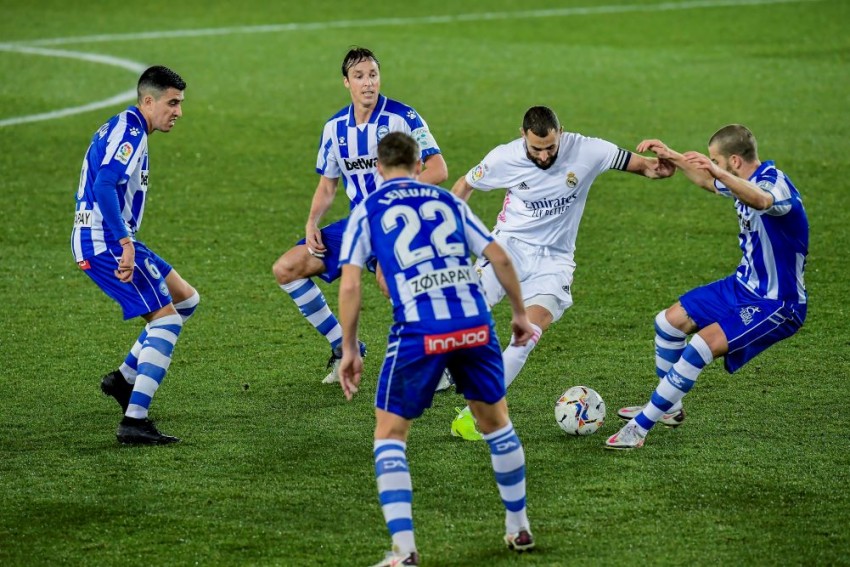 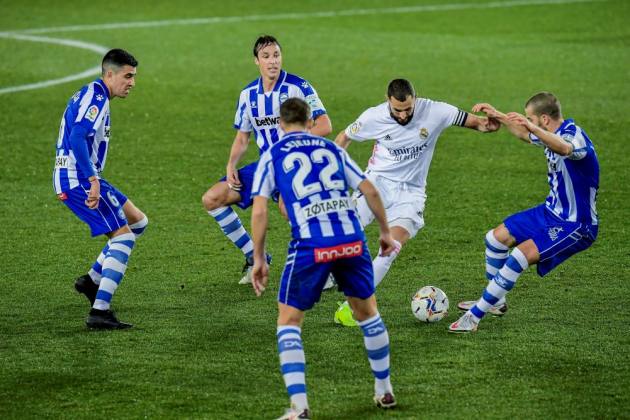 Real Madrid returned to winning ways in style as Karim Benzema and Eden Hazard helped the defending champions to a 4-1 rout over Deportivo Alaves in LaLiga.  (More Football News)

Madrid were in desperate need of a victory after a Supercopa de Espana reverse to Athletic Bilbao and a shock Copa del Rey defeat to lower-tier Alcoyano piled the pressure on Zinedine Zidane, who was absent on Saturday after testing positive for coronavirus.

Atletico Madrid's late victory at Eibar on Thursday had moved them seven points clear in the title race, though Los Blancos never looked in danger of failing to win on the road in LaLiga for a third successive game, Benzema and Hazard putting them in control after Casemiro's opener.

Benzema seemed set to open the scoring when he latched onto Luka Modric's lofted pass, only to be denied first by Fernando Pacheco and then a deflection onto the right-hand upright.

Madrid made the resulting corner count, though, with Casemiro rising high to head home from Toni Kroos' outswinger.

12 - Only @FCBayern has scored more headed goals than @realmadriden in the Top 5 European Leagues in all competitions this season (12 level with @SpursOfficial). Aerial#AlavesRealMadrid pic.twitter.com/kVEV7mWzra

Madrid’s second goal should have followed in the 22nd minute, yet Ferland Mendy failed to tee up Benzema for a simple finish.

Benzema had his goal 19 minutes later, sensationally picking out the top of the net with a wonderful, dipping effort from just inside the penalty box.

Having curled wide earlier on, Hazard made it three on the stroke of half-time with a delicate finish over the onrushing Pacheco.

Madrid are Joselu's favourite LaLiga opponent and the forward netted again when facing the capital club, this time sending a brilliant header beyond Thibaut Courtois.

Alaves' comeback hopes were quashed with 20 minutes remaining, however, when Benzema cut in from the left to thump home and settle the contest.

What does it mean? Benzema v Suarez to settle the title race?

Luis Suarez turns 34 on Sunday; he will be aiming to mark the occasion by continuing his scoring streak when Atleti take on Valencia and reassert Los Rojiblancos' lead over their city rivals, who are so reliant on 33-year-old Benzema at the top end of the pitch.

As it stands, it appears that two of LaLiga's most decorated forwards could make the difference in what is proving to be an intriguing title race, with Barcelona – inspired by a certain 33-year-old superstar of their own – certainly not out of it just yet either.

Benzema and Hazard may have been in sparkling form up top, but the ammunition was provided by the imperious Kroos.

The midfielder created a game-high four chances, including two assists – the second of which was a perfect ball over the top for Hazard – and boasted a supreme 95.7 per cent passing accuracy, completing 90 out of the 94 he attempted during proceedings.

Hazard's mega-money move to Madrid can hardly be called a success, but in the 63 minutes he spent on the pitch the former Chelsea star turned in the type of influential display which led to his arrival in the first place.

After going close in the 28th minute, Hazard got the assist for Benzema's stunner before then lifting in his third goal of the season in all competitions. It is just the second time the 30-year-old has scored and assisted in a game for Madrid.

Madrid host Levante in their next LaLiga outing, which takes place next Saturday, while Alaves face Getafe the following day.

Despite Fractured Thumb, I Was Ready To Bat Against Australia: Ravindra Jadeja