England Vs Germany, Live Streaming: When And Where To Watch UEFA Euro 2020, Round Of 16 Match

England and Germany clash for a place in the quarter-finals of the UEFA Euro 2020. Check match and telecast details 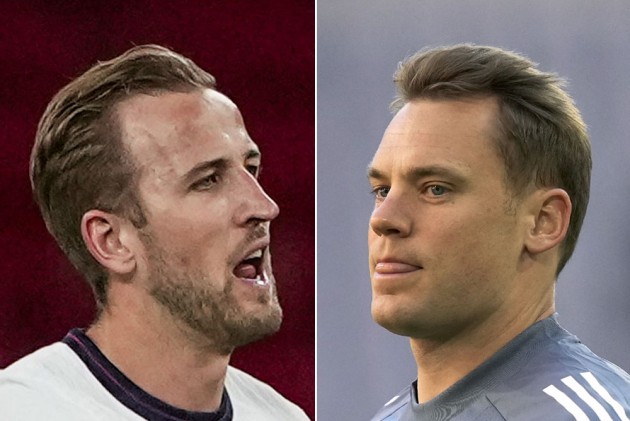 Here we are, again with the latest chapter of the England vs Germany rivalry. The setting is the iconic Wembley Stadium for the penultimate round of 16 clash in UEFA Euro 2020. The winners of the match will take on either Sweden or Ukraine, who meet in Glasgow soon after the end of the London fixture.

Despite their poor record at the national stadium against the Germans, England this time are quietly optimistic, considering how Die Mannschaft have huffed and puffed in the group stage. And as usual, England believe that their 'Three Lions' are indomitable.

England won Group D. They beat Croatia 1-0, then settled for a goalless draw with Scotland. Gareth Southgate's men ended their group engagement with a 1-0 win over the Czech Republic.

Germany finished second in Group F, despite winning only one match (against defending champions Portugal). Joachim Low's men opened their campaign with a 0-1 defeat to world champions France, then played out a nervy 2-2 draw Hungary. Their progression to the round of 16 was only confirmed after the final whistle, having trailed the Magyars twice in a crazy Munich night.

The knock-outs are a different beast though, and their group stage form will hardly matter. But in this particular fixture, history does have a bearing. Regarded as one of the greatest rivalries in international football, an England-Germany match has always lived up to expectations. And players often found themselves unable to cope with the pressure. Take the example of England coach Southgate, who 25 years ago failed to convert his spot-kick against the Germans at Euro 96. People are still talking about it.

It will be a historic match for England. The clash against Germany will be their 300th international match at Wembley, with this their 77th match at the new site since it reopened in 2007. The Three Lions have won 187 times at this venue (D73, L39), and remain unbeaten in their 14 Euros or World Cup finals matches at the home of football (W9, D5). But they face a massive test against the Germans.

For Low, this could be his last match as Germany manager, if they lose. But there is no such worry for Southgate.

Head-to-head: In the 32 previous matches, Germany have won 15, while England were victorious in 13. Four matches have ended in draws. In the last meeting (international friendly) they played out a goalless draw in 2017. The last time they met in a tournament, Germany beat England 4-1 (2010 World Cup). In the last five meetings, stretching back to the 2010 World Cup, England have won only once and lost three times.

This is the third meeting between England and Germany at the European Championship – Germany won 6-5 on penalties following a 1-1 draw in the 1996 semi-final, before England won 1-0 in the group stages at Euro 2000.

This will be the 13th meeting between England and Germany at Wembley Stadium. England won four of the first five such games (L1), including the 1966 World Cup final, but are winless in their last seven against the Germans at the national stadium (D2, L5).

In all major tournaments (Euro and World Cup), England and Germany have met seven times previously. Both sides have won two games each with three draws, though the Germans have progressed via a penalty shootout following two of those draws.

England have never won a European Championship knockout match in 90 minutes (D4, L2) – four games have gone to penalties, with England only progressing once via this method, against Spain at Wembley at Euro 96.

Germany’s Ilkay Gundogan has scored twice at Wembley Stadium, for Borussia Dortmund in the 2013 Champions League final and for Manchester City in the Premier League. He could become just the second player to score at the ground for a club side and the German national team, after Per Mertesacker.