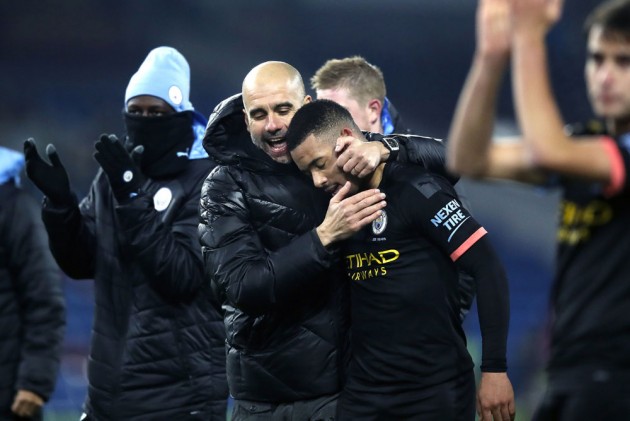 Gabriel Jesus rediscovered form in style as his double helped Manchester City to a 4-1 victory over Burnley that closed the gap on Premier League leaders Liverpool. (More Football News)

Pep Guardiola described last season's 1-0 win at Turf Moor as being like a "trip to the dentist", though Jesus' brace ensured no pain for City this time around.

Thrust into City's line-up in the wake of Sergio Aguero's injury, Jesus scored either side of half-time to put the visitors in complete control, in the process ending his five-match scoreless streak in the league.

Jesus could have rounded off a hat-trick soon after netting his second, though his rare moment of profligacy did not prove costly – Rodri's thunderbolt making sure of the points.

Robbie Brady snatched a consolation for Burnley after Riyad Mahrez had added further gloss for City late on, as the defending champions moved, temporarily at least, into second, eight points shy of Liverpool.

Jesus thought he had flicked City ahead early on after turning in Angelino's strike, but the goal was rightly disallowed for offside.

There was no doubting City's opener, however.

Kevin De Bruyne's charge set City away and, with referee Jonathan Moss allowing play to roll on despite a hefty challenge on the Belgian from Jack Cork, David Silva took charge to supply Jesus. After cutting in on his right, the Brazilian curled a sensational finish into the top-right corner.

Nick Pope denied City a second prior to half-time, though Burnley's goalkeeper was helpless to prevent Jesus brilliantly prodding home Bernardo Silva's cross after the restart.

Jesus looked all set to complete a hat-trick three minutes later but, after an exquisite turn, the youngster failed to apply the finish from a tight angle.

Ashley Barnes' introduction handed Burnley fresh impetus, yet hopes of a comeback were extinguished when Rodri thumped in a venomous first-time strike.

The rout was complete with three minutes remaining – substitute Mahrez drilling in a low effort from the edge of the area for his 50th Premier League goal – before Brady slammed in from close-range to get Burnley on the scoresheet.

What does it mean? Ideal derby prep for City

Denied by Jonjo Shelvey's spectacular strike in Saturday's draw with Newcastle United, City were more ruthless at Turf Moor as they claimed a 10th win of the league campaign.

Now, Guardiola's focus will switch to United, with Ole Gunnar Solskjaer's side visiting the Etihad Stadium on Saturday.

With Aguero injured, Jesus now has the chance to shine for City, though he looked devoid of confidence in the early stages. His first goal was taken with exceptional style and prowess, and his second a brilliant, acrobatic effort.

Ahead of the Manchester derby, Jesus – who has scored eight goals in his last nine starts away from home in the Premier League – looks back to his best.

Guardiola has openly acknowledged how tough his side found the corresponding fixture last term, though Sean Dyche's side were rather easily swatted aside this time around.

It is now two home defeats on the spin for Burnley, and five defeats from their last seven games in total in the league.

- City have won back-to-back top-flight away games against Burnley for the first time since March 1968.

- This was the 36th time that Manchester City have won a Premier League game by three or more goals under Guardiola – the most of any team in the competition since the start of 2016-17 season.

- Guardiola is unbeaten in his nine games against Dyche across all competitions (W8 D1); winning each of the last four in a row.

It is the small matter of the Manchester derby up next for City. Burnley, meanwhile, travel to Tottenham.