Five Talking Points Ahead Of Weekend EPL Actions, Including Arsenal's Bid To Slow Down Manchester United 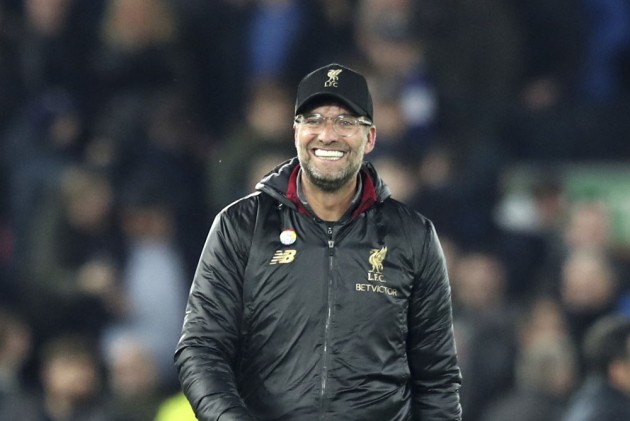 In the latest chapter of one of the most storied rivalries in English football, Arsenal will welcome a resurgent Manchester United as two legendary clubs continue to fight for releavance in the times of City and Liverpool's dominance.

The result from the Emirates meeting could have a major bearing on who secures a coveted Champions League spot for next season.

Throw in third-placed Tottenham Hotspur, now realistically out of the title race, and Chelsea, who are just one point off the fifth place Arsenal, we have one interesting weekend.

We look at some of the main talking points:

Pep Guardiola's City have been installed as favourites to retain their league crown after retaking top spot from a faltering Liverpool, but the picture is more complicated than it seems.

Kevin De Bruyne limped off against Bournemouth last week to compound a miserable season for the Belgian while Fernandinho is also currently out of action.

One good piece of news for Guardiola is that defender Aymeric Laporte returned to training this week, though it is unclear when he will be ready for action.

City are through to the FA Cup quarter-finals and look certain to progress next week to the last eight of the Champions League as they chase an unprecedented quadruple.

But despite the depth and quality of their squad, they need their big players available at the sharp end of the season.

Swiss forward Xherdan Shaqiri made a big impact in the first few months of his career at Liverpool but he appears to have slipped off Jurgen Klopp's radar in recent weeks.

Shaqiri was an unused substitute last week as Liverpool laboured to break down a stubborn Everton defence, drawing 0-0.

"He's a player who can come on and change a game," Aldridge told the Liverpool Echo.

"People are bound to question what's happened there because earlier in the season he was a great option off the bench.

"He's still our fourth top scorer behind the front three. We're not getting goals from all over the place and he would give us another threat." Lethal Lukaku

Romelu Lukaku appeared to be one of the fall guys under Ole Gunnar Solskjaer as the Norwegian interim boss quickly made it clear that Marcus Rashford was his first choice up front.

Critics pointed to a heavy first touch and the fact he was carrying too much bulk.

A nine-game barren run appeared to justify the decision but the Belgian, taking advantage of a spate of injuries to United's forwards, has now turned his season around with six goals in three games.

Lukaku has improved his shot conversion rate under Solskjaer and has given United an extra goal threat, either down the right or in the middle.

The England captain, who missed four Premier League games with an injured ankle, is on 16 goals, level with Aubameyang, one behind Salah and two adrift of Aguero.

With three goals in four games in all competitions since he returned from injury, Kane will fancy his chances against struggling Southampton.

Arsenal have flown under the radar in recent weeks but have quietly been going about their business as they battle for a return to the Champions League after two seasons away from Europe's top table.

Unai Emery's men missed out on returning to the top four after Aubameyang saw his late penalty saved by Hugo Lloris in last week's north London derby draw against Tottenham.

But after their home game against Manchester United on Sunday, the fixture list looks kind, with none of the top six sides left to play.

For all Arsenal's inconsistency this season, the latest wobble a 3-1 Europa League defeat at Rennes, a return to the Champions League next season would be proof of progress in the post-Arsene Wenger era.