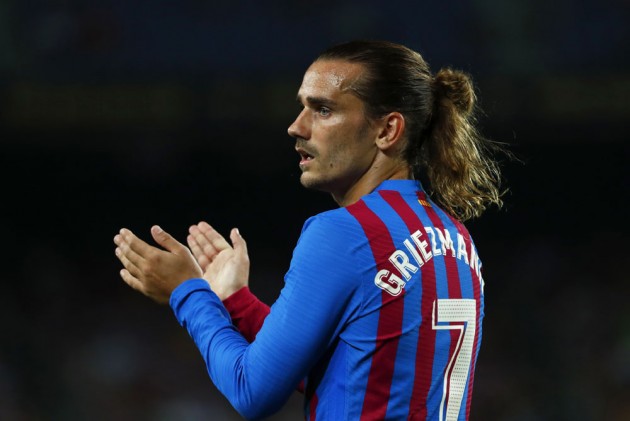 As Barcelona continues adjusting to life without Lionel Messi, Antoine Griezmann gets his best chance yet to take a leading role at the Catalan club. (More Football News)

Griezmann will be making his 101st appearance with Barcelona when the club visits Athletic Bilbao in the second round of the Spanish league on Saturday. The French striker finally has the opportunity to take center stage and become a protagonist in Messi's absence.

“I hope I get to play another 100 games and carry on giving everything to make history with this club,” Griezmann said.

“I want to keep helping the team both on and off the pitch, in attack and defense, and enjoying being at Barça.”

He had some key performances while Messi was still on the team but has never fully met the high expectations that came when he signed from Atlético Madrid for 120 million euros (now $140 million) in 2019, a year after he was the man of the match in the World Cup final won by France.

The 30-year-old Griezmann, who has 35 goals with Barcelona, used to play a secondary role even to Luis Suárez and youngsters such as Ousmane Dembélé and Ansu Fati. At times, he wasn't even a regular starter and had few minutes off the bench.

Now he has the competition of Barcelona's biggest offseason signing, Dutch international Memphis Depay, but coach Ronald Koeman has already hinted they will not be fighting against each other for a starting spot. Koeman said after the preseason that he “liked the connection” between Griezmann and Depay.

Both played well in the team's 4-2 opening victory against Real Sociedad, which marked the start of Barcelona's first season without Messi after 17 years. The Argentina star joined Paris Saint-Germain after Barcelona failed to give him a new contract because of its financial struggles.

Other forwards for Barcelona this season include Sergio Aguero and Martin Braithwaite, who scored twice against Sociedad.

“It was very important to get a win,” said Griezmann, who is 14 goals from equaling Thierry Henry as the club's highest scoring Frenchman.

“It was a good game and hopefully we can now get another win against Athletic.”

Barcelona has won 12 of its last 15 league matches against Athletic, which opened with a 0-0 draw at Elche on Monday.

Real Madrid will also be counting on a French striker when it tries to add to its winning start in a visit to Levante on Sunday. Karim Benzema, the team's top scorer last season, picked up from where he left off and scored twice in the 4-1 win at Alavés on Saturday.

New coach Carlo Ancelotti also saw a good performance by Eden Hazard, who struggled with injuries throughout last season. He will still be missing a few players, including injured veterans Marcelo and Toni Kroos.

Levante was the last team to beat Madrid in the league, winning 2-1 in the Spanish capital in January. Madrid has won only two of its last four league matches against Levante.

Defending champion Atlético Madrid also won its opener, 2-1 at Celta Vigo, and now it hosts Elche with an expected crowd of more than 20,000 at the Wanda Metropolitano Stadium after Spanish health authorities allowed the league to restart with up to 40% of fans in stadiums.

Atlético coach Diego Simeone may have trouble setting up his defense as some players are still recovering from injury and after Mario Hermoso was sent off in the match against Celta.

Suárez, Atlético's leading scorer last season after joining from Barcelona, began on the bench in the opener but is expected to be in the starting lineup on Sunday after having an extra week to regain his best form following the preseason.