Real Madrid got back to winning ways at Huesca, although they were made to fight for it as Raphael Varane scrambled a brace. 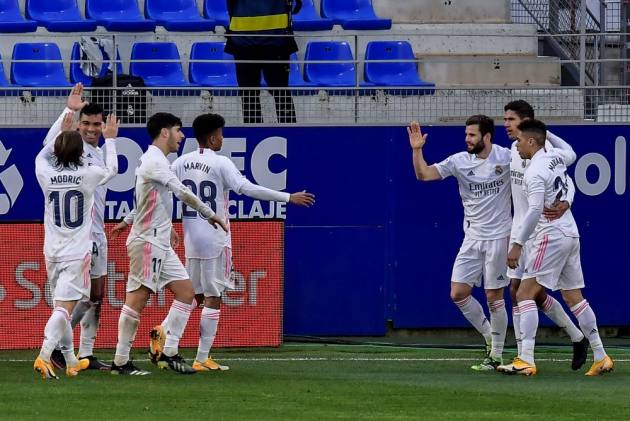 Under-fire head coach Zinedine Zidane looked to rally his players with a defiant media briefing on Friday but they were often lacklustre El Alcoraz, with Javi Galan brilliantly giving Huesca the lead in the midst of a five-minute spell after half-time where they hit the crossbar twice.

Karim Benzema waged an at-times lone battle to get Madrid back into the match and countryman Varane converted the rebound when his 55th-minute free-kick spun up off the crossbar.

Alvaro Fernandez made a string of magnificent saves to frustrate the tireless Benzema, but Varane was on hand six minutes from time to close the gap at the top of the table to seven points - although Atletico Madrid have two games in hand.

Fresh from a hat-trick against Valladolid, Rafa Mir crossed for strike partner Shinji Okazaki to shoot just wide in the second minute before firing into the side netting himself.

Benzema's 20-yard drive skipped off the wet surface and drew a fine save from Fernandez - a chance created by a majestic 35th-minute Luka Modric backheel.

Huesca began the second half as they did the first and Mikel Rico clipped a fabulous half-volley from Pablo Maffeo's cross against the top of the bar.

Madrid did not heed the warning, with Okazaki opening them up down the right flank and crossing for Galan to emphatically lash a bouncing ball into the top corner.

An alarming amount of room remained for Huesca's sweeping attacks and Mir was the latest player to test the crossbar as he stretched to volley Jaime Seoane's raking pass.

The game was starting to look like a duel between two relentless centre-forwards - Thibaut Courtois keeping out a Mir header before Fernandez thwarted Benzema with his boot.

Fernandez knew little when Benzema clattered the ball painfully into his chest from close range, although an acrobatic dive to keep out a left-footed volley from the Frenchman was goalkeeping of the highest order.

Casemiro was similarly unable to head Toni Kroos' cross past Fernandez, but Varane was on hand to pick up the pieces and the points.

What does it mean? Madrid show spirit but not style of champions

Madrid had two wins from six matches in all competitions in 2021 heading into this straightforward game on paper. In the end, they produced the sort of dogged win that has become synonymous with the Zidane years, but the extent to which Huesca extended them suggested this title is Atletico's to run away with.

It was just as well Varane stole the headlines with his poaching heroics, because he was often surrounded by high farce in the Madrid defence. Casemiro and Alvaro Odriozola were each culpable for giving Mir his early opening and the on-loan Wolves striker proceeded to run roughshod over Nacho, whose positive contributions were difficult to spot. Varane made five clearances to his central defensive partner's one.

Benz keeps Zidane on the road

Back when Benzema was an out-of-form third wheel in the 'BBC' forward line alongside Cristiano Ronaldo and Gareth Bale, Zidane defended him to the hilt. He has repaid that faith in spades over the past two seasons and arguably dragged his boss back from the brink on Saturday. He fired off six shots, with four on target - doing everything but get the goal his efforts deserved.

- Varane scored his second brace for Real Madrid in all competitions and his first in LaLiga (also vs Cornella in the Copa del Rey in October 2014).
- Kroos made 82 passes in opposition half against Huesca, the highest tally for a Madrid player in a single away LaLiga game since at least the 2005-06 season.
- Madrid had 18 shots in total, their highest tally in an away LaLiga game since February 2020 (19 vs Levante).
- For the first time in LaLiga this season, Madrid conceded in the second half of a game after reaching half-time at 0-0.
- Madrid won after conceding first in the league for the first time this season, having previously lost to Cadiz and Alaves. They had been the only team yet to concede the opening goal in an away game.

Madrid have back-to-back home games this week against Getafe and Valencia, while Huesca - four points from safety - host Sevilla next weekend.