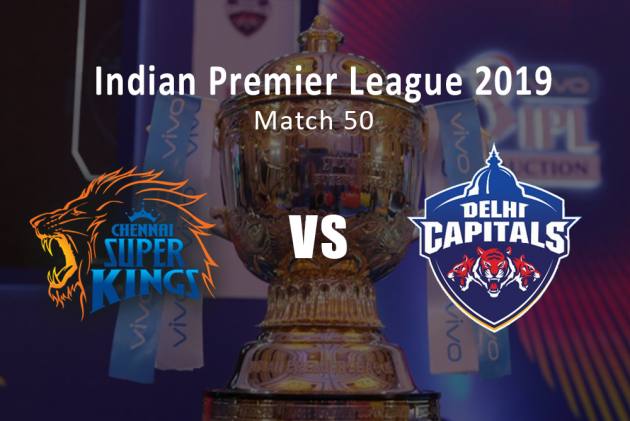 Skipper MS Dhoni's prowess in the slog overs and his lightning-quick stumping were on display yet again while Chennai Super Kings (CSK) spinners bamboozled Delhi Capitals (DC) batsmen in the 50th match of the Indian Premier League (IPL) 2019 at MA Chidambaram Stadium, Chennai. In the battle for top-spot, the defending champions thrashed DC by 80 runs.

It was Suresh Raina who struck a fighting 59 off 37 balls to prepare the road for revival following a slow start and Dhoni (unbeaten 44 off 22) provided the late flourish, ending the innings in style with two sixes off Trent Boult.

After making just 27 runs in Powerplay overs, the hosts eventually put on board a fighting 179 for four and dismissed Capitals for just 99 in 16.2 over to snatch the top spot from the visitors.

IPL 2019: How Five Teams Are Fighting For Two Playoff Spots

DC suffered a surprise batting collapse after being consistent this season. They were out of the game after losing half the batsmen by 11th over and ended up suffering their worst defeat. It was also their lowest total of the season.

CSK, who now sit atop the table with 18 points, are now sure to end in top-2, ensuring that they will have two shots at making the summit clash.

Mumbai Indians are only team which can displace DC (16 points) from second place if they win their next two games and Delhi lose their last.

Man of the match: MS Dhoni

10:54 PM IST: Ravindra Jadeja on with his third over and he had Chris Morris stumped off the fourth ball. A masterclass from MS Dhoni behind the wicket. He leaves the batsman's foot hanging in the air. And in a similar fashion, Dhoni does it again, to send Shreyas Iyer back. Two wickets and two runs from the over. FoW-85/8 after 12 overs. Iyer made 44 off 31.

10:47 PM IST: Two wickets from Imran Tahir's second over. Axar Patel off the second ball, caught at slip by Shane Watson and Sherfane Rutherford off the last ball, caught at cover by Deepak Chahar. Three runs from the over. DC-83/6 after 11 overs. Chris Morris is the new man. They need 97 runs from 54 balls.

10:38 PM IST: Dwayne Bravo gets his first over. A four off the first over, hit by Axar Patel past backward point. And four more singles. Eight runs from the over. DC-75/4 after nine overs. They need 105 runs from 66 balls. Time out.

10:26 PM IST: What a wastage! Rishabh Pan hits Imran Tahir for a four to extra cover. Sublime timing, then throws his wicket the next ball, going for the maximum. Dwayne Bravo takes the catch at long-off. FoW-63/3 (6.2 Over). Colin Ingram is the new man. Six runs from the over. DC-65/3 after seven overs. They need 115 runs from 78 balls.

10:16 PM IST: Deepak Chahar on with his third over. 15 runs from the over. Shreyas Iyer hits the first ball for a six over mid-off boundary, then a four off the fifth ball, played over short third man. DD-49/1 after five overs.

10:11 PM IST: Very good over for Delhi. Shikhar Dhawan hits Harbhajan Singh for a six, off the second ball over long on and a four off the fifth ball through cover. 13 runs from the over. DC-34/1 after four overs. They need 146 runs.

10:07 PM IST: Deepak Chahar on with his second over. Shreyas Iyer hits the second ball for a four to deep backward point. Nine runs from the over. DC-21/1 after three overs. They need 159 runs.

9:59 PM IST: What a start for Chennai Super Kings. Prithvi Shaw smokes the fifth ball, but hits it straight to Suresh Raina at cover point. FoW-4/1 (0.5 Over). Shreyas Iyer is the new man and hits the last ball of the over for a foure to fine leg. Still a good first over from Deepak Chahar. Eight runs.

9:44 PM IST: CSK scored 77 for one wicket in the last five overs, and compare it to their first five, 17/1. That's Dhoni differential.

9:40 PM IST: Trent Boult on with the last over. One eventful final over. MS Dhoni hits the third ball for a four, straight over the bowler's head. Then, hits the fifth ball for a six, over deep mid-wicket and another, over backward square leg. 21 from the over. Dhoni unbeaten on 44 off 22, and he was supposed to be sick. CSK-179/4.

9:33 PM IST: MS Dhoni hits the first ball for a four to fine leg. A single then, Chris Morris takes a very good caught and bowled to send Ravindra Jadeja (25 off 10) back. FoW-145/4 (18.3 Over). Ambati Rayudu, the new man, hits the fourth ball for a four to dee midwicket. A single, and a sis off the no-ball. Dhoni only needed to guide the ball over fine leg and the bowler apologises to Dhoni. That was going for the head. A single off the free-hit. 18 runs from the over. CSK-158/4 after 19 overs. Morris' figures: 1/47.

9:26 PM IST: Trent Boult returns for his third over. 14 runs from it, including a four off the second ball, hit by MS Dhoni to fine leg. Ravindra Jadeja hits the last ball for a huge six, over long-on. CSK-140/3 after 18 overs.

9:21 PM IST: Chris Morris returns for his third over. Ten runs from it. A four off the third ball, hit by MS Dhoni top fine leg boundary, then another one, hit by Ravindra Jadeja to third man. CSK-126/3 after 17 overs.

9:16 PM IST: Axar Patel unlucky not to get the wicket of adventurous Ravindra Jadeja. First, Jadeja gets a six, parried over the boundary at deep backward square by a running Rutherford, then a four, beating a diving Rishabh Pant. Thick edge. 14 runs from the over. CSK-116/3 after 16 overs.

9:03 PM IST: Faf du Plessis hits the second ball of the over for a six, straight over the bowler's head. But Axar Patel hits back in style. He had the South African caught at long on by Shikhar Dhawan. FoW-87/2 (13.3 Over). Faf made 39 off 41 balls. New man MS Dhoni survives a very quick stumping from Rishabh Pant. Seven runs from the over. CSK-88/2 after 14 overs.

8:58 PM IST: 12 runs from Sherfane Rutherford's second over, including a six off the third ball, hit by Faf du Plessis over extra cover. CSK-81/1 after 13 overs.

8:49 PM IST: Sherfane Rutherford gets his first over. Eight runs from the over. Fiver singles, a double and a wide. CSK-61/1 after 11 overs.

8:37 PM IST: Chris Morris returns for his second over. A dot off the first ball and a vintage Suresh Raina hits the second for a straight four, over the bowler's head. Faf du Plessis hits the fifth ball for a four to fine leg. Nine runs from the over. CSK-50/1 after nine overs. Time out.

8:29 PM IST: Jagadeesha Suchith on with his third over. Nine runs from it, including a four off the first ball, hit by Suresh Raina to long-off. CSK-36/1 after seven overs.

8:25 PM IST: Very quick over from Axar Patel. And some runs for Chennai. Suresh Raina hits the fourth and fifth balls for fours. Ten runs from the over. CSK-27/1 after six overs.

8:22 PM IST: A better over for Chennai. Chris Morris gets his first over. A dot to Faf du Plessis, and first boundary of the match. A low full toss and Faf plays it fine to fine leg. Then a dot and a wide. A four to third man, hit by Suresh Raina, to end the over. CSK-17/1 after five overs.

8:16 PM IST: Jagadeesha Suchith continues with his second over. Faf du Plessis takes a single off the first ball, then the wicket of Shane Watson. The Aussie, having blocked eight balls for nothing, plays a lofted shot only to pick the lone fielder manning the mid-wicket boundary. Caught by Axar Patel. FoW-4/1 (3.2 Over). Suresh Raina is the new man. Four runs from the over. Seems like CSK are playing a different format of cricket. CSK-7/1 after four overs.

8:11 PM IST: Trent Boult continues with his second over. Another brilliant over from the Kiwi left-arm pacer. Just a single, off the third ball to Faf du Plessis. CSK-3/0 after three overs. Shane Watson has a big zero off eight balls.

8:08 PM IST: Jagadeesha Suchith, left-arm spinner, gets on with the second over. Just one single from the over, off the second ball to Faf du Plessis. CSK-2/0 after two overs.

7:50 PM IST: Delhi will miss the services of pacers Kagiso Rabada and Ishant Sharma, especially the South African. He has a back issue, while Ishant is having an ankle niggle. CSK are back to full strength. Ravindra Jadeja is back, along with Faf du Plessis.

For many, it will be considered a dead rubber with both Chennai Super Kings and Delhi Capitals already in the IPL 2019 playoffs. But this top of the table clash has all the makings of a drama-fille thriller. First, it will a battle for the top spot, then there's a looming threat of 'Cyclone Fani'. The focus will also bee on MS Dhoni, who's not well.

Their net run-rate slipping into negative after a defeat against Mumbai Indians (MI), defending champions CSK will be keen to get back to No 1 spot when they take on current table-toppers DC.

An interesting contest is on the cards between two current top teams and a win for either side will help it consolidate the position and ultimately could have a bearing on where it finishes in the final standings.

Dhoni-less CSK went down rather tamely to MI in their last game, which saw their net run-rate falling. Now with just two games left in the league stage, CSK will look to roar back with victories to seal a spot in the top two and get the home comfort in Qualifier 1.

Without his inspiring presence, CSK's batting collapsed against MI and they lost the game by 46 runs to surrender their position at the top of the points table to Delhi.

With 16 points from 12 games, CSK will be hoping that their talismanic captain recovers from the bout of fever, which forced him to sit out the MI fixture and be ready to feature in the last home match of the league phase.

Also, the home team will be expecting influential all-rounder Ravindra Jadeja to be back in the mix too.

DC, on the other hand, would be high on confidence having posted four wins in their last five matches.

Young Shreyas Iyer has done a good job of leading the team, which also has 16 points from 12 games, and has scored important runs.

He will be keen to put on some valuable runs on board against the formidable CSK and would also expect Shikhar Dhawan, Prithvi Shaw and Rishabh Pant to find ways to score on a sluggish Chepauk track.

It will be fascinating to see how the league's top wicket-taker Kagiso Rabada does on CSK's home turf, traditionally known to offer help to slow bowlers.

The spin-heavy CSK led by Imran Tahir and Harbhajan Singh could prove quite a handful for Dhawan & Co. and how they cope with that would determine the game's outcome, as would the Delhi tweakers performance.