Chasing 150, RCB rode on a 69-run third-wicket partnership between Glenn Maxwell and Srikar Bharat to reach 153 for 3 in 17.1 overs. 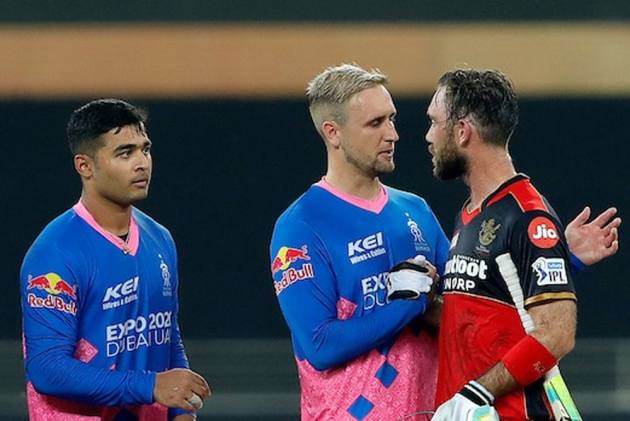 Royal Challengers Bangalore dished out a clinical display with both bat and ball to record a comprehensive seven-wicket victory over Rajasthan Royals in the Indian Premier League here on Wednesday, boosting their prospects of a top-two finish.

Chasing 150, RCB completed the task with as many as 17 balls to spare.

Star all-rounder Glenn Maxwell blazed away to an unbeaten 50 off just 30 balls, while Srikar Bharat played sensibly for his 44 off 35 deliveries.

RCB needed 71 runs in the back 10 after the RR bowlers checked the flow of runs following the dismissals of Virat Kohli (25) and Devdutt Padikkal (22).

Kohli and Padikkal gave the team a brisk start as RCB scored nine runs per over in the power play.

The Indian captain got three boundaries in the first over though he was lucky with the first one that flew over the slip cordon off a leading edge.

However, both got out after settling down with Kohli falling to a fine direct hit by Riyan Parag after he had made a diving stop.

Earlier, RCB staged an excellent comeback as Rajasthan Royals blew away a blistering start to finish at 149 for nine.

Left-arm spinner Shahbaz Ahmed (2/10) and leg-break bowler Yuzvendra Chahal (2/18) triggered the slide after RR were cruising at 100 for one in the 11th over.

Pacer Harshal Patel (3/34) came close to picking a hat-trick in successive matches, in the final over, but Kartik Tyagi denied him that as RR lost eight wickets for 49 runs.

Evin Lewis top-scored with 58 off 37 balls, but he was guilty of throwing away his wicket at a crucial juncture, and so was skipper Sanju Samson (19), whose adventurism did not help his team.

From eight for two in two overs, RR were cruising at 39 for no loss at the end of fourth before racing past the fifty-run mark in the next over, with Lewis being the aggressor.

Jaiswal played the day's first scoring shot when he hit Mohammed Siraj through the cover and in the next over, he clobbered Glenn Maxwell for a huge six over long on.

Lewis took over after that, smashing debutant English left-arm pacer George Garton for two sixes and a four as RR picked 18 off the over.

Garton was coming back into the attack after being strangely taken off despite a very economical first over.

Lewis hammered another six and a four against Harshal Patel, as RR crossed the fifty in the fifth over.

India pacer Siraj came back to bowl a tight sixth over but Jaiswal got two boundaries off Daniel Christian to record RR's best opening partnership of the ongoing season, even as Kohli kept switching his bowlers frequently.

Maxwell kept things tight in the next over, giving away just four runs, before Jaiswal smoked Christian for a maximum over extra cover.

However, Christian had the last laugh as Jaiswal mistimed and failed to clear Siraj at mid off.

It swung a bit early on but the fast bowlers didn't get much purchase from the pitch as the innings progressed.

Lewis continued in same vein and hit Harshal Patel for two successive fours before in-form skipper Sanju Samson went inside out to clobber leg-spinner Yuzvendra Chahal over extra over for a six.

Garton, who was taken to the task by Lewis in his second over, came back strongly to exact revenge when he had the big-hitter from Trinidad sky one for wicketkeeper Bharat Srikar to complete a high catch.

Samson pulled Garton over deep square leg for a six but RR lost the plot after that, the slide starting with the wicket of Mahipal Lomror off Chahal.