Jose Mourinho struggled to explain the loss of a three-goal lead that saw Tottenham held to a draw by West Ham as he simply declared: "Football happened" 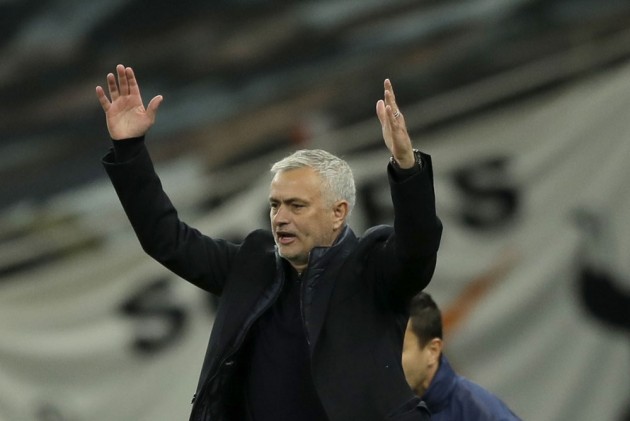 Jose Mourinho struggled to explain the loss of a three-goal lead that saw Tottenham held to a draw by West Ham on Sunday as he simply declared: "Football happened".  (More Football News)

Spurs raced into their earliest three-goal lead since Derby County were put to the sword inside 14 minutes in August 2007, Son Heung-min opening the scoring and Harry Kane netting twice with just 16 minutes gone in north London.

And the hosts held onto that advantage up until the 82nd minute, when Fabian Balbuena headed in a set-piece to kickstart the most unlikely of comebacks from David Moyes' men.

It was quickly followed by a Davinson Sanchez own goal before Manuel Lanzini netted in stunning fashion in the fourth and final minute of injury time to level things up.

Lanzini's goal ensured West Ham became the first team in Premier League history to avoid defeat in a game having trailed by three or more goals as late as the 81st minute.

Asked in his post-match interview with Sky Sports to explain what had transpired, Mourinho replied: "Football

"Of course, I have to analyse the second half and I have to do it internally, but for you I prefer just to say that football happened, and I prefer to praise West Ham's belief.

"It is not easy to be losing 3-0 and to be dominated, let's say, because we had the game under control. It's not easy to keep the belief.

"I knew they were completely different team this season than they were last season, so I give them credit.

"But, of course, to concede three goals – and to lose an advantage of three goals – is a big punishment and, eventually, deserved."

87 - Tottenham Hotspur had won each of their previous 87 Premier League matches when leading by at least three goals, last dropping points from this position in a 3-5 defeat against Man Utd in September 2001. Despair. #TOTWHU

Tottenham had exercised complete control over their London rivals in the first half but Mourinho revealed that he warned his players that the game was far from over at the break.

The Portuguese highlighted Tomas Soucek, who he termed the "new Fellaini" in tribute to his former Manchester United charge Marouane, as a particular threat for the Hammers.

He added: "I told them to keep the same and be aware of a lot of set-pieces that we had against us, corners and lateral free-kicks where we knew they were very strong. They are a team with huge guys and very powerful in the air.

"David found in Soucek his new Fellaini, he has lots of aerial power. In the end they were lucky, but they fought very hard to be lucky. In the end, I praise them.

"This was a game that was in the pocket and we lost two points."

Gareth Bale made his first appearance for Spurs in seven years and 152 days when he came off the bench late on.

But the Welshman's failure to take a golden opportunity for a fourth, decisive goal and a further near miss from Kane were cited as key moments by Mourinho.

"We had Harry Kane to score the fourth when he hit the post, we had Gareth to kill the game with his action also," Mourinho said.

"The game was more with the space they were giving us, more to the fourth goal than anything. But that is football and we were punished.

"With [substitute Harry] Winks, the team found balance again, they were in control of the game again having lost it a little bit early in the second half. It was exactly when we were in control that we conceded the first goal, then after that, their belief went up and probably my guys were not strong enough to cope with it psychologically.

"The clock was ticking – we knew that – and in the last few seconds we lost two points."