Memphis Depay and Luuk de Jong scored a goal each for Barcelona as the Catalan giants won 3-0 and moved one place up to sixth. 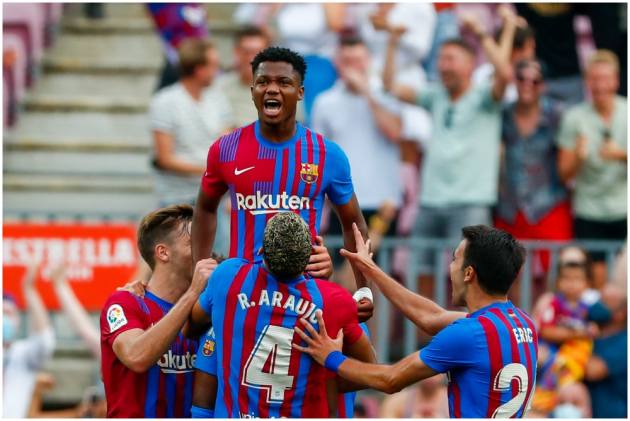 Wearing the No. 10 jersey that used to belong to Lionel Messi, Ansu Fati made a triumphant return from a long injury layoff on Sunday, scoring a goal and giving Barcelona fans hope for the future. (More Football News)

Fati, who hadn’t played in more than 10 months because of a knee injury, scored in stoppage time to seal a 3-0 La Liga win over Levante that helped ease some of the pressure on Barcelona following a three-match winless streak.

The 18-year-old Fati was loudly cheered by the crowd at the Camp Nou Stadium when he entered the match in the 81st minute, then profusely celebrated after scoring with a low shot from outside the area.

He has been one of Barcelona’s most promising stars and is seen by many as a player who can help the Catalan club overcome Messi’s painful departure to Paris Saint-Germain.

It was Fati’s 14th goal in 44 matches with Barcelona, and his first since the ‘clasico’ against Real Madrid at Camp Nou last October. He ran near the stands after the goal to thank his relatives. “I’m thankful to everyone in my family who suffered during all these months,” he said.

“I’m thankful to everyone at the club and to the fans. They’ve all supported me greatly.”
Fati’s initial recovery time from his left knee injury was about four months but there were several setbacks in the recovery process and he needed four surgeries to fully heal.

Fati debuted with the first team in 2019 as a 16-year-old. He eventually became the youngest scorer for Barcelona and for Spain’s national team.

Memphis Depay and Luuk de Jong had each scored in the first 15 minutes of the match to put Barcelona on its way to its first victory since the demoralizing 3-0 home loss to Bayern Munich in the Champions League two weeks ago.

The team had been in turmoil since then, with coach Ronald Koeman under pressure and at odds with club president Joan Laporta and even some of his players for saying that the club would not realistically fight for titles this season.

Koeman was not sitting on the bench on Sunday after being handed a two-game ban for complaining to the referee in the team’s home draw against Granada last week. He will also miss next weekend’s match at defending champion Atlético Madrid.

The victory moved Barcelona to fifth place, five points behind leader Real Madrid with a game in hand. Madrid was held by Villarreal to a scoreless draw at home on Saturday after four straight league wins.

Memphis, who hadn’t found the net for Barcelona since the third round, opened the scoring by converting a penalty kick in the sixth minute after he was fouled. De Jong added to the lead from close range after a pass by Sergino Dest in the 14th for his first goal with Barcelona since joining from Sevilla this season.

Levante remain winless after seven matches, with four draws and three losses. Granada and Getafe are the only other teams without a win so far this season.

Javi Martínez scored an 88th-minnute winner as Osasuna beat Mallorca 3-2 for its second win in three matches. All three of Osasuna’s victories this season have come in away matches. It was the second consecutive defeat for Mallorca, which was coming off a 6-1 rout at Madrid. The promoted club hasn’t won since picking up its second victory in the third round.