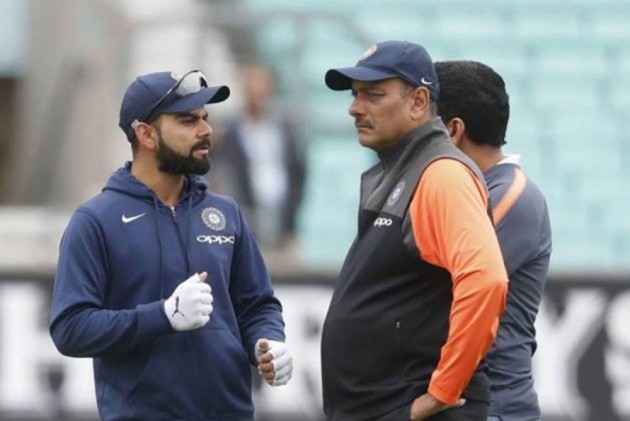 The cancellation of the fifth Test between India and England at Old Trafford, Manchester on Friday due to a COVID-19 outbreak in the visitors' camp has led to questions being raised over head coach Ravi Shastri's book release function in London where health safety protocols went for a toss. (More Cricket News)

It was after that book release event at a five-star facility ahead of the fourth Test that Shastri along with bowling coach Bharat Arun, fielding coach R Sridhar and physio Nitin Patel tested positive. All of them were fully vaccinated.

However, things took a turn for the worst when assistant physio Yogesh Parmar was found positive and apprehensive Indian team decided against taking the field in the match which was called off two hours before toss.

Indian captain Virat Kohli and his teammates were present at the function where outside guests were also allowed and most of them were unmasked owing to relaxation of rules across the United Kingdom.

It is learnt that neither Shastri nor Kohli took any written permission from the BCCI on attending the function at the team hotel.

"No permission was sought either from president (Sourav Ganguly) or from the secretary (Jay Shah). Perhaps they might have thought that since health safety rules have been relaxed in the UK, they didn't need permission," a senior BCCI official, privy to the developments, told PTI on conditions of anonymity.

This brings into focus, the role of team's administrative manager Girish Dongre, whose job is to ensure that all paper work and necessary protocols are in place for events like these.

"There is very little chance that Shastri and Kohli will be penalised for this act of theirs with the T20 World Cup around the corner (in October). Also Shastri is leaving for good after that.

"Kohli is the captain. May be a rap on the knuckles at best. May be it's good time to ask Dongre that what's his domain of work as an administrative manager," the official said.

It is now an open secret that skipper Virat Kohli led the players in their demand for cancellation of the match and they were successful in having their way after several rounds of talks with BCCI brass as well as England Cricket Board Chief Executive Tom Harrison who tried to convince a "visibly scared Indian skipper".

Kohli, however, would just not relent.

"The BCCI wanted them to play but such were the anxiety levels among some notable senior players that both boards were concerned about their mental health. One can understand that they were scared of another 10-day isolation and bubble life," the official said.

"But the point here is that why didn't they apply common sense when they agreed to attend Shastri's book launch where outsiders were allowed?" he asked.

That event is now being seen as a super spreader affecting four support staff members apart from Shastri.

So the question that is now being asked in the BCCI corridors is whether secretary Jay Shah's letter asking the team to avoid crowds after Rishabh Pant tested positive during the break after the World Test Championship final, was at all taken seriously?

In that particular letter, Shah had asked the players not to attend crowded events like the Wimbledon and the European Cup football, where some of the members of the contingent were seen.

"Yes, there has been relaxation in the UK but they could have avoided this gathering of outsiders. These people attended social gatherings and then when there was a case, they got scared," he said.