The France center back's move to United from Real Madrid for a reported fee of about USD 56 million was finalized on Saturday. He has signed a four-year contract 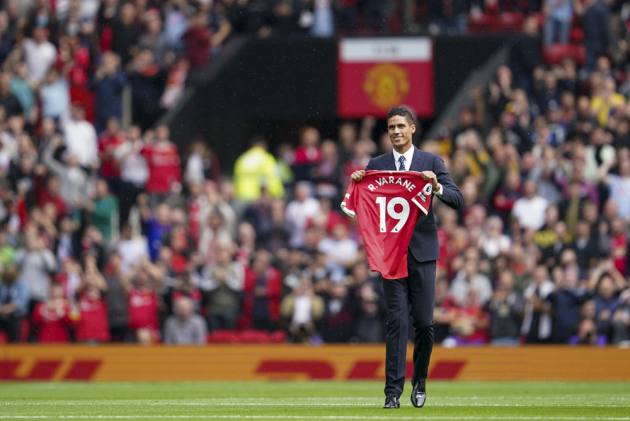 Finally a Manchester United player, Raphael Varane walked out in front of a full house at Old Trafford, holding up a team jersey. (More Football News)

Stopping in the center circle, Varane took out his phone and took a selfie to huge cheers from the crowd.

The France center back's move to United from Real Madrid for a reported fee of about USD 56 million was finalized on Saturday. He has signed a four-year contract.

Varane was presented to the United fans ahead of the team's opening game of the Premier League season, against fierce rival Leeds.

The 28-year-old spent 10 seasons at Madrid and helped the club win 18 trophies, including four Champions League titles. He also was a key member of the France team that won the 2018 World Cup. He joined Real Madrid in 2011 from French club Lens.

"Manchester United is one of the most iconic clubs in world football and the chance to come here and play in the Premier League is something I couldn’t turn down," Varane said in a statement.

"There is a lot more that I want to achieve in my career and I know I'm joining a squad full of great players who will all have the same determination to win matches and trophies. Having spoken to the manager I can see how much progress has been made over the last few seasons and I now join a group ready to play at the highest level."

The deal comes almost two weeks after United signed Jadon Sancho, with the club paying Borussia Dortmund a fee of 85 million euros (USD 100 million) for the 21-year-old England winger. Sancho was on the bench against Leeds.

United also has extended manager Ole Gunnar Solskjaer's contract this summer as the team looks to improve upon their second-place finish in the league last season.

"I'm absolutely delighted that we have managed to secure one of the best defenders in the world over the last 10 years," Solskjaer said of Varane.

"Raphael is a proven winner who we have tracked over a long period of time and we know just how much of a dedicated professional he is.

"We have great depth of international defenders and he will add his immense skill set and leadership to that group. He is a unique defender with a rare combination of top-level attributes that I know will rub off on our younger players. He has won everything there is to win but I know that he is still determined to succeed."

Varane is likely to replace Victor Lindelof in the team and play alongside Harry Maguire at the heart of United's defense. His debut could come when United plays Southampton next weekend.

United ended the season without silverware after losing the Europa League final to Villarreal on penalties. It's the longest drought for United since the 1980s, in the early days of Alex Ferguson's otherwise trophy-filled reign.

United last won the Premier League title in the 2012-13 season and since then has watched crosstown rival Manchester City lift the trophy four times, including last season.