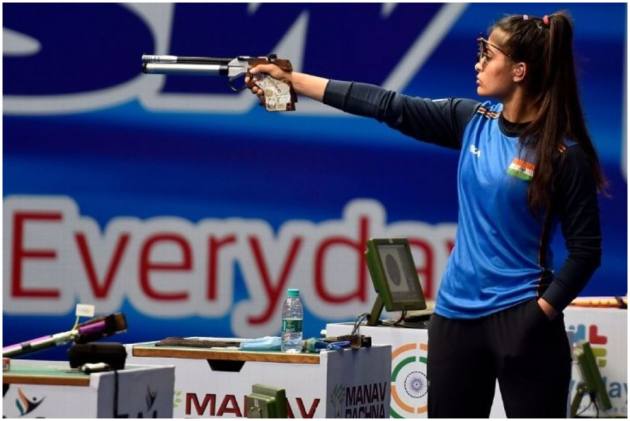 Indian shooters made merry on the third day of the  ISSF Junior World Championship in Lima on Saturday as they won four gold medals including two from teen sensation Manu Bhaker. this was Manu Bhaker's third gold in the tournament. (Other Sports News)

After her individual title, Manu Bhaker partnered with Sarabjot Singh to win the 10m air pistol mixed team event. She then teamed up with youngsters Rhythm Sangwan and Shikha Narwal in the air pistol women’s team event to win her third gold medal in the competition.

The troika of Srikanth Dhanush, Rajpreet Singh and Paarth Makhija picked up the men’s 10m air rifle team title.  In the last event of the day, Sarabjot added another gold to his tally with Naveen and Shiva Narwal to bag the title in air pistol men’s team event.

On Friday, the Indian shooters had claimed a gold in the women’s skeet team event and a bronze in the men's team finals. The trio of Areeba Khan, Raiza Dhillon and Ganemat Sekhon had finished at the top of the podium in the women’s event after shooting an aggregate score of 6.

In the men’s section, the Indian team of Rajveer Gill, Ayush Rudraraju and Abhay Singh Sekhon had won the bronze medal after prevailing over Turkey’s Ali Can Arabaci, Ahmet Baran and Muhammet Seyhun Kaya 6-0.

On Saturday, Manu and Sarabjot led an India 1-2 in the air pistol mixed team competition where they fought off the challenge of the second Indian pair of Shikha Narwal and Naveen 16-12 in the gold medal match.

Earlier in the qualification round featuring eight teams, both the Indian pairs finished 1-2 as well with Manu and Sarabjot shooting 386 while Shikha and Naveen were a point behind with 385.

In the junior men’s 10m air rifle team event, the trio of Srikanth, Rajpreet and Paarth had also made it to the gold medal match by virtue of topping their six-team qualification round with a combined total of 1886.9. Each shooter shot 60-shots each in the qualification round.

In the final, they beat a strong US team comprising reigning Olympic champion William Shaner, besides Rylan Kissel and John Blanton by a margin of 16-6.

India also picked up another silver medal on the day when the pair of Rajpreet Singh and Atmika Gupta went down fighting to USA’s William Shaner and Mary Carolyn Tucker in the 10m air rifle mixed team competition by a margin of 15-17.

Rajpreet and Atmika had finished second behind US pair in qualification as well with a combined 418.5 after 20-shots each. The US pair shot 419.9 to top the eight-team field.

In the air rifle junior women’s team final, it was another silver medal for India. Atmika Gupta, Zeena Khitta and Nisha Kanwar lost a thrilling final against Hungary. The Indians trailed 10-14, fought back to 14-14 and missed gold by 0.1 in the final series.

In the air pistol, junior women’s team final, Bhaker shouldered the responsibility of carrying the team through in a low-scoring affair. Sangwan too came up with some crucial shots while Narwal had a tough time before finally shooting a gold clinching 10.8 against a young Belarus team. The Indians won this match 16-12.

India are leading the medal tally with six gold, five silver and two bronze for a total of 11 medals.