Exiled from Arsenal's first-team squad this season, Mesut Ozil has completed a transfer to Fenerbahce in Turkey 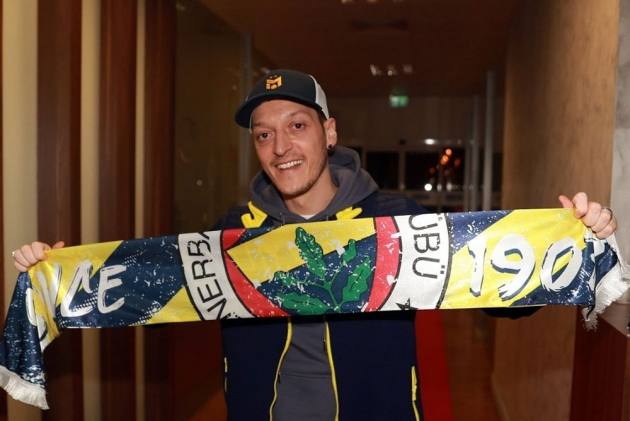 Mesut Ozil has completed a move to Fenerbahce after negotiating his departure from Arsenal. (More Football News)

World Cup winner Ozil, once Arsenal's record signing, had been excluded from Mikel Arteta's first-team plans this season and departs after seven and a half years with the Premier League club.

The former Germany midfielder was under contract until the end of the current campaign but reached an agreement for an early termination, clearing him to sign elsewhere.

Fener have now confirmed the arrival of Ozil, with Arsenal announcing the playmaker's departure on their official website.

In a statement in the Gunners' announcement, Ozil said: "I'd like to thank the club for this amazing journey over the past seven-and-a-half years.

"The support I have felt from the team and fans during my time here has been truly incredible and something I will always be grateful for.

"Together we won trophies for the first time in years and created memories that will last a lifetime.

"The Arsenal fans will forever remain in my heart. I'd like to thank Edu Gaspar for helping bring about a professional and dignified solution in the past few days, and I wish everyone at the club the best in their attempt to continue to bring Arsenal back to the top, where we belong."

An agreement has been reached with Arsenal Football Club for the transfer of professional footballer Mesut Özil to our club. pic.twitter.com/sZav3YsTBC

Having joined from Real Madrid in September 2013, Ozil made 184 Premier League appearances for Arsenal, scoring 33 goals and contributing 54 assists.

However, the 32-year-old had increasingly become a peripheral figure in recent years, initially under former Gunners boss Unai Emery before being left out entirely by Arteta.

His final Arsenal appearance came on March 3, 2020, when he played 89 minutes in a 1-0 win over West Ham at Emirates Stadium.

Although he was twice named on the bench when the 2019-20 season resumed after the coronavirus-enforced break, the 32-year-old was an unused substitute against both Brighton and Hove Albion and Southampton in June.

"Mesut's achievements at Arsenal are undisputed," Arteta said. "It was a privilege to play alongside him and, more recently, coach him.

"His creativity and vision led to many goals during his time in the Arsenal shirt. Mesut was at the heart of many great moments for this club over the years, including those three FA Cup final wins.

"These successes will always be part of our history. We thank Mesut and wish him all the best with Fenerbahce."