A lacklustre Manchester United suffered a humiliating defeat against Liverpool at Old Trafford in their Premier League match. 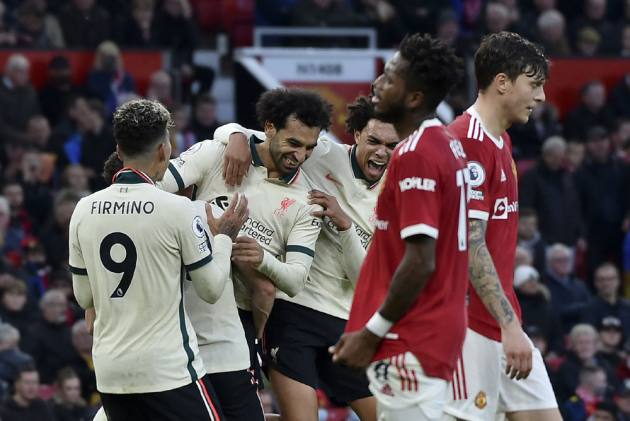 The one-sided English Premier League game also witnessed Mohamed Salah hitting a hat-trick even as Cristiano Ronaldo escaped a red card for kicking Curtis Jones. But Ronaldo's team-mate Paul Pogba, who came in as a sub, wasn't so lucky.

Naby Keita opened the scoring as early as the fifth minute from a Salah set-up, then Diogo Jota made it 2-0 for Jurgen Klopp's 'Whites' in the 13th minute. The Portuguese was unmarked and had no trouble slotting home a Trent Alexander-Arnold delivery.

Salah then made it 3-0 in the 38th minute with a poacher's finish from a close range. The Egyptian thus scored for the 10th successive game.

Ronaldo was denied by Alisson Becker in the injury time, and in the following play, the legend kicked Jones. A booking was all that the referee could summon. Seconds later, Salah produced a stunning left-footed drive to beat David De Gea to the left. And it was 4-0 at half-time as a stunned Ole Gunnar Solskjaer looked on. Unmoved and vilified in silence.

Soon after the restart, Salah completed his hat-trick with a fine finish in the 50th minute, this time on the run, from a brilliant through ball from Jordan Henderson. In the process, Salah also became the top-scoring African in Premier League history with 107 goals.

A couple of minutes later, Ronaldo curled one to beat Alisson. But VAR ruled it out for off-side, with the replay showing Marcus Rashford's flailing foot on the red line.

Then, Pogba who just arrived as a sub for Mason Greenwood, lunged on Keita, leaving the Liverpool midfielder on the ground. After an initial yellow card, the Frenchman was shown a straight red at the hour mark.

Scott McTominay came close to scoring a goal in the 82nd minute, but was denied by the woodwork. Not even a consolation goal for the United as they suffered back-to-back defeats at the home front. It was also their third defeat in fur games. They are seventh now in the table.

Liverpool remained the only unbeaten team in England's top-flight league after the end of the ninth round, but they still trail Chelsea by a single point at the top.