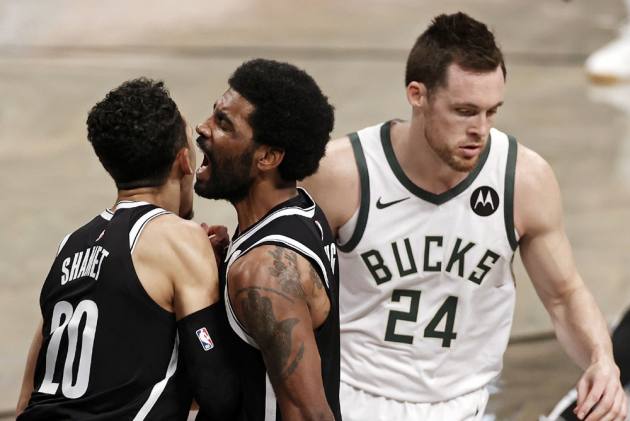 The Brooklyn Nets overcame the early loss of James Harden to injury to win Game 1 of their Conference semi-final series against the Milwaukee Bucks 115-107 on Saturday. (More Sports News)

Harden left the court after only 43 seconds after re-injuring his right hamstring, but Kevin Durant and Kyrie Irving stepped up in his absence, along with Blake Griffin who had a throwback game.

Durant finished with 29 points, 10 rebounds and two blocks while Irving had 25 points and eight assists including 20 points in the first half but it was a collective effort on both defense and offense for the Nets.

Griffin made four three-pointers, totalling 18 points and 14 rebounds, the latter being a season-high for him since joining the Nets.

In contrast, the Bucks struggled from beyond the arc, shooting six from 30 with the main culprits being Jrue Holiday with two from seven and Khris Middleton who shot none from five.

At one stage in the first half, Milwaukee missed 11 consecutive three-point attempts to leave them playing catch up.

The Nets edged ahead in the first half where the Bucks rallied to finish the second quarter with a 14-3 stretch to trail by two points at the long break.

But Durant lifted Brooklyn in the third quarter, as the Nets piled on 35 points to open up a sizeable 14-point lead at the final change.

While the Bucks struggled from range, the Nets shot 15 from 40 beyond the arc, going at 37.5 per cent led by Joe Harris who made five from nine.

The series continues on Monday at Brooklyn's Barclays Center although the Nets will be sweating on Harden's status.