On This Day In 2005: Argentina Won The FIFA U-20 World Cup With Lionel Messi Winning The Golden Boot – WATCH GOALS

On this day in 2005, Lionel Messi scored two goals for Argentina as they edged past Nigeria to win the FIFA U-20 World Cup. He received the Golden Ball and Golden Boot award. He was adjudged as the best player and had scored six goals, including two penalties against Nigeria in the title clash. 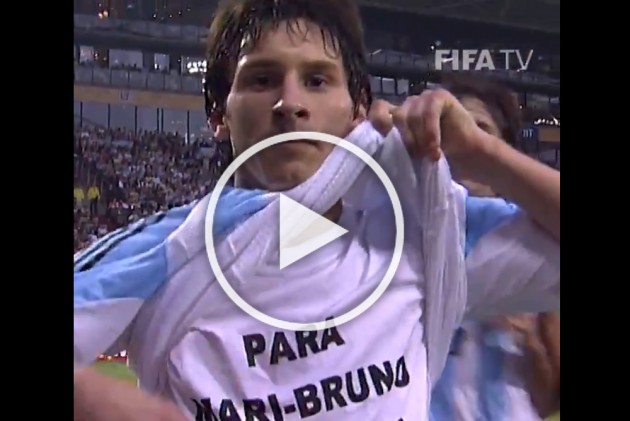 Since making his national team debut, Lionel Messi has been burdened with plenty of pressure, often having to win matches single-handedly. Although, he has been outshone in the Copa America, where Argentina faced semi-final elimination at the hands of Brazil, the Barcelona man is crucial to his country's ambition on the field. With fans continuously criticising him for not winning any major international honours (although he was won the 2008 Olympics), it was different for him when he was younger. On this day in 2005, Lionel Messi single-handedly won the FIFA U-20 World Cup for his country, drawing comparisons to Diego Maradona, who won it in 1979.

His displays were so magnificent during the competition, that he received the Golden Ball and Golden Boot award. He was adjudged as the best player and had scored six goals, including two penalties against Nigeria in the title clash.

ðÂÂÂÂÂÂðÂÂÂÂ¦ðÂÂÂÂ·ðÂÂ¤©#OnThisDay in 2005 @Argentina won the #U20WC, with Lionel Messi adding the adidas Golden Boot AND adidas Golden Ball to his haul ðÂÂÂÂª pic.twitter.com/Zd7duGprXB

In the tournament, Messi was initially dropped, missing out on the starting line-up in the first match against the USA, which his team lost 1-0. Reportedly, team members asked gaffer Francisco Ferraro to start Messi, who helped them edge past Egypt and Germany.

His brilliance was shown the knockout stages, as he scored the equaliser against Colombia. He also scored and registered an assist against Spain, and also scored against Brazil. In the final, he scored two penalties, as his side won 2-1 against Nigeria.

On this day in 2005, Argentina won the FIFA U20 World Cup, defeating Nigeria 2-1 with two goals by Lionel Messi. pic.twitter.com/2VoNxQlsCv

Although the Copa America campaign has been bittersweet for Argentina and their captain, Messi can still continue till the 2022 World Cup, where he will be 35-years-old. The team management have enough time to build a squad, around Messi, with the likes of Paulo Dybala and Lautaro Martinez complimenting him.