Djokovic is also vying for a record 37th Masters title. He is tied on 36 with fellow 20-time Grand Slam winner Rafael Nadal. 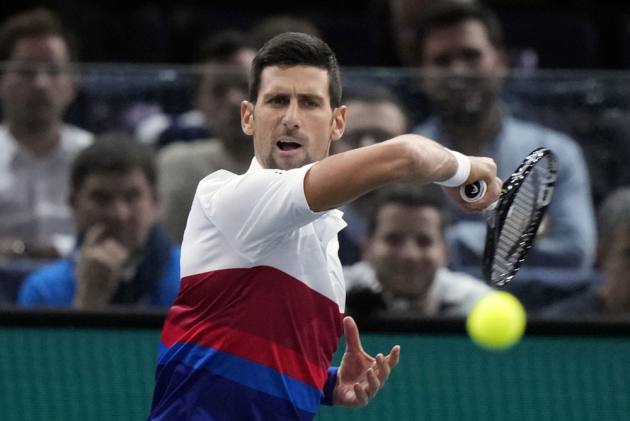 Djokovic is also vying for a record 37th Masters title. He is tied on 36 with fellow 20-time Grand Slam winner Rafael Nadal.

Djokovic, who next faces seventh-seeded Hubert Hurkacz of Poland, is playing in his first tournament since losing the U.S. Open final in straight sets to Daniil Medvedev in September.

"I felt good, considering that it was only second match back on the tour from almost two months of not playing a competitive match," said Djokovic, who had a walkover in the third round after Gael Monfils pulled out injured.

"I have to be satisfied, but also there are things that need to improve, and I know that."

He could face Medvedev, the defending Paris Masters champion, in the final again this Sunday. The second-seeded Russian saved three set points at 5-4 and 0-40 in the first set before beating French qualifier Hugo Gaston 7-6 (7), 6-4.

He next plays fourth-seeded Alexander Zverev, whom he beat in last year's final. Zverev was largely untroubled in a 7-5, 6-4 win against No. 6 Casper Ruud of Norway.

Zverev leads Medvedev 5-4 in career meetings, although Medvedev won the past three contests.

A double break of serve put Medvedev 4-0 up in the second set against Gaston.

But Gaston, who won seven straight games from 5-0 down in the second set against Spanish teen Carlos Alcaraz in the third round, rallied to 4-3.

As they did against Alcaraz, the home crowd at times cheered Medvedev's errors on serve and they roared in delight when he double-faulted on his first match point. They were silenced when he clinched victory on his next attempt.

"It was a tough match, I have to say, in front of a very difficult crowd. ... Hugo played very well, he’s very good," Medvedev said.

"He’s able to put spin on the ball and to also have drop shots on the same ball. You never know what he’s about to do, so it’s not easy for your footwork."

Following him onto court, Djokovic secured an early break for 2-0 but Fritz broke the Serb at love in the next game.

Djokovic had a love break of his own in the eighth game but slipped to 0-40 when serving for the first set after Fritz won a 26-shot rally, and then won the next point to pull back to 5-4.

But a rushed backhand into the net gave Djokovic a set point in the next game. Fritz saved it when Djokovic sent a forehand long, but Djokovic took his next chance when the 26th-ranked Fritz's shot landed out.

After they traded breaks at the start of the second set, Djokovic needed to save two break points in the third game before a much-needed ace on the way to a hold for 2-1.

Djokovic took control with a forehand winner to break Fritz and then held at love for 5-2.

Serving for the match, Djokovic cruised to 40-0 and sealed the victory on his first match point with a backhand volley at full stretch that just dropped over the net.

He is 2-0 against Hurkacz, who was thrilled at making the ATP Finals, which start in the Italian city of Turin on Nov. 14.

"It feels incredible. Growing up as a kid, seeing all those top guys playing in the Finals, it’s inspiring,” the 24-year-old said. “Now being among them, it’s very special because it’s just eight spots there."

Hurkacz reached the Wimbledon semifinals this year, beating 20-time Grand Slam champion Roger Federer in the quarters. He then broke into the Top 10 for the first time last month.

The 29-year-old Duckworth, ranked 55th, was in his first quarterfinal at Masters level.