For the second successive night, the Indian Premier League (IPL) has served a last-ball thriller with Chennai Super Kings (CSK) snatching victory from the jaws of defeat against Rajasthan Royals (RR)

Indeed a thriller! MS Dhoni provided the spark in the match with his batting and also his intimidating act. Poor umpires, they have become a joke. The defending champions needed 118 runs from the last over and Ben Stokes ended up conceding 21. 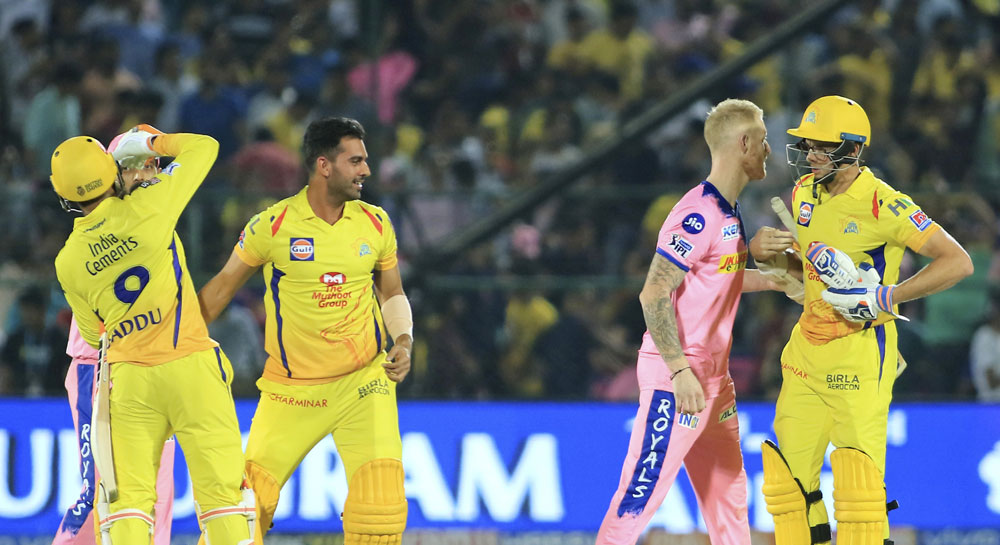 11:47 PM IST: Mitchell Santner is the new man for Chennai. A double from the next ball, and confusion surrounding no-ball call. Buzzer hit, but umpires deny signalling it even as CSK players arguing. 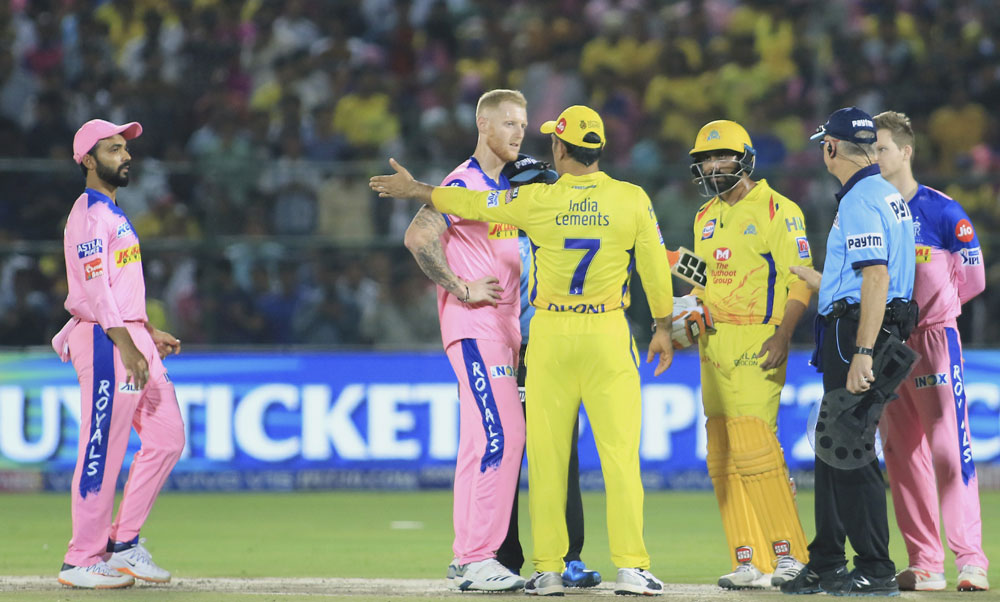 Dhoni, furious, enters the field. It has never happened in the past. Nobody knows what happened. But a double from the next ball. CSK need four from one. A wide. Now, CSK need three from 1. And Mitchell Santner smashes the last ball for a mighty six over long-on. Back-to-back thrillers in IPL. Chennai win by four wickets.

11:40 PM IST: What a start to the final over. Ravindra Jadeja falls while hitting a six, and MS Dhoni playfully hits his partner. A not ball a single to sweeper cover. Free hit and Dhoni takes a double. 8 from four. Then, Stokes cleans up Dhoni. FoW-144/6 (19.3 Over). Dhoni made 58 off 43. CSK need eight from three. Ben Stokes is on fire.

11:35 PM IST: Fifty for MS Dhoni in 39 balls. He needs some breathing and some stretching from the physios. Lots of running from the veteran and he was even hit on the head.  And he finds a lucky four off the last ball, behind the wicket. 12 runs from Jofra Archer's last over. His figures: 4-1-19-1. CSK-134/5. They need another 18 runs from six balls.

11:27 PM IST: Well, the Royals are catching everything. Shreyas Gopal takes a stunning catch at square leg, running backwards, to send back Ambati Rayudu (57 off 47). That happened off the fourth ball. Nine runs from the 18th over, bowled by Ben Stokes. CSK-122/5. They need 30 runs from 12 balls.

11:02 PM IST: Ben Stokes introduced into the attack. 10 runs from the over, including a six off the second ball, hit by Ambati Rayudu over extra cover. CSK-88/4 after 14 overs. They need another 64 from 36 balls.

11:56 PM IST: MS Dhoni is hitting sixes for fun in one of the biggest grounds. He lofts the five ball off the fifth ball over long on. Ten runs from Shreyas Gopal's third over. Dhoni and Ambati Rayudu have added 54 runs in 43 balls. CSK-78/4 after 13 overs. They need another 74 runs from 42 balls.

10:36 PM IST: Busy over. Riyan Parag continues with his second over. The legspinner concedes seven runs -- three singles and two doubles. CSK-39/4 after nine overs. They need another 113 runs from 66 balls. Time out.

10:29 PM IST: Debutant Riyan Parag gets his first over, and face to face to legendary MS Dhoni. Three runs from the over. CSK-27/4 after seven overs.

10:25 PM IST: What's that? Ben Stokes takes the catch of the season, for sure. Kedar Jadhav cuts it hard but Stokes takes a flight to pluck one from thin air at point. FoW-24/4 (5.5 Over). Maiden-wicket over for Jofra Archer. Chennai need another 128 runs from 84 balls.

10:14 PM IST: Chennai are in big trouble. Rahul Tripathi takes a brilliant outfield catch to send Faf du Plessis back. The South African plays a pull shot, only to find a catcher. CSK-15/3 after four overs. Five runs and a wicket from Jaydev Unadkat's second over. His figures so far: 2-0-10-1.

10:00 PM IST: Jofra Archer magic ends Suresh Raina's vigil in the centre. Run out. FoW-5/2 (1.5 Over). Raina played the fifth ball of the over with gentle hands to Archer at short fine, then called for a single. But he's was beaten by a direct throw at the bowler's end. Raina lost crucial ground while ball watching.  Five runs and a wicket from Jaydev Unadkat's first over.

9:34 PM IST: Final over of the innings, and Shreyas Gopal finishes with a flourish. He takes a double of the first ball, then hits a four to mid-off and a six over long-off off successive deliveries. A single to deep mid-wicket, then Jofra Archer hits a four, to fine leg. 150 for Rajasthan. A yorker and a single to make it an 18-run over. Shardul Thakur's figures: 4-0-44-2. RR-151/7, which is six runs short of par score here.

9:03 PM IST: A couple of boundaries from debutant Riyan Parag, offf the first and third balls of Imran Tahir's third over. Nine runs from the over. RR-98/5 after 14 overs.

8:52 PM IST: Hundred IPL wickets for Ravindra Jadeja, and the victim is Steve Smith. Caught at deep midwicket by Ambati Rayudu. FoW-78/5 (10.5 Over). And a big night for Riyan Parag. Five runs and a wicket from the over. RR/79/5 after 11 overs.

8:42 PM IST: Ravindra Jadeja strikes in his first wicket of the night. Kedar Jadhav pulls off a good catch at backward point. Rahul Tripathi, who just hit a four, is gone. FoW-69/4 (8.5 Over). Time out.

8:39 PM IST: Mitchell Santner on with his third over. Six runs from the over. RR have scored just 16 runs in the last four overs, losing one wicket. RR-64/3 after eight overs.

8:36 PM IST: Ravindra Jadeja gets his first over. Four singles from it. RR-58/3 after seven overs.

8:32 PM IST: Mitchell Santner on with his second over and wicket off the first ball. He had Sanju Samson caught at long on by sub Dhruv Shorey, after some juggling. FoW-53/3 (5.2 Over). Rahul Tripathi is the new man for Rajasthan. A single and a wicket from the over. RR-54/3 after six overs.

8:27 PM IST: Deepak Chahar continues with his third over. Good start. A single and two dots, then concedes a four to Steve Smith, who hits through mid-wicket. Five runs from the over. RR-53/2 after five overs. This is RR's fastest fifty this season. 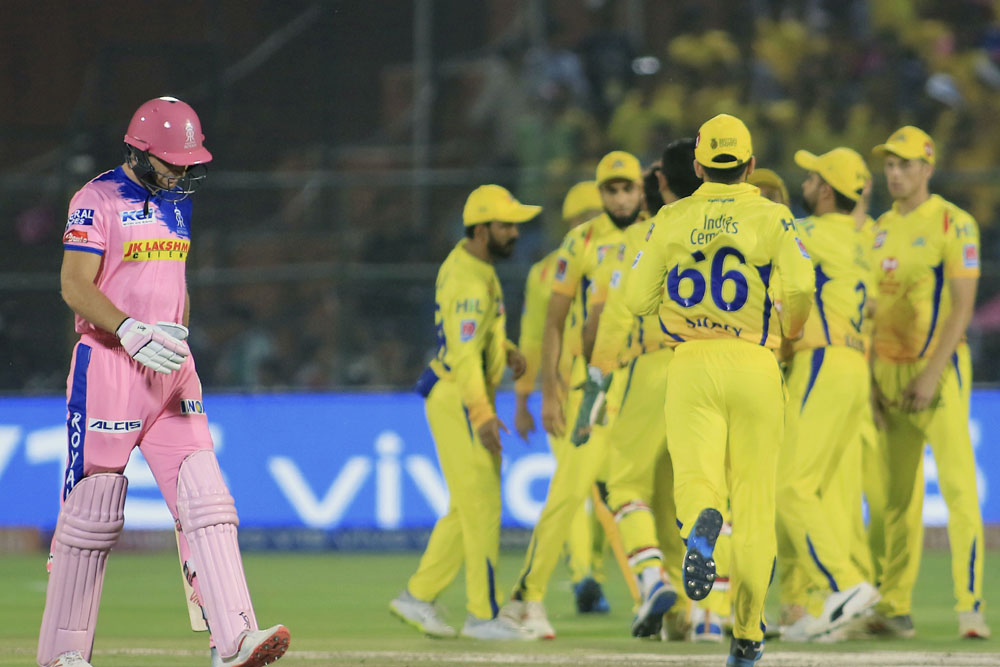 Jos Buttler walks the long walk after getting out. AP Photo

8:23 PM IST: Back-to-back boundaries for Rajasthan. Four off the last ball of the last over, and Jost Buttler hits the first ball of Shardul Thakur's spell for a four. Both brilliant pull shots. And, that's not all. Buttler hits a couple of more fours, a cover drive of the highest quality and a four to fine leg. But the last laugh to the bowler Thakur had Buttler caught at extra cover by Ambati Rayudu. FoW-47/2 (3.4 Over). Steve Smith is the new man. 13 runs and a wicket from the over. RR-48/2 after four overs.

8:15 PM IST: Deepak Chahar continues with his second over. A dot to Ajinya Rahane, but a four off the next delivery as the RR captain finds the gap in the cover area. CSK ask for a review for LBW against Rahane with Chahar convincing a reluctant MS Dhoni to go for it. The skipper agrees and it's three reds. FoW-31/1 (2.5 Over). Rahane made 14 off 11. Sanju Samson enters the fray. And a four to start his innings. 10 runs and a wicket from the over. RR-35/1 after three overs.

8:10 PM IST: MS Dhoni introduces Mitchell Santner into the attack, and the Kiwi spinner leaks 14 runs. Ajinkya Rahane hits the third and fourth balls for fours, through mid-wicket and over extra cover respectively. Then five wides. RR-25/0 after two overs.

8:05 PM IST: Deepak Chahar, who recorded a unique record of bowling most dot balls in an IPL match in CSK's last match, starts the proceedings. One leg bye off the first ball, off Ajinkya Rahane's pad. A dot, then Jos Buttler whips away a length ball for a four, to deep midwicket. A dot and a six, straight down the ground. 11 runs from the over.

7:45 PM IST: So, who's Riyan Parag? The 17-year-old from Guwahati is the son of former Ranji player Parag Das and former swimmer Mithoo Barooah. RR paid INR 20 lakh. And tonight, he becomes the second cricketer from North East, after Abu Nechim Ahmed, to feature in an IPL match. He is a batting all-rounder. Bats right-handed and bowls legspin. 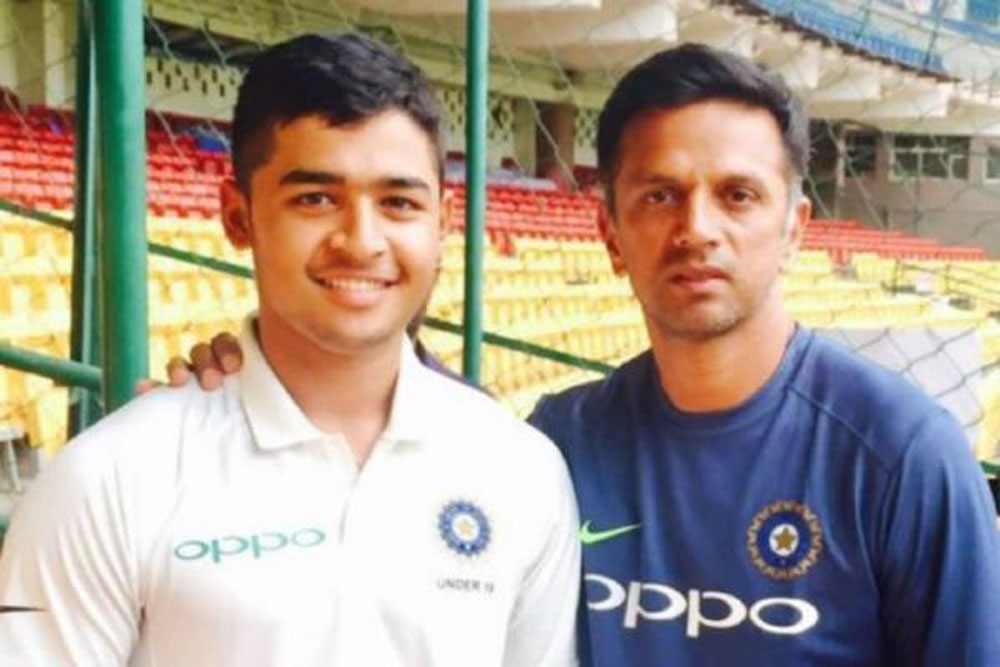 7:35 PM IST: A couple of changes for Chennai. Harbhajan Singh and Scott Kuggeleijn out, Mitchell Santner and Shardul Thakur in. 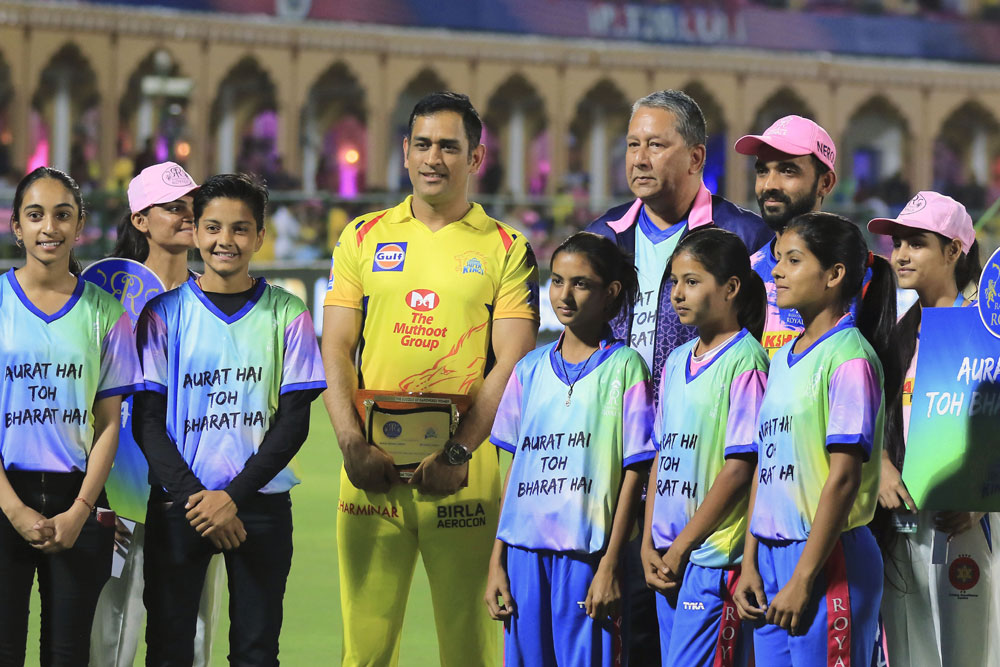 MS Dhoni and Ajinkya Rahane participate in a ceremony for the empowerment of women. AP Photo.

7:28 PM IST: The dominant flavour so far in IPL 2019 is that of the Caribbean. If the script is to be followed, then Jofra Archer has to turn up tonight. Dwayne Bravo is not fit. Meanwhile, MS Dhoni is looking to become the first captain to win 100 wins in IPL.