Ravi Shastri Has 'Absolutely No Regrets About The Book Launch', Says No One Got COVID From The Event

The fifth Test at Old Trafford had to be cancelled after Indian players led by skipper Virat Kohli refused to play with junior physio Yogesh Parmar also testing positive. 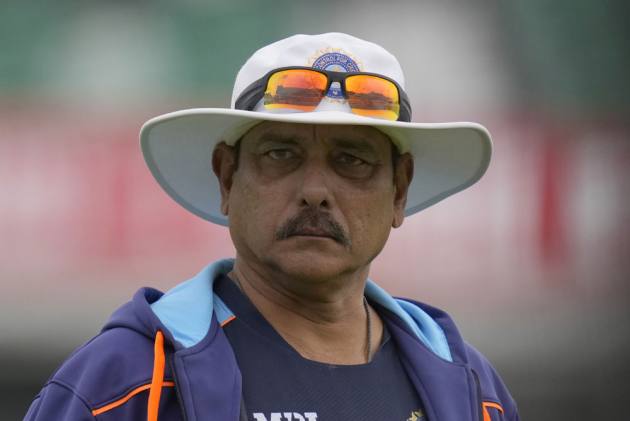 Many still believed that Ravi Shastri's book launch where around 150 unmasked guests mingled freely was the source of the infection which directly or indirectly led to the cancellation of the fifth and final Test between England and India at Old Trafford, Manchester last week. (More Cricket News)

But India head coach, who will step down after the ICC T20 World Cup later this year, said that he has "absolutely no regrets". "They’re not bothered if there is Covid or not. They just want you to win, and score runs,” he told The Guardian.

Shastri tested positive on the third day of the fourth Test at Oval. Then bowling and fielding coaches Bharath Arun and R Sridhar, deemed as close contacts, had to be isolated. The duo also later tested positive and all of them finished their 10-day isolation on Wednesday.

However, the fifth Test at Old Trafford had to be cancelled after Indian players led by skipper Virat Kohli refused to play with junior physio Yogesh Parmar also testing positive. Parmar was the only physio treating the players since head physio Nitin Patel also had to isolate being a close contact of the coaching staff.

Shastri was widely criticised for his conduct but the former all-rounder said that "There were about 250 people there and no-one got Covid from that party."

“It was funny because in my 10 days I didn’t have a single symptom barring a little sore throat. I never had any temperature and my oxygen level was 99% all the time. I didn’t take any medication through 10 days of my isolation, not a single paracetamol. I tell the guys: ‘Once you’re double jabbed, it’s a bloody 10-day flu. That’s it.’”

“They tried to make it that way but I wasn’t worried because incubation probably takes weeks. There were about 250 people there and no-one got Covid from that party. I’ve not got it at my book launch because it was on the 31st [August] and I tested positive on 3 September. It can’t happen in three days. I think I got it in Leeds. England opened up on 19 July and suddenly the hotels were back, lifts were back. No restrictions,” the 59-year-old added.

Shastri also said that England and Wales Cricket Board (ECB) would "not lose a penny" from the abandoned Test as India will return to play.

"The ECB have been outstanding and their relationship with Indian cricket is tremendous. I don't know if it's a stand-alone Test next year or they give them an extra two T20 games, but the ECB will not lose a penny because of the relationship that exists. In 2008 when we had the (terrorist) blast in Mumbai, England came back and played the Test. We don't forget that."

Shastri also confirmed that the T20 World Cup would be his last assignment as the head coach of the Indian cricket team.

“I believe so because I’ve achieved all I wanted. Five years as No 1 [in Test cricket], to win in Australia twice, to win in England. I spoke to Michael Atherton earlier this summer and said: ‘For me, this is the ultimate – to beat Australia in Australia and win in England in Covid times.’ We lead England 2-1 and the way we played at Lord’s and the Oval was special.

“We’ve also beaten every country in the world in their own backyard in white-ball cricket. If we win the [T20] World Cup that will be the icing on the cake. There is nothing more. I believe one thing – never overstay your welcome. And I would say that, in terms of what I wanted to get out of the side, I’ve over-achieved. To beat Australia away and to lead the series in England in a Covid year? It is the most satisfying moment of my four decades in cricket,” Shastri added.