A reported 20 bombs were dug up at the club's Trigoria headquarters, as Roma prepared to build a new training pitch 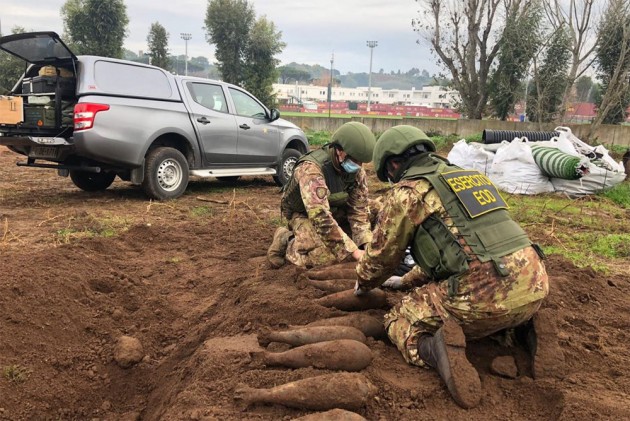 Roma have revealed the Italian army's bomb squad was called to their training ground following the discovery of Second World War explosive devices at the facility.  (More Football News)

The alarming find at the club's Trigoria headquarters occurred this week, with local media reporting around 20 bombs were found by a technician who was beginning the groundwork for putting in a new pitch.

"I was there to build a football field," the unnamed technician told police, according to newspaper Il Messaggero.

"I never imagined finding myself digging a few centimetres from the bombs."

He reportedly said he noticed "pieces of iron coming out of the ground", adding: "I am not an expert in warfare, but I thought they could be bombs and, therefore, I asked for help. I was afraid."

Roma confirmed the dramatic situation on Saturday, stating on Twitter: "A big thank you to the Italian army and their bomb squad, after they safely and successfully removed a number of devices dating back to the Second World War from the club's training centre at Trigoria this week."

The club published a picture that showed a line of small bombs that had been brought up from below ground.

Il Messaggero reported all activity at the training base was stopped when the discovery was made. Three bombs were said to have been found initially and fire brigade experts identified them, resulting in the call for bomb defusal experts and the uncovering of further explosives.

Roma travel to face Napoli in Serie A on Sunday.

Well, this doesn't happen every day...

A big thank you to the Italian army and their bomb squad, after they safely and successfully removed a number of devices dating back to the Second World War from the club’s training centre at Trigoria this week!  #ASRoma pic.twitter.com/8HDiURbxTe