It rained overnight in Sochi and on Saturday morning, with some lightning. The track is laid out on a flat part of the Black Sea coast, making it harder for water to drain away. 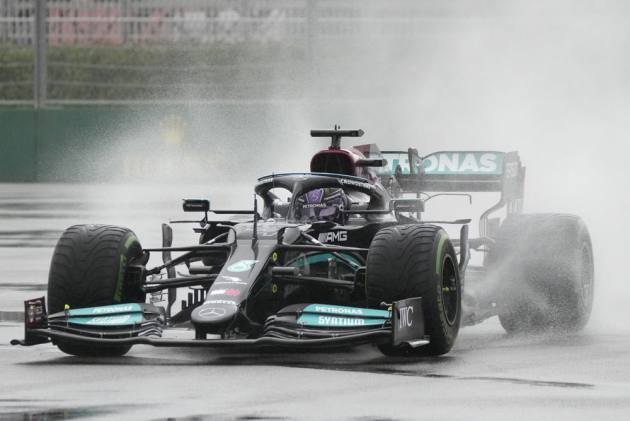 Heavy rain caused the third practice session for the Russian Grand Prix to be canceled Saturday and raised doubts over whether qualifying can be held as scheduled. (More Sports News)

It rained overnight in Sochi and on Saturday morning, with some lightning. The track is laid out on a flat part of the Black Sea coast, making it harder for water to drain away. That causes areas of standing water on the track and low grip. Visibility was expected to be poor because of the dark skies and the spray thrown up by cars.

The stewards agreed to a request from race director Michael Masi to cancel the practice session on safety grounds.

Masi said that light levels would be crucial to deciding whether to hold qualifying Saturday afternoon.

“With weather conditions like this, obviously light diminishes far earlier (than sunset), so that will ultimately be our cut-off point,” Masi said.

"If qualifying isn't able to happen today, as we've seen a few times before in the past, then we will redo a program and hold qualifying on Sunday morning.”

Sunday is also likely to have some rain. The last race to have qualifying on a Sunday was the Japanese Grand Prix in 2019 after a typhoon meant all events on Saturday were canceled.

Valtteri Bottas was fastest and Lewis Hamilton second in both Friday practice sessions. Those were dry. Max Verstappen leads the championship standings but will start from the back of the grid in the race Sunday because he changed his engine.